You are here: HomenextPlacesnextCOOLATTINnextPreban Graveyard 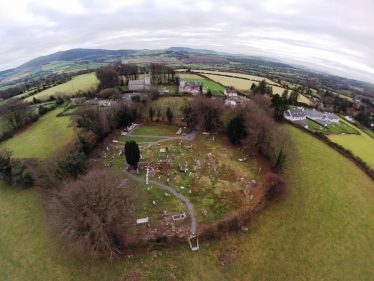 Preban cemetery is located in the town land of Preban surrounded by the town lands of Kilballyowen Tomcoyle Tankersley and Ballinglen and in the parish of Annacurra. To the east stands Croghan Kinsella and to the south and west stand Lugnaquilla and Keadeen. This graveyard has served the needs of the local communities and beyond for centuries. During the course of the 20th century the graveyard suffered from neglect, perhaps because of lack of use, and became seriously covered in vegetation. During the period 1937 to 2012 only 71 people were buried there, less than one per annum, so it is easy to understand why so little attention was paid to its deterioration.

In 2010 a small group of local neighbours came together and set up a committee with the sole aim of cleaning away the overgrowth of vegetation and generally to make the area more accessible to anybody who wanted to or who had to visit. The committee at the time consisted of;

The graveyard is owned by Wicklow County Council, so with their kind permission work commenced almost immediately. The centre of the graveyard, almost one third of the entire area was completely covered by three or four Laurel trees and the surrounding ditches were growing in towards the centre. So with saws, axe, shovel, spade, chainsaw and a variety of implements provided by the volunteers  the  intrepid team set to work. After a couple of weeks at work we were inundated with the amount of timber, weeds, briars and bushes that had been accumulated. At that stage Mr Eddie Whitty arrived with his tractor and trailer and spent a couple of weeks drawing the rubbish away.

The clearance unearthed a treasure trove of 18th century graves that had not been seen for more than 50 years. Having discovered the treasure that we had we decided that permanent help would be required to keep the graveyard in reasonable condition, on an ongoing basis. To this end we sought assistance from FAS and we were very fortunate to encounter Mr John Mullen FAS manager in Tinahely who has been extremely supportive of the project. In order to have the FAS workers employed we discovered that we had to provide the appropriate equipment.

Although we had formed a committee with officers, including a treasurer, we had no funds. We approached Father Hammel, the parish priest in Annacurra, with a request to hold a church gate collection, to which he very kindly agreed. The collection was a huge success and the generosity of the Annaccurra parishioners was remarkable. We were then in a position to purchase the equipment required. Since then we have had excellent co operation from all of the FAS workers assigned to the project, but in particular Mr Willie Rooney, Mr Joe Kelly and Mr Mick Lott. They have kept the grass cut, ditches under control and all of the day to day work required. This support has been invaluable.

Following the clean up, the next stage was to record all of the graves and to copy, as far as possible the inscriptions on the headstones (see files of transcribed inscriptions at the end of this article). A number of the headstones dated back to the 1740’s and 1750’s. The oldest one so far was dated 1738, so you will understand that it was quite difficult to read some of them. In several cases quite a few visits were made in order to finish the copy. It became clear in the course of this exercise that morning sunlight was very helpful for the task.

It was possible to read the inscriptions on 130 graves and the names of 288 people. The breakdown was 188 men and 100 women.

Of the 288 people identified the most common surnames were;

The most common Christian names recorded were;

Please see the project’s transcribed tombstone inscriptions in the document below and additional inscriptions by Ciaran O’Byrne in the following documents.

Inscriptions for nearby Whitefield/Killaveney Old Cemetery by Ciaran O’Byrne can be accessed here: