You are here: HomenextPlacesnextCOOLATTINnextRathgall Hillfort 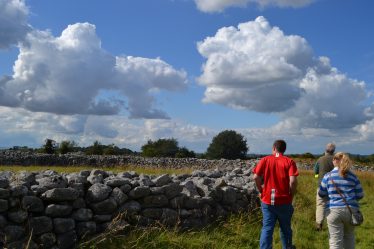 zoom
Visitors on a guided walk of Rathgall organised by the local community for Heritage week 2011
D. Burns

“Rathgall was a site of quite exceptional importance in the centuries spanning the birth of Christ, an importance that was clearly pan-European. The variety of structural information that the excavation yielded is unprecedented in the Bronze Age and the extraordinary concentration of artifactual evidence from the site has not been matched elsewhere in the country. Rathgall opens a wide range of questions concerning, not merely the nature of the Ireland’s later Bronze Age, but also the role of the hillfort in contemporary cultural developments” Prof. Barry Rafferty 2004

Rathgall (An Ráth Geal) is a National Monument near Shillelagh in South West Wicklow  in the ownership of the OPW. It is an impressive  hilltop settlement enclosed and defended by four concentric ramparts (walls). The outer three ramparts are stone and earthen banks and are thought to be prehistoric in date, while the fourth innermost enclosure is of drystone construction and possibly dates from Medieval times.

The site underwent extensive archaeological investigations, commencing in 1969 by Professor Barry Rafferty. There was a huge amount of local interest and curiosity in the excavations at that time partly due to the employment of  local people to assist the excavations  and partly due to the wealth of artefacts uncovered. The investigations found evidence that this was the site of an important and busy Bronze Age factory for metalworking (axe and spearheads, swords) and for pottery, jewellery and glass beads. In total over 50,000 pottery fragments were found!

This spectacular Wicklow monument remains arguably one of our least known. Take the time to visit, and while out and about make sure to visit another gem, the nearby Aghowle early medieval church.

Click below to download the visitor guide to Rathgall Hillfort and Aghowle Church, produced by the local Rath Community Group with support of the Heritage Office.

A photograph of Rathgall won first prize in the 2014 Wiki Loves Monuments photographic competition, see here and will now go forward to the global competition with more than 40 countries participating. Quick, get there before its famous!