You are here: HomenextPlacesnextCOOLATTINnextShillelagh, Coal and Brexit!

In a week that has been dominated by Brexit, it is interesting to reflect on the unlikely connection with a charming little village in South Wicklow – Shillelagh. This is one of the prettiest villages in Ireland and is very much a “estate village”, with the houses and main buildings all having been built by the local “big house”, in this case, Coolattin, Irish home of the Fitzwilliam family until the 1980’s.

The Fitzwilliams were, by the standards of the time, liberal, progressive and fair landlords, and provided  employment and education for their tenants. However, it is interesting to see how the family fared in the twentieth century when social changes swept through Europe, following two World Wars.

Their wealth was immense. At one stage their Irish holdings amounted to over 85,000 acres – more than a fifth of Wicklow, and their Irish home, Coolattin was no small house, but it paled in comparison with their main house – Wentworth Woodhouse, the largest privately owned house in Britain. Consider this – 300 rooms, over 250,000 square feet with five miles of corridors! And stuffed to the gills with wonderful furnishings, paintings, sculptures and surrounded by a large park with a famous pink shale avenue. One of the reasons for their wealth was the fact that their lands were built on large coal seams and at one stage they employed over 115,000 miners and Peter, the Eighth Earl, was considered to be the richest man in England and offended Labour Party Minister, Manny Shinwell by paying 8,000 guineas for a race horse during the second world war. He was to get his revenge on the Fitzwilliams by requisitioning their mines and insisting on open cast mining taking place right up to the back door of Wentworth House, tearing up the park lands, as illustrated by this photo, published in The Sphere. 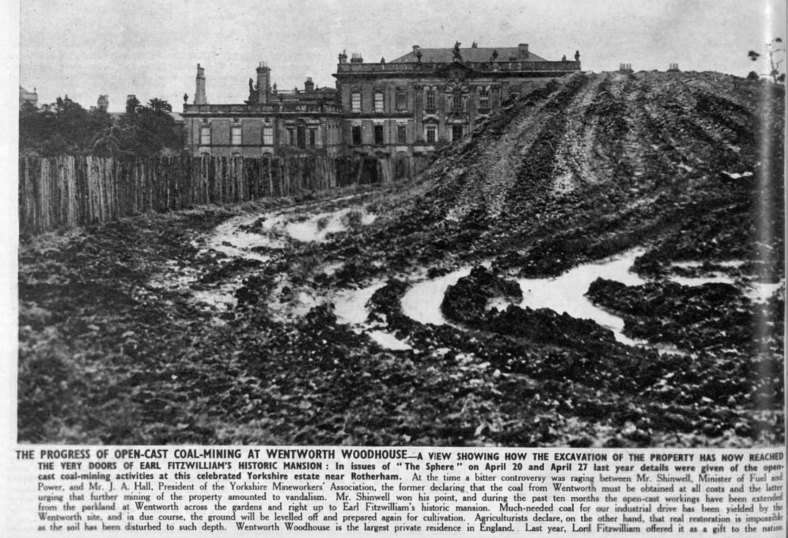 Peter Fitzwilliam was a colourful figure. He was married at a young age to Olive Plunkett, a member of the Guinness family . Theirs was a large wedding in St Patrick’s Cathedral, followed by a reception in St Anne’s, Raheny, now a large public park in north Dublin. The marraige produced one daughter, Juliet, but Peter seems to have had a roving eye, and the couple became estranged. In 1946 he met Kathleen ‘Kick’ Kennedy, sister of John F Kennedy and widow of the heir to the Duke of Devonshire. Their affair caused a rift between Kick and her family who disapproved of Fitzwilliam, his past, and the fact that he was Protestant. In an effort to gain the approval of Joe Kennedy the couple agreed to meet him in Paris and chartered a private plane to fly to France. They flew into a storm and all on board were killed.

Both the 9th and 10th Earls were childless and the title died with the death of the 10th earl in 1979. By this stage Wentworth had become a teacher training college and was sold on the death of the tenth Earl. Today, moves are afoot to restore the house and parkland to its former glory.

And what of the link between Shillelagh and Brexit? Juliet, daughter of Peter and Olive Fitzwilliam, consistently appears in the rich lists – currently estimated to be worth £45 million. Her daughter, Helena De Chair married one of the most ardent Brexiteers – Jacob Rees Mog.  Occasionally referred to by fellow parliamentarians as the “right honourable member for the Eighteenth Century”, he is socially conservative, extremely wealthy, and has been a controversial figure in the chaos that is the run up to Brexit. And who knows what the future holds for the United Kingdom after March – the Rees Mog family might yet be in the queue for Irish passports!!!