The Tragedy of Daniel Cunniam 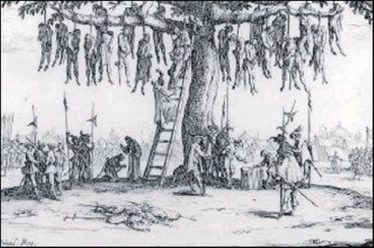 zoom
The 1640s were an unparalleled age of atrocity in Ireland, although this image is from similarly terrible times being experienced in France
The Irish Independent

Historian Dr. Emmett O’Byrne continues his new historical series focusing on ‘The Garden County’s’ past.  In particular, Dr. O’Byrne will reflect on the more peculiar aspects of Wicklow’s history.(Wicklow People)

ONE of the most horrible events of the 1640s was the ordeal endured by Daniel Cunniam on Glenealy Bridge in early 1642, an act reported to Charles I of England. It is important to place Daniels’s ordeal firmly within its time, as it could be fairly said that the 1640s were an unparalleled age of atrocity in Ireland.

In late October 1641 rebellion broke in Ulster, spreading throughout the country.

In Wicklow (described ‘as the echo of Ulster’), the rebellion was led by the O’Byrnes and O’Tooles.

They were determined to tear the plantation of east and south Wicklow up by the roots, achieving it with considerable brutality.

Appalled by the vista of rebellion so close to Dublin, the lord justices dispatched Sir Charles Coote to Wicklow on 27 November. Coote was fearsome and thorough going, ransacking Wicklow town – putting men and women to the sword without distinction on 29 and 30 November before defeating the O’Tooles near Kilcoole on 1 December.

One of Coote’s lieutenants was a Scot named Lawrence Crawford (1611-1645), a colonel of a regiment of 600 men. Crawford was an experienced soldier, having served Gustavus Adolphus of Sweden.

He had been in Ireland a short time before the rebellion broke.

But he and his regiment were to acquire an extraordinary reputation for brutality.

For on hearing of Crawford’s approach in November 1641, the inhabitants of Bullock Co. Dublin took to their boats to escape him but were overtaken at sea and thrown overboard to drown.

In early 1642 Crawford was dispatched to Wicklow with orders to: ‘… slay and destroy all the rebels you can there find. You are in that county to destroy all rebels goods, houses, corn and to take their cattle’.

He executed his orders to the letter, as the journal of Captain William Tucker attests.

Tucker wrote ’20 January (1642/3) this day, Colonel Craford sic (Crawford) is come here with his party, who brought here with him above 5,000 sheep and 5 or 6 hundred cows., besides he killed of the enemy about one hundred’.

It was presumably then that Daniel Cunniam had the misfortune of encountering Crawford’s troops.

The story goes that one evening Daniel was crossing over old Glenealy bridge on his way home with a cartload of straw.

There he was stopped by soldiers under Captain Gee (sometimes described as Captain Rea) who demanded to know where a priest was hiding, accusing him of being rebel.

The accounts describe Daniel as being an old man, a freeholder and that he was not a rebel.

Indeed, he was held locally to be: ‘… very averse from the foul actions of the rascal multitude’. Yet, he refused to betray the priest, leading Gee to order his men to place him in stocks before putting his feet in the fire.

This ordeal went on for hours, as the papers say that the old man’s feet were reduced to ashes.

Even so, he refused to give information – dying there at the hands of his tormentors.

The horror was unprecedented even though atrocities were common.

In October 1642 Daniel’s ordeal was discussed at the General Assembly of Catholic Confederation at Kilkenny, forming part of the grievances presented to Charles I in 1643.

The memory of what happened was preserved by the publication of a pamphlet in 1662 in London.

It has also received attention from Thomas Leland’s History of Ireland (1773), while the great Daniel O’Connell also made mention of it in his Memoir of Ireland: Native and Saxon (1843).