The Great Wicklow Gold Rush of 1795

Today the Goldmines river valley is a quiet south Wicklow Glen, with a road and a river running down its length and room for very little else. However, this picturesque valley was the scene of one of the strangest events that ever took place in Wicklow or indeed Ireland for that matter. For here in 1795 Gold fever struck and nothing has ever been the same.

This gold deposit is the only one of its kind to have been commercially worked in recorded times. However, gold has been found in the area since man first came to Ireland. According to the Annals of the Four Masters the gold was smelted in the forests of the kingdom of Culann which was situated in the hills between Bray and Wicklow. This gold probably originated here also, as workings dating from the Bronze age have been found in the area. The gold was used in the making of ancient gold ornaments such as Lunalae, Fibulae, Tores and Gold Collars dating from around two thousand to four hundred B.C. for which Ireland is justly famous. The national museum has a large collection of 500 pieces of which the Great Clare find of 1854 (174’/2ozs) being the largest single discovery.

The Goldmines river lies immediately north of Croghan Kinshelagh mountain just above Woodenbridge. At the end of the 18th Century gold was discovered in the sands and gravels of the rivers which flow off the northern and northwestern flanks of the mountain. The sands of the Goldmines river were the richest by far though much gold was also found in the nearby Coolbawn and Clone rivers. Since then the rivers have been worked on 14 different occasions producing between 7,400 and 9,000 ozs. of gold. 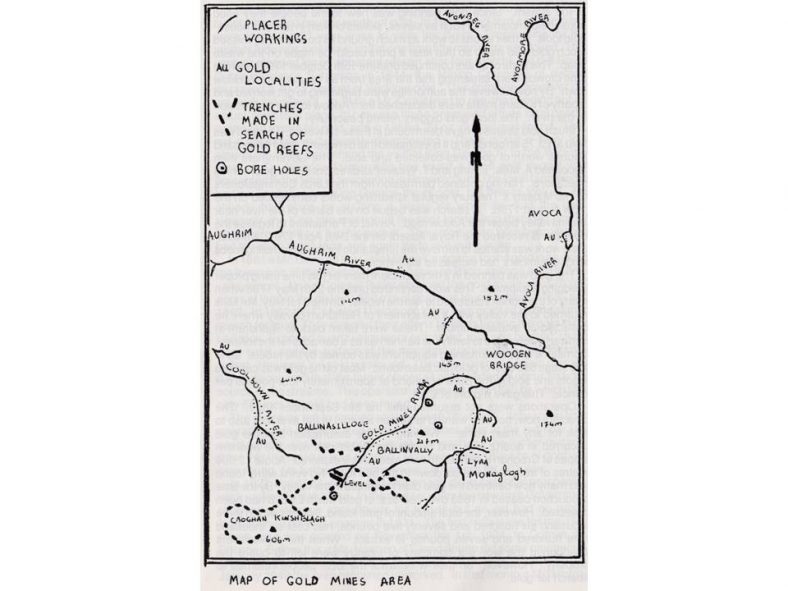 The first to show interest in the Goldmines river was a local teacher called Donaghoe. About 1785 a local boy John Byrne who was fishing in the river found a nugget of gold weighing 1/4of an oz., which was sold in Dublin. However, this didn’t attract much local attention as the gold was thought to be lost property. However, from then until 1795 a Dublin jeweller bought four to five ozs. of gold per year from a local person who was quietly working the river on his own. In early September 1795, it became widely known in the locality that gold was to be found in the sands and gravels of the Aughatinavought (now the Goldmines river) between the areas of Ballinvalley and Ballinasilloge. Immediately all other work ceased as gold fever swept the countryside. About 300 women besides huge numbers of men and children were at work. They found that the most productive stretch was from 200 yards below the Ballinasilloge ford to 150 yards above it. The digging extended up to 30 yards from the edge of the stream. Since gold panning was new to the people they used household implements such as sieves, skillets broken in two and house­hold tools. I n their efforts to work as much ground as possible they missed much gold. So much so that later a profit could be made on the waste heap. This state of affairs continued until the 15th October 1795 by which time crowds were streaming into the area from as far away as Wicklow town. By now however the authorities were beginning to get worried and a party of Kildare militia were dispatched from Arklow to take possession of the river. The local gold diggers retired peacefully.

Much gold seems to have been found in these six weeks. The gold was sold at £3.75 an ounce and it is estimated that between 3 and 10 thousand pounds worth of gold was collected and sold. The Government then appointed A. Mills, T. King and T. Weaver as directors in charge of mining operations. Having obtained permission from the Lords Commissioners of His Majesty’s Treasury regular streaming works commenced on the 12th August 1796. A search was begun on the banks of the river near Ballinavalley below the Arklow road. An Act of Parliament to legalise the operations received the Royal Assent on the 24th April 1797. Immedi­ately work was started to remove the temptation for the assembling mobs whose numbers had increased alarmingly.

The gold was panned in a more efficient manner this time using proper dredging equipment. This work continued until the 26th May 1798 when many of the workers deserted to join the rebels. On the 31st May, Mr. Mills returned to the valley with a detachment of Rathdrum cavalry where he collected all available timber. These were taken back to Rathdrum in carts and were used to fortify the flannel hall as a barracks for the military. Sometime later all remaining equipment was burned by the rebels. Up to this stage 555 ozs. of gold had been found. Most of the gold was cast into ingots and sold to the Bank of Ireland at approximately four pounds per ounce. This gave a profit of £331.

Operations were not resumed until the 8th September 1800. The directors now, not only wanted to search for gold in the river, but also to look for any main veins. Working on the assumption that the gold occurred in quartz rock and beside the Goldmines river the northern slopes of Croghan Kinshelagh were extensively explored. About 12,000 metres of trenches were cut down to the bed rock. No veins were found and many now believed the gold didn’t originate in the valley. By the time production ceased in 1803 over 388 ozs. of gold worth £1,528 had been collected. However, the total amount of gold found, 944 ozs. worth three thousand six hundred and seventy five pounds, had cost six thousand nine hundred and seven pounds to extract. When the Government abandoned the works a company of infantry were left to guard the property. However, on their withdrawal the local people returned to search for gold.

It has been estimated that from then until 1840 they collected almost twenty thousand pounds worth of gold. In 1840 Crockford and company were granted a 21 year lease to work the rivers. Prospecting for the mother lode was extensive and at one time fifty men were employed. This venture stopped for no apparent reason after four months. At the Royal Dublin Society’s Exhibition in 1844, the Mining Company of Ireland displayed a 40 oz. nugget of Wicklow gold. This company however did not work the deposit. In 1849 a Mr. Collet tried to resume panning but no actual work took place. In between these organised efforts local people continued to pan for gold, and in 1856 a 24 oz. nugget was found. This, not surprisingly, subsequently disappeared. There is still a story told around the area, concerning the visit of King George IV to the Wicklow area. A Co. Wicklow farmer who had found a large gold nugget was presented to the king at a reception in Powerscourt. The local farmer who had no English, gave King George the nugget, but only to look at. He already had plans for starting a better life when he sold the gold. However, the King misunderstood the poor farmer and thanking him for his generous gift put it in his pocket. The unfortunate Wicklowman then had to return to his farm and again try to eke out a living.

In 1861 a Mr. Barry, of the Gold Mining Company, found gold in panning the lower part of the Goldmines river between Ballinasilloge and Ballina­valley upper. Also a Colonel Butler obtained the gold royalties of 70,000 acres of land in the district. 850 ozs of gold was found between 1857 and 1862. In 1862 the Carysfort Mining company was granted permission to search for gold. They directed their efforts towards finding the gold in the bedrock. Exposed quartz veins were examined, rock was blasted, shafts were sunk, and the surface of the mountain cratered to a considerable extent. However, no gold was found. Then the River was again panned. It was discovered that the larger pieces of gold tended to occur near the source of the streams. This operation continued until 1865 by which time only 52 ozs of gold had been found.

The river was not examined again until 1876 when F. Acheson started operating. He concentrated on the Goldmines river at the red hole. He used narrow, shallow, wooden troughs to wash out the lighter material. After this the residue was panned. However, only 181/2ozs of gold was ever found. No further exploration was carried out for 40 years.

In 1921 and 1924, Hume and McDonagh did substantial prospecting work under a British lease. In the next six years the new Irish Government received numerous applications for leases but as yet had no proper legislation. This was enacted in 1931. The first Irish lease for the Gold mines area was granted on November the 1st, 1934, to Cornyn and Briscoe. Before this a Mr. Norman of Glendalough did some prospecting and in two years found 1½ ozs of gold worth ten pounds. From then until January 1948 the area remained unworked. In that month a Mr. Morgan of Dublin was granted a prospecting licence. On the advice of a diviner three bore holes, all in Ballinavalley upper, were drilled to depths of 6.5 metres, 9.1 metres and 13.7 metres, respectively, Not surprisingly no gold was found. In September 1952 three applications were made for a licence due to the finding of a 3 – 5 oz nugget by a Mr. M. T. O’Regan of Rathdrum, who was a mining engineer at Avoca. On the 28th February, 1954, two licences were granted to Mr. O’Regan and to J. and W. Davoren of Woodenbridge. Returns were poor and by March 1955 the Davorens had found no gold, while Mr. O’Regan had found only 2 ozs. In 1954, W. Davoren died and Mr. J. Davoren alone applied for a renewal. This was granted in 1955. During the following year he found 6 dwt’s of gold He then formed the Croghan mineral company with the help of local people. However, no gold has since been found. Nobody has searched since then for gold but recently a licence was granted to Avoca Mines Ltd.

All the gold so far has come from the rivers of the area except from one tiny vein on Croghan-Kinshelagh. According to Kinahan in 1878, “ the gold usually occurs as eyesill or tiny scales but in some localities as large gold grains while large nuggets are found from time to time. It generally occurs as free particles though sometime adhering to quartz”.

The fact that the gold has adhered to quartz has meant that numerous fruitless searches of the local rock were carried out. Also despite the fairly large amounts of gold found, only the local people seem to have made a profit. However, none became rich through their discoveries. Only the first organised effort had a chance of making a profit but this seems to have gone up in the fires of rebel raids. There is still great discussion as to the origination of the gold. A small number of people believe the gold to be part of the gold found in tiny quantities in the copper ore at Avoca. However, most of the companies who have worked the gold have prospected for the mother lode in the quartz veins. If further interest is taken in the gold deposits, the question of the source of the gold could probably be solved by the use of modern sophisticated methods of explorations. Until then, the mother lode, if in existence, remains an enigma.

The Geology of Ireland by C.H. Holland.

Geology and Scenery in Ireland by J.B. Whitton.

The Geomorphology of the British Isles.

Gold in Ireland by T.J. Reeves.

Geology and Mining in Co. Wicklow 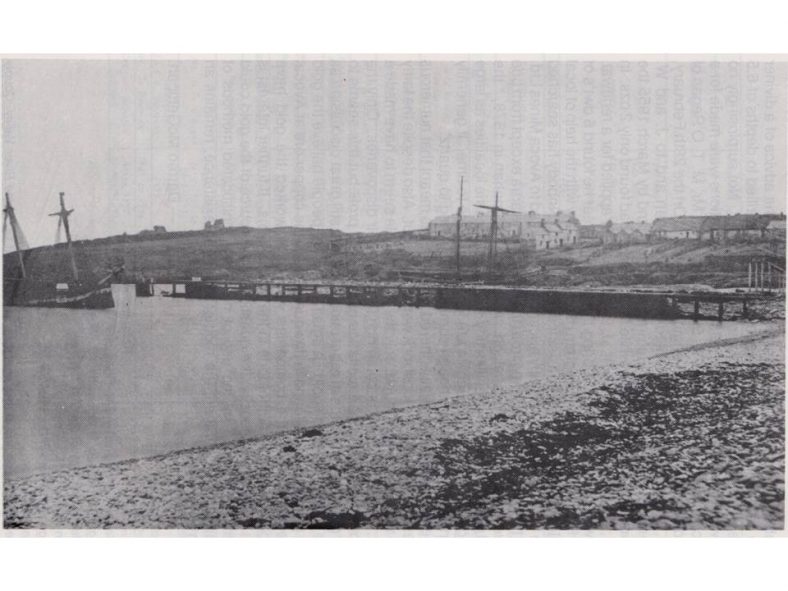 This photograph, taken in 1861, shows a vessel aground in the area in which the “New Draper” was lost in February of that year