‘Most of us at some time or other, brood upon the people who have walked where we have walked and are now gone. lf they were our ancestors, it is a wholly reasonable curiosity to know who they were and what the were like, and what, if anything, we have inherited from them‘

Tracing family history can best be compared to a jigsaw, where, as each piece is allotted its place, the eventual picture becomes clearer.

The book “The People of Ireland”, based on a series of lectures by prominent Irish historians*, indicates how globally diverse are the origins of our population. Tracing, therefore, can take one’s research to many parts of the world, and locating our kinsfolk can be both as exciting and frustrating as the solving of an Agatha Christie mystery. How to undertake your research and at the same time derive the maximum enjoyment from it, can be outlined with the help of the following guidelines.

Always begin your research with your parents — then your grandparents, and so on backwards in time – never the reverse. Also, as we are products of many families, it is just as important to trace your mother’s line as that of your father’s family. On page 27 you will see an example of a pedigree chart produced by the Irish Genealogical Research Society. This can form the basis of a more complete family tree as research progresses.

The first and best source of information are our elderly relatives. Particularly in a rural area where a family may have been resident for centuries, stories have often been handed down, by word of mouth, which can take one back many generations. lt is wise, and useful, where possible, to record on tape your conversations with them as it ensures that nothing of the content is missed. At the same time, one must exercise great caution in separating fact from fiction, as family myths abound which become more exaggerated with time and telling.

ln addition, the importance of checking and double checking each detail of research cannot be overstressed, including much of the printed word which is not always accurate. 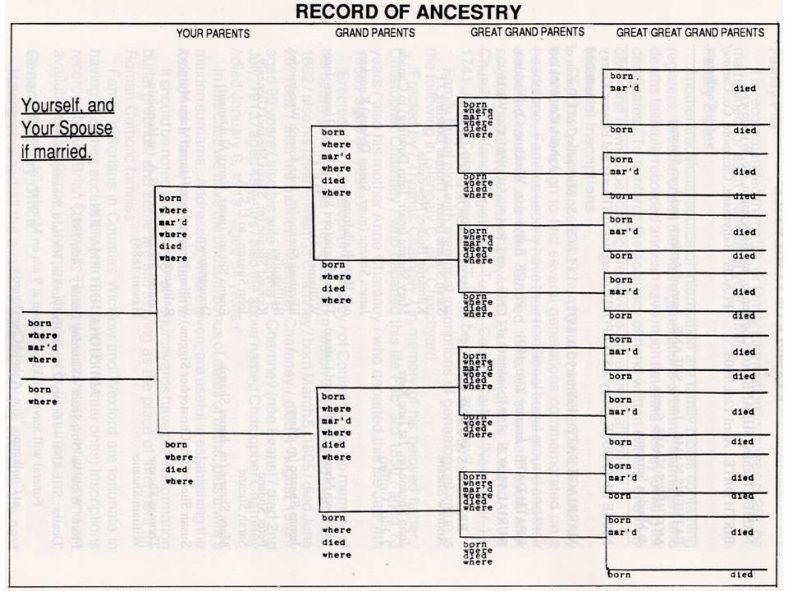 It is recommended that a file, or family information form (see p. 28), be maintained for each member of your family.

Another traditional source of information are family bibles containing registers. In some cases they have generations of births, marriages and deaths faithfully recorded and can save much time and money looking for certificates. To reinforce the accuracy of hand written entries, one may often find newspaper cuttings relative to the events, attached.

Of primary importance is the churchyard or cemetery where one may be fortunate enough to find several generations commemorated on a headstone. Families usually have theirtraditional burial ground and their deceased relatives are often returned there for interment even after several generations elsewhere. One example of this is found in the Church of Ireland Registers of Tullow, County Carlow, ‘November 13, 1741 James Cole carried from Tulio to be buried at Gorey’!

Family burial plot with memorial inscriptions of genealogical value is the following in Glenealy C. of I. Churchyard.

ln this case we have the unusual bonus of dates of births, plus a wife’s maiden surname. Addresses, where given, are useful in establishing the location of a family at a particular time.

It should be noted that many C. of l. churchyards have pre-Reformation burial grounds, and some are still Sewing as the place of interment for Roman Catholic families.

Family historians in Counties Wicklow and Wexford are fortunate in having all of their accessible pre-1864 (and some later ones) Inscriptions recorded by Mr. Brian Cantwell. These were privately published and are available for reference in the main libraries of both counties.

Having obtained all the available data from these sources, the next step is the Registers of the General Registry which is located in Lombard Street, Dublin. Compulsory registration of all births, marriages and deaths in Ireland began on January 1st, 1864. In addition, Registers of marriages, ‘except those celebrated by the Roman Catholic clergy’, are available from April 1st, 1845. To clarify this, note that they include all marriages celebrated in the Church of Ireland and Free Churches such as Presbyterian, Methodist, Baptist, etc. and also those that took place in Civil Registry Offices. It is often not realised that many marriages of Roman Catholics are therefore included in these registers of 1845 to 1863 period.

The earliest records held by the General Registry are those marriages celebrated in the German Protestant Church in Poolbeg Street, Dublin for the period 1806 to 1837, and as most of the names listed are of Irish families, it is worth while consulting the Indexes.

All of the Civil Birth, Marriage and Death Registers are alphabetically indexed up to 1987 and are easy to follow. The Birth Registers give names of child and parents (including mother’s maiden name); date and place of birth; residence; and father’s occupation.

The marriage registers give occupations of the parties to the marriage; place(s) of residence; both fathers‘ names and their occupations, and sometimes, also, the ages of both bride and groom.

Death Registers give only date and place of death; age (double-check for accuracy as quite often incorrect); whether married, widowed or simple prior to decease.

Whether searching the Indexes fora particular person, or compiling a list of all Births, Marriages and Deaths for any one surname, all possible variations of the name should be checked. With experience, it will amaze one to realize the wide variety that exists for almost all surnames. So if you have difficulty in locating, for instance, a Byrne birth, it may be listed under any one of O’Byrne, Beirne, Burn, Burns, Bourne, Birne, etc.

It is necessary to add that, while compulsory registration was introduced in 1864, there were omissions, particularly in the early post 1864 period, for both births and deaths usually. In which case, your next step is to try Parish Church Registers for that elusive ancestor.

Listed on page 31 are the surviving Church Registers of County Wicklow and their earliest dates of entries. It should be noted that your missing Roman Catholic or Methodist ancestor may be listed in the Church of Ireland Registers. One example of this is in Donaghmore (Co. Wicklow) C. of I. Register of Baptism ‘1 826, May 21 , SHANE, Andrew, son of Andrew and Esther (R.C.), Randlestown’

Although many of the early Roman Catholic Registers are in Latin, they give more useful genealogical information than their C. of I. counterparts, in that they also tend to list the maiden surname of the mother of the baptised child. For instance in Clonmore (Ballyconnell) R.C. Register on Sept. 7, 1834 ‘Fanny, of Pat Connor & Betty Abram of Kilquiggin. Sponsors: James Sheane and Ann Sharp‘.

Wills are a most useful source of both family and social history and not only do they provide a list of family members and their relationship to the deceased but usually, also, precise details of property.

Along with original wills, the National Archives (P.R.O.I.) hold abstracts of some wills which were destroyed in the Civil War vandalism of the Four Courts and Public Record Office in 1922. These are arranged by Card Index in the Public Search Room.

Some indexes of wills, arranged by dioceses, survived the 1922 destruction and can also in certain cases be of great benefit.

From 1858 onwards, there were published annual calendars of wills and administrations arranged alphabetically. They contain much useful information such as name and address and occupation of deceased; date and place of death plus name and address of person(s) to whom probate was granted, value of estate and date of probate, etc.

The earliest complete national census records of genealogical value that survive, are those recorded for the years 1901 and 1911. They are held by the National Archives (P.R.O.I.) and it is merely necessary to know the place of residence of the family at that period. Despite being of rather recent vintage, they can be quite a treasure trove.

The 1901 returns give name, age, religion, occupation; ability or otherwise to read and write; marital status; relationship to householder; place of birth and ability, or otherwise, to speak English and/or Irish. As ages given are not always precise, it is wise to check this against age given in 1911 census. Finding an 80 year old listed in the 1901 census can take one’s research back to 1821, and is equally useful in locating place of birth, if other than the county of residence.

Details of houses are also given in the census returns and these can help to build up the social history of the family.

The 1911 Census, in addition to that of 1901, gives the duration of a marriage (which can be a great help if year of marriage is not known) and also the number of children born, and number still living at that time. This is the latest census available for inspection by the public.

Almost as useful as a census return are the Primary Valuation Records, commonly known as Griffith’s Valuation, which for Wicklow County were published in 1852-1854. They are listed by Barony, Poor Law Union, Civil Parish and Townland and name every householder and occupier of land, along with details of their holding, whether land and/or house and their valuation.

The complete work is indexed, by County as an “Index of Surnames”, together with names listed in the Tithe Records of 1823 to 1838 period.

The Tithe Applotment books are arranged by diocese, parish and townland and list all those who held land and their acreage in each townland.

The County Indexes of surnames are also useful in charting the county and nationwide distribution of surnames.

The Registry of Deeds

The Registry of Deeds is located in the King’s Inns, Henrietta Street, Dublin and holds the records of land transactions from 1708 onwards. These records are alphabetically indexed as follows:

(a) Grantor’s (i.e. the person who sold or leased the property) Index.

(b) Lands Index, arranged by County and Townland.

An example of entries in the Grantor’s Index:

There is, unfortunately, no Grantees‘ (persons purchasing or leasing property) Index.

Apart from property transactions there are deeds of marriage settlements and wills.

Abstracts of deeds of genealogical value are :

Vol. 16 – 141-7124; Registered 23 January 1715; Deed of Settlement on the marriage of Thomas Chamney, son of John Chamney, of Shellelah Forge, in the County of Wicklow, with Margaret Graves. William Graves, son of Francis Graves, of Drogheda, Edward Chamney, brother of said Thomas Chamney and Revd. Edmond Newton, of Carnew appointed Trustees. Recites that her fortune was £1,000, and that in consideration of said marriage the said John Chamney agrees to settle the lands of Ballyshanogue and Ballyshorke in County Wexford, and Kildavin and Ballypierce in Co. Carlow.

Irish Directories as a source of family history are quite excellent. The National Library has a very comprehensive holding and that of the National Archives is also extensive.

Co. Wicklow towns may be found in the following:

The “King’s Inns Admission Papers, 1607-1867” (Published by the Irish Manuscripts Commission) are a useful source for researching members of the Legal Profession. An entry from this publication illustrates this:

For those who wish to pursue this absorbing hobby, membership of any of the following Societies can be recommended.

The following publications are suggested for further reading :

“Surnames of Ireland” by Edward MacLysaght.

“Tracing the Past” by William Nolan.

“The People of Ireland” (BBC Publications).

A final word of advice is to transcribe your research material exactly as you find it and not the way you think it should be. Also note the location of all data.

There is a shop specialising in genealogical publications at Suffolk Street, Dublin and it is worth a visit.

Wicklow Heritage Project, the Courthouse, Market Square, Wicklow. (This will later be housed in the proposed new Heritage Centre in the refurbished Old Jail Complex adjacent).