You are here: HomenextPlacesnextDUNLAVINnext01. Dean Jonathan Swift of St. Patrick’s Cathedral – and Dunlavin. 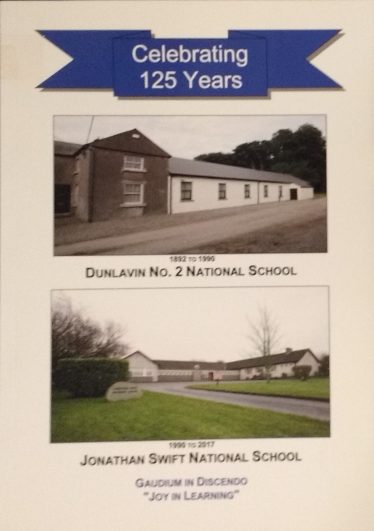 Swift was born on 30 November 1667 in Dublin. He attended Kilkenny Grammar School and later graduated from Trinity College in 1686.[1]  He went to England in 1688 and became secretary to Sir William Temple at Moor Park in Surrey. It was here that he met Esther Johnson, the ‘Stella’ of his famous Letters to Stella series.[2] They had an enigmatic relationship, and it is suspected that they married secretly in 1716.[3]

In 1692 Temple’s support enabled Swift to receive an MA from Oxford, but on the death of his patron in 1699 Swift returned to Ireland. He was offered several posts in the Church of Ireland and in 1700 was instituted as Vicar of Laracor (Co. Meath) and was presented to the prebend of Dunlavin.[4] This basically meant that Swift was an honorary canon of Dunlavin and was entitled to draw money from the tithes of the parish. [5] As prebendary of Dunlavin, Swift was also entitled to occupy a stall in St. Patrick’s Cathedral.[6]

Dr. Louis A. Landa has pointed out that ‘Swift’s appointment to the prebend of Dunlavin in St. Patrick’s Cathedral was the most significant single event in his early clerical career. It was the beginning of his forty-five-year long association with that cathedral’. Landa also suggests that Swift ‘had no obligation to the parish of Dunlavin, whence the name of his stall.[7] This small parish endowed the prebend with tithes – though not very munificently, since Swift’s annual return was only a few pounds’. Prof. Ricardo Quintana has added that Swift’s appointment to Dunlavin ended ‘a period of considerable uncertainty’ in his life as the extra income (meagre though it was – the account book for 1708 set the tithes for Dunlavin at just £14.8s.0d) meant that Swift could continue to write.[8]

Swift had begun his first great work while he was at Moor Park, but it was finished and published during his Dunlavin tenure. A Tale of a Tub appeared in 1704 and established Swift’s reputation as a satirist. The book contained three parts. The Tale itself attacked the corruption that existed in religion; The Battle of the Books was a mock-heroic attack on the world of learning and Discourse concerning the Mechanical Operation of the Spirit ridiculed the preaching and worship of the time.

In 1708 Swift published his Bickerstaff Papers, but it was in 1710 that he began writing the letters, which would be eventually published as the Journal to Stella and which would put him on a par with Alexander Pope as one of the greatest satirists of the age. [9] He still held the prebend of Dunlavin at this time, but his reputation meant that he was travelling constantly between Ireland and England, where he was involved in the highest political circles.[10]

Swift’s masterpiece, Gulliver’s Travels, was published in 1726. He said that he intended it ‘to vex the world rather than divert it’[12] and the book is indeed unsurpassed as a biting satire. His best-known later work was A Modest Proposal, a criticism of the Tories’ attitude to the Irish question at the time.[13] In the late 1730s Swift, who had long suffered from Meniere’s disease (a disorder of the inner ear) slipped into senility and he died on 19 October 1745.[14] Today the Church of Ireland primary school in Dunlavin bears his name, reflecting the village’s association with the literary giant.[15]