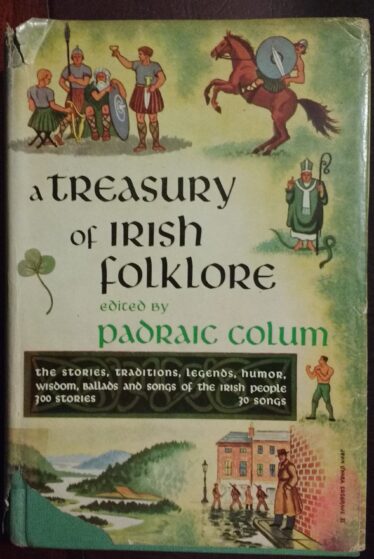 Diversion 4. As a follow-up to the previous  fairy story, this reworked short excerpt from my book ‘An Irish village: Dunlavin, County Wicklow’ seeks to place the story in context by examining the folk and fairy beliefs and superstitions in the Dunlavin area during the nineteenth century. Enjoy!

Oral tradition versus the printed word

In nineteenth-century Dunlavin popular beliefs, traditions and culture survived side by side with the more formal devotional practice of Catholicism promoted by the Church of the majority of the population.[1] It has been observed that ‘a plurality of ideologies can always be accommodated within a single lifestyle’.[2] In nineteenth-century Ireland:

Just out of sight of the solid new Catholic chapels, with their paved yards and stout iron railings, and underneath the orderly grid of print which Victorian officials and administrators were conscientiously laying over every corner of the island, another world continued to exist, whose ways of thinking were based on oral tradition, not on the printed word.[3]

This was the world of fairy legend, and belief in fairies persisted in the Dunlavin region throughout the nineteenth century. Fairies inhabited an ‘otherworld’, and contact between this and the real world formed the basis of many fairy legends.[4] Fairies, it was believed, existed under the earth, in air and in water and lived parallel lives to humans. They could steal children away, leaving changelings in their place; they could bring disease on crops, animals, farm produce (such as milk and butter) and humans – but they could also reward kindness.[5] Fairies were strongly identified with place, and hills and ancient earthen mounds where they abided were perceived as places of sanctity.[6] Two such places adjacent to Dunlavin were Gormanstown hill and Tournant moat, and both feature in a local fairy legend concerning the ford over the River Griese on the Logatrina road, to which some ‘persons now living’ attested in 1863 (see previous post). Ironically, knowledge of these legends and beliefs in Dunlavin comes principally from the pen of a post-Famine agent of the devotional revolution, Fr. John Francis Shearman.

The fairy narrative is revealing of the nature of folk beliefs in nineteenth-century Dunlavin. Many high-altitude sites were believed to be fairy forts or fairy raths, and the association of fairies with hills and ancient mounds places beliefs in Dunlavin in line with those of other parts of Ireland.[7] The failure of cows to give milk, the principal source of income for many agricultural families, and a commodity also associated with female fertility and child-bearing, was another common theme of fairy legends in many parts of Ireland.[8] However, the most significant part of Shearman’s account concerns the consultation of a fairyman. Nineteenth-century antiquaries noted the existence of ‘fairy doctors’, whom country people consulted for the relief of illness and injury in humans and animals.[9] The existence of such a figure in Dunlavin suggests that belief in fairy forces was strong within elements of the local community, rivalling the ever-growing power of the priests. Shearman hardly preached about fairies, but the people believed in them! Despite the devotional revolution and the omniscient presence of the church and its clergy, the gap between the official beliefs and the actual beliefs of many local people ensured that folk-belief flourished in Dunlavin in the 1860s.

Belief in fairy legend also extended to topographical features. Fairy raths, fairy stones and fairy trees abounded in the fields around Dunlavin.[10] Certain places were avoided because of their association with malevolent fairies. Local people avoided ‘Byrne’s Hollow’ in the townland of Cowpasture because it ‘had a bad reputation for spirits after dark’.[11] While Byrne’s Hollow was associated with fairies, other spirits also figured prominently in the folk beliefs of many nineteenth-century Dunlaviners. Ghosts formed an almost tangible part of these beliefs. They too rendered certain landscape features and localities areas of high risk. In Dunlavin Upper, a site known as the Red Bush was feared, as it was the location of intermittent supernatural apparitions of an old woman, a hen and a clutch of chickens. The ghost of a nun in a blue habit haunted a house in Stephen Street, and a coach with a headless coachman sometimes came into Dunlavin at the lower end of the same street, before vanishing. A black dog, with fiery eyes and large fangs appeared on dark nights at Milltown crossroads. A dead man reputedly appeared to his son on the Rathbawn road.[12] These hauntings and the superstitions associated with them were part of the everyday life of many Dunlavin people in the nineteenth century. Perhaps the most feared supernatural manifestation was the banshee. Literally meaning the ‘fairy woman’, this female spirit was a harbinger of death. Despite the oddity of this manifestation, people who saw it were ‘sane and normal’.[13] Described as a wizened old woman combing her hair, this spirit was witnessed by a number of people in and around Dunlavin in the second half of the nineteenth century.[14]

Banshees, fairies and ghosts vied with formal religion for the hearts and minds of many Catholics. At least one local story of the supernatural reflected this struggle and symbolised the increasing power of the Catholic Church over both superstition and its rival Church in Dunlavin. According to this tale, a farming family from Crehelp held a party, and a Catholic priest was invited to the mainly Protestant gathering. The priest blessed and cut the roast that was served, and a piece of fat was given to the family cat. The cat spat on it, before bursting into a ball of fire and disappearing up the chimney. The event convinced the whole family to convert to Catholicism.[15] In addition to the element of supernatural belief, this tale reinforced the power of the Catholic Church. Evidently, this was one case where folklore could enhance the reputation of Catholicism, and, as traditional superstitious beliefs waned during the mid-to late-nineteenth century, formal Catholic devotion grew stronger in the Dunlavin region.

[1] Hyland’s successor as parish priest of Dunlavin, Canon James Whittle, may have had an ambiguous attitude to the practice of devotion at the holy well. He took over as parish priest in 1862 and penned an undated poem about the well in which he referred to ‘the healing waters’ power’ of the ‘sacred ground and well’. ‘Lines on St. Nicholas’s well, Tournant, Dunlavin’, Dunlavin Festival of Arts Brochure, (2005), p. 124. Whittle was a native of Dunlavin and grew up among people for whom its powers were very real, and for whom the pattern to the well was a major annual event. This may explain his attitude towards the well and its healing powers, and his benevolent tolerance towards devotion there may at least partly explain why the pattern survived during his tenure as parish priest between 1862 and 1884, in spite of the fact that such devotion had been abolished by Hyland many decades previously.
[2] Ashis Nandy, The intimate enemy: Loss and recovery of self under colonialism (Delhi, 1983), p. 82.
[3] Angela Bourke, The burning of Bridget Cleary (London, 1999), p. 24.
[4] Alan Bruford, ‘Gaelic folk-tales and medieval romances’, Bealoideas, the journal of the Folklore of Ireland Society, xxiv (Dublin, 1966), pp 8-9.
[5] Bourke, The burning of Bridget Cleary, pp 27-8 and 146.
[6] Padraic Colum (ed), A treasury of Irish folklore (New York, 1954), p. xi. Also Sean Ó Suillebahain, Irish folk custom and belief (Dublin, undated), p. 85.
[7] See for example F. H. A. Aalen, Kevin Whelan and Matthew Stout (eds), Atlas of the Irish rural landscape (Cork, 1997), pp 44-9 and 250-3; Matthew Stout, The Irish ringfort (Dublin, 1997), passim and Frank Mitchell and Michael Ryan, Reading the Irish landscape (Dublin, 1997), pp 254-61.
[8] In addition to milk, malevolent fairy forces also extended to other aspects of dairy produce such as cheese and, most notably, butter. See for example Richard P. Jenkins, ‘Witches and fairies: supernatural aggression and deviance among the Irish peasantry’, Ulster folklife, xxiii (Belfast, 1977), pp 33-56; Eilís Ní Dhuibhne, ‘The old woman as hare: structure and meaning in an Irish legend’ Folklore, 104, i and ii (Dublin, 1993), pp 77-85 and Kevin Danaher, The year in Ireland (Cork, 1972), pp 109-19.
[9] Bourke, The burning of Bridget Cleary, p. 31.
[10] Oral tradition. The author encountered this tradition during his childhood. Fairy raths were circular elevations or depressions, usually marking out old ringfort sites. Fairy stones were normally large rocks that had reached the surface of the boulder clay soils. Fairy trees, usually hawthorns, were single trees in fields and were given a wide berth by farmers, who sowed around them rather than cut them down. One field in Dunlavin Upper had a fairy rath, stone and tree all within its boundaries.
[11] Cowpasture (N.U.I. Maynooth, Shearman papers, vii, f. 9). Such depressions in the landscape were associated with fairy raths.
[12] The old woman and poultry may relate to an eviction on the site; the nun supposedly met a violent end and the black dog was allegedly a manifestation of the devil. The dead father walked with his son and a companion for part of their journey, carrying an axe on his shoulder, before disappearing. Gerard O’Dwyer, ‘Do you believe? Strange tales from our locality’, Dunlavin Festival of Arts Brochure (2002), pp 14-6.
[13] Arantxa Gonzalez, ‘The persistence of Celtic customs and rituals’ (BA thesis, U.T.M., Toulouse-le-Mirail, 2001), p. 72.
[14] Visitations by the banshee continued to be reported in Dunlavin until well into the twentieth century. O’Dwyer, ‘Do you believe? Strange tales from our locality’, p. 15. This local description and account of the occasion of the banshee’s manifestation agrees with folk beliefs throughout Ireland. See for example Colum (ed), A treasury of Irish folklore, pp 396-7; Ó Suillebahain, Irish folk custom and belief, p. 48 and Sheila St. Clair, Folklore of the Ulster people (Cork, 1971), pp 17-26.
[15] Transcript of an interview with an elderly female resident of Dunlavin conducted for the Dunlavin Action Group’s teamwork project, 1988. The lady heard the story from her grandmother, who would have been born in the early to mid-nineteenth century. Published in O’Dwyer, ‘Do you believe? Strange tales from our locality’, pp 15-6.