You are here: HomenextPlacesnextDUNLAVINnext13. Popular panic in 1832: a strange constabulary report emanates from Dunlavin!

13. Popular panic in 1832: a strange constabulary report emanates from Dunlavin! 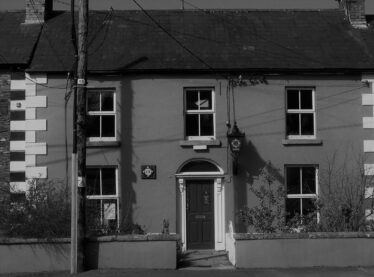 Diversion 13. Today’s diversion is a short piece I put together today. I was looking through some sources I’ve collected over the years – many of which I’ve never actually included in my published works. I came across a few references from the Outrage Papers for County Wicklow in 1832. That was a strange summer… enjoy reading a little about the Great Panic’s impact on Dunlavin! Today’s picture shows Dunlavin’s former RIC station (now the Garda station).

A summer of discontent

Much of Ireland was in turmoil in the summer of 1832. To economic distress, the Tithe War, agrarian violence and an upsurge in murders was added a deadly new threat – an outbreak of cholera. The disease surfaced in Belfast in March and spread rapidly. The result of all of these factors was a summer of discontent. Fear, rumour and a sense of the wrath of God were evident among large swathes of the population. This was especially so, according to many contemporary observers, in the case of the Catholic lower classes. Strange apparitions, including appearances of the Virgin Mary, were reported from Cork, Queen’s and King’s counties (Laois and Offaly), Westmeath, Roscommon and Kilkenny. The apparitions advised people to put ‘blessed turf’ – ash from their chimneys that had been anointed [blessed] by priests – in their houses to avoid the cholera epidemic. In many places turf, clay or straw was substituted for ash, as ‘Chinese whispers’-style changes were made to the rapidly-spreading supernatural message. The bearers of the messages were often travelling strangers, who usually claimed to be acting on the instructions of the Catholic clergy, who (unsurprisingly) denied all knowledge of the messages and of their bearers! The message and the use of the blessed turf was often accompanied by tales of disaster elsewhere, causing mass hysteria among its audience. Thus, for example, anxious people in Newtownmountkennedy heard that cholera was rampant on the western side of the Wicklow Mountains, and that it had killed two hundred people in Hollywood alone.[1] On Tuesday 12 June the message  reached Ballymore Eustace, where Constable B. McCann reported: ‘the greatest confusion appeared among the people in consequence of people running through the town carrying seven pieces of turf, and at each house they left a piece with directions to burn the bit of turf at their door and to say some prayers’.[2] The following day, Dunlavin was also thrown into turmoil, as the message reached the populace. Chief Constable J. H. Hatton reported widespread panic and hysteria in the village because ‘in consequence of a curse pronounced by Doctor Doyle a ball of fire had fell [sic] down from heaven in the Queen’s County and had completely destroyed it. They also stated that two angels had descended to whom they were ordered to offer up seven prayers’.[3]

A ‘flash in the pan’

The message soon stretched the length and breadth of Ireland, but the great panic of 1832 was short-lived. It was over almost as soon as it started – only a ‘flash in the pan’, one might say. Viewed from the perspective of our modern world, the phenomenon is difficult to understand. However, we need to try to understand the mindsets of ordinary people in the 1830s. There is little doubt that uneducated lower-class Catholics in particular were superstitious, but at a deeper spiritual level they also believed wholeheartedly and unquestioningly in Divine guidance and supernatural interventions in their existence. Divine Providence could, they believed, deliver them from evil, and could keep them safe in times of crisis. (Indeed, who are we to say that they were wrong?). At a deeper temporal level on the other hand, such beliefs probably reflected the everyday hopes and fears which played a real and significant part in their lives. These lower-class Catholics were on the bottom rung of the social ladder. For generations, they and their forebears had been persecuted and had suffered the impact of the Penal Laws. The enactment of Catholic emancipation was too recent to undo decades of hardship, oppression, failed rebellion, injustice and the denial of education and other rights and liberties that we take for granted nowadays. Once again, only Divine Providence could be invoked to improve their daily lot. This harsh background of protracted struggle meant that the mindsets of these people differed radically from mindsets today. If the great panic of 1832, and the report of Doctor Doyle’s curse, the destruction of Queen’s County and the appearance of two angels in Dunlavin teaches us anything, it is perhaps how little we really understand of the mindsets of our nineteenth-century ancestors, and the mental worlds of these ordinary people and, consequently, of the wider society at that time in which they lived.