You are here: HomenextPlacesnextDUNLAVINnext5. Religion & Identity in Medieval Ireland 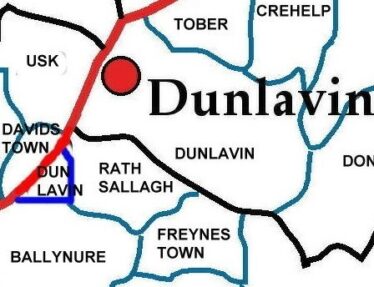 Diversion 5. Today’s diversion is a new essay, which I wrote last year. It is, as yet, unpublished anywhere else. It is not actually centred on the Dunlavin region, but it merits inclusion here because one of the case studies focuses on an event in Freynestown, which lies close to Dunlavin village. The modern pronunciation of the name is Fryanstown. This place name survived the Middle Ages and was recorded in the nineteenth century as the name of a civil parish (see map). I hope readers will enjoy it.

Faith and its effects on people in Medieval Ireland

Divided by a common religion: ecclesiastical identity and the creation of a ‘savage Other’. Three brief case studies from medieval Dublin and Wicklow.

Czech novelist, Ivan Klima, has maintained that our ‘genius loci’ – the spirit of place embodied by our attachment to that place and affection for its people – is possibly ‘more influenced by the shape of the mountains that surround our birthplace, or the height of the heavens above them… or the meandering of the local river’ than by what he refers to as the ‘more artificial reasons of race, faith or ideas’.[1] However, race, faith and ideas also influence people, and may cause cleavage between groups who perceive each other as ‘different’ due to one or more of these factors. In concentrating on religion, this essay will focus on the effect of faith on people in Medieval Ireland by briefly examining specific events pertaining to Dublin and Wicklow.

Hiberno-Norse perceived the native Irish as a ‘savage Other

Following the Patrician (and Palladian)[2] conversion of Ireland in the fifth century, Christianity flourished. While practices were sometimes at variance with Rome, early Christian Ireland was recognisably part of Medieval Christendom. Ethnically, pre-Norse Ireland was more or less homogenous, as was its religion, despite various monastic wars and other ecclesiastical conflicts during the period. The first major ethnic upheaval since the coming of the Celts was the arrival of the Norse, which began in the late eighth century.[3] Though the Hiberno-Norse were converted to Christianity in the centuries which followed, their capital, Dublin which celebrated its (dubious) millennium in 1988,[4] remained a separate entity and part of a Norse polity which spanned the Irish Sea. The Hiberno-Norse chose bishops whose links were closer to the British than the Irish Church and, significantly, Dublin had no parish church dedicated to a native Irish saint, though there was no shortage of potential candidates for such an honour.[5] However, despite geographical proximity, the Hiberno-Norse perceived the native Irish as a ‘savage Other’,[6] always to be viewed with suspicion and wholly unworthy of providing eponyms for Dublin’s churches. In this case, the native Irish and the Hiberno-Norse were actually divided by a common religion, as both ecclesiastical appointments and religious practices were utilised to highlight differences rather than similarities between the two groups.

Divided by a common religion

Following the arrival of the Normans in the twelfth century, one might imagine that Christianity would act as a unifying force between the Gaedhil and the Gaill. However, this was not to be the case – once again, they would be divided by a common religion. One of the reasons, ostensibly, for the Norman invasion of Ireland was to reform the Irish Church. Much ink has been used regarding the papal bull Laudabiliter which purports to be a letter from Pope Adrian IV to Henry II, written in 1155, giving approval for the king’s plan to invade Ireland. Gerald of Wales (Giraldus Cambrensis) included Laudabiliter as one of his five justifications for the invasion of Ireland.[7] Gerald maintained that Pope Adrian viewed the Norman invasion as ‘enlarging the boundaries of the Church, checking the descent into wickedness, correcting morals and implanting virtues’.[8] However, both the authenticity of the bull, and the motives of Gerald, who certainly portrayed the native Irish as a ‘savage Other’ lacking in even the most basic understanding of Christianity and its teachings, have been questioned.[9] Whether or not the bull was genuine, and whether or not the native Irish were as ignorant of basic Christianity as Gerald claimed, did little to alter the course of events in Ireland. Reformers such as Celcius and Malachy of Armagh were slowly changing the Irish institution from within, but despite the arrival of Cistercian monks at Mellifont in 1142 (and in west Wicklow at Baltinglass in 1148),[10] the Irish Church remained less organised than its continental counterpart. When the Normans arrived, they restructured the Irish church, but many Irish chieftains did not respect the new Norman Church. Gerald of Wales may have perceived the native Irish Church as a ‘savage Other’, but it is also true that the native Irish clans viewed the Church of the newcomers as a ‘savage Other’, unlike the Church of the Gaedhil and unworthy of respect or allegiance. In the west Wicklow region, the ‘Normanised’ Baltinglass abbey became a prime target for the marauding Irish.[11] This situation gave rise to the problem of Ecclesia inter Hibernos, or the ‘Church among the Irish’,[12] which led to the development of a two-tier Church administration system. In Wicklow, for example, theoretically the amalgamation of the dioceses of Glendalough and Dublin had been accomplished in 1185, but the see of Glendalough remained under the control of the O’Byrnes until the sixteenth century, nullifying the ecclesiastical union in practice.[13]

Native Irish clerics were prohibited from advancement in the Anglo-Norman Church, and open hostility often erupted between the Churches of the two ‘nations’. In the 1330s, the Irish of Leinster were accused of burning some 340 churches.[14] One of these was at Freynestown (also known as Fryanstown or Frianstown), a townland close to the village of Dunlavin in west Wicklow. The most horrific aspect of the arson attack at Freynestown, though, is that at the time the church contained eighty men and women, who had fled there to seek sanctuary. Norman records state ‘when a certain chaplain of the said church, clothed in sacred vestments wished to leave the building with the body of the Lord, they drove him back with their lances and burned him with the others’.  Evidently, in the eyes of the Gaedhil, respect for the cloth did not extend to Norman clergy! The incident at Freynestown prompted the excommunication of ‘Otothel (O’Toole) and his accomplices, enemies and rebels of the King’.[15] Far from being a unifying force, Christianity, and particularly Church administration, actually deepened the divisions between the Gaedhil and the Gaill. In the 1350s Archbishop Richard FitzRalph commented that the constant hatred between the two nations meant that ‘large numbers died without grace or charity’.[16] While it is true that within the Church, ‘racial mixture did not necessarily mean racial conflict’,[17] the evidence suggests that such conflict was widespread. Certainly the advent of the Anglo-Normans produced divisions and antagonisms within the Church on the island of Ireland that persisted throughout the Middle Ages.[18] The evidence also suggests that native Irish clans, such as the O’Byrnes of Wicklow, were ready to defend their Ecclesia inter Hibernos, and quick to take up arms against the threat of the Ecclesia inter Anglicos of incomers.[19]

There were also rare cases where native Irish clansmen rejected the Churches of both nations, possibly because the Norman clergy actively supported their subjugation and Irish clergy seemed powerless to stop them. The religious allegiance of centuries was being undermined and the Gaedhil were not protected by their Church as the power and influence of Ecclesia inter Hibernos was overshadowed by the progressive advances made by Ecclesia inter Anglicos of the Gaill. Moreover, the hierarchy lent support to the Norman incursion and initially acknowledged the English king as overlord.[20] Within a century or so of the arrival of the Normans, Gaelic society was becoming marginalised, disenfranchised and frustrated, and the failure of its Church to act as protector prompted at least one member of the O’Toole clan to reject Christianity and its teachings out of hand. County Wicklow native Adam Dubh O’Toole, whose clan was in intermittent conflict with the Archbishop of Dublin from 1295 onwards, was eventually captured in 1328. His notoriety was such that his case was brought before an ecclesiastical court for trial.[21] Adam Dubh rejected the authority of the papacy, even though the then incumbent Pope John XXII, had some sympathies with the position of the Gaelic clans.[22] Moreover, Adam Dubh denied the incarnation of Christ, rejected the Trinity and referred to the Virgin Mary as a ‘harlot’. The Churches of both nations, Gaelic and Norman, would certainly have regarded these views as those of a ‘savage Other’. O’Toole’s fate was sealed, and on 11 April 1328 Adam Dubh was burned at the stake.[23]

In conclusion, Ivan Klima’s observations regarding our genius loci seem to be, at best, only partly true. The evidence from the brief studies outlined in this essay suggests that faith was interlinked with the genius loci of the inhabitants of Medieval Dublin and Wicklow. The Hiberno-Norse identified with the urban settlement of Dublin, but they also identified with Dublin’s exclusively Hiberno-Norse Church, whose buildings (unlike contemporary Gaelic Irish churches) had no place for eponymous Irish saints from a ‘savage Other’ Church. Similarly, in later centuries, the Gaedhil identified with Ecclesia inter Hibernos, and the Gaill with Ecclesia inter Anglicos, each of which viewed its rival as a ‘savage Other’. Of course, heretical beliefs were not tolerated at all and individuals who rejected Christianity were certainly treated as the ‘savage Other’! In the Medieval Irish context, religion was often intertwined with specific racial groups, strengthening its place as a badge of identity. The situation would evolve and become even more complex with the advent of the Reformation in the Early Modern period.