You are here: HomenextPlacesnextGLENMALUREnextEXPLORING THE MINING HERITAGE OF COUNTY WICKLOW

The Ballinafunshogue Mine, also referred to as Ballinafinchogue, Ballynafinshogue, may have opened as early as 1797, though other sources suggest a slightly later date of about 1800. At that time, it was the only operational mine in Co. Wicklow. Whichever is correct, both dates suggest that the mine opened, or was operating during the period of the 1798 rebellion. This is, in itself, quite remarkable, as Glenmalure was one of the last places in which the rebellion was eventually suppressed. Various other records document intermittent production between 1811 and 1900.

A plan by Thomas Weaver, dated 1812, shows the substantial extent of underground workings which had been developed by that date. This included various shafts and adits as well as various levels inside the mine, to a depth of about 510 feet (153m). By 1853, the geologist Warrington Smyth noted that the principal lead ore, the vein, had been proven over a total length of more than 3,000 feet (900m). Weaver was a prominent developer of the mines in Wickow. He was involved with the Associated Irish Mine Company in Avoca and was one of the first persons to develop the Glendasan lead mines.

Nothing is, so far, known about the people who worked in the mines, or where they lived, and very little about either the mine owners or management – a lack of knowledge all too common for many historic mines in Ireland. Reports from 1845 record that about 30 men were working at the mine in the early 1840s. It is reasonable to surmise that some at least of these people resided with their families in the immediate district, as the site of a school is shown immediately adjacent to the mine on an early Ordnance Survey map (Fig. GM2). 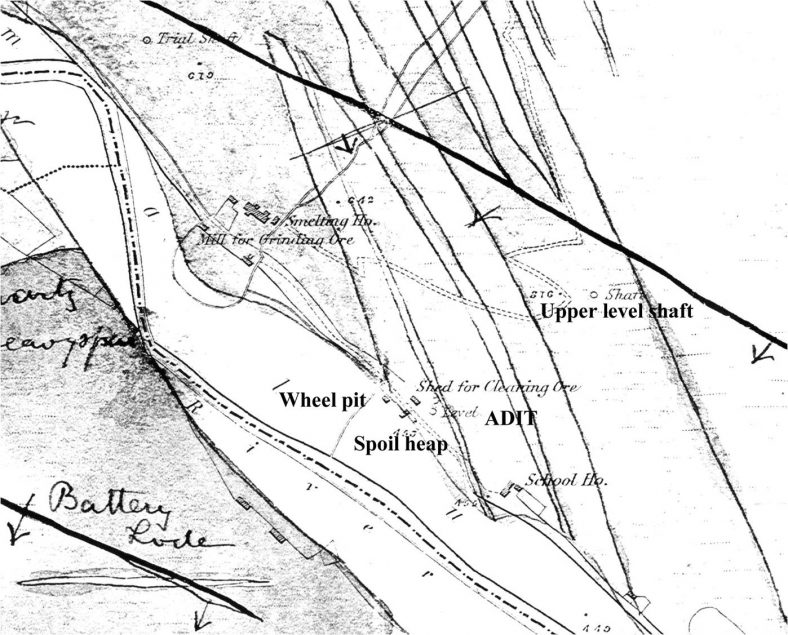 Fig. GM2 An enlargement of the 1865 Geological Survey of Ireland 6″: 1 mile field sheet, showing the principal features of the Ballinafunshoge Mine

Remains of 19th Century mine exploration activities are visible at various points along the length of the trail. The most conspicuous are off-white coloured spoil heap composed principally of fine quartz and rock debris. Infilled and overgrown shafts are also visible but none should be entered for safety reasons.

The extent of the spoil heaps still visible on either side of the road attest to the relatively substantive nature of this mining operation, which occurred nearly continuously from c. 1800-1900, at least. Much of this spoil has weathered and blended into the landscape, particularly on the steep slope on the northeast side of the road. Natural re-vegetation is obvious here, and, in places, in the far more extensive spoil heaps on the southwest side of the road, although seriously damaged and eroded by quad/motor bike scrambling activities (Fig. GM3) 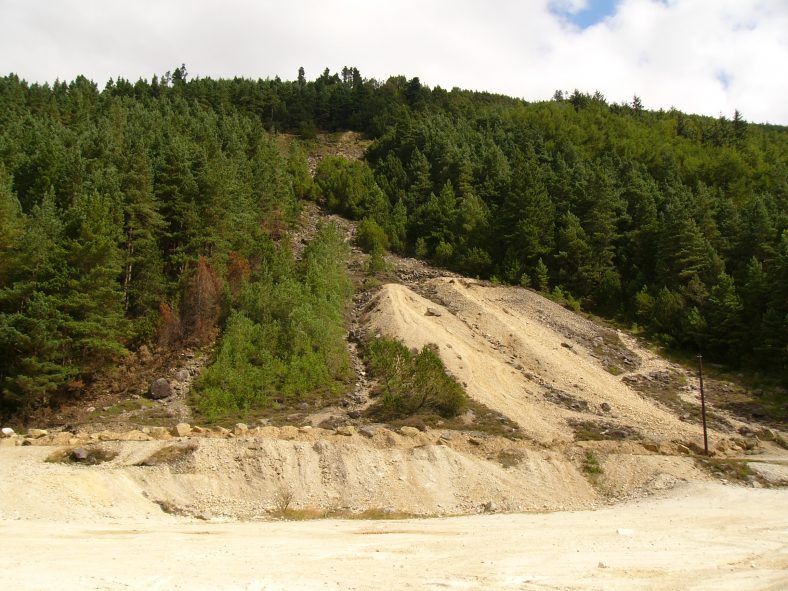 Fig. GM3 A general view of the Mine spoil/ scree covered hillside at Ballinafunshoge

Noteworthy historic features, which may still be discerned include:

1        The collapsed adit entrance with active drainage creating an ochre precipitate in the drainage channel either side of the road;

2        Remains of a c. 1.5m wide x 8m long, masonry construction water wheel pit. The function of the water wheel is unknown, though it may have operated some form of ore crushing machinery. (Fig. GM4). 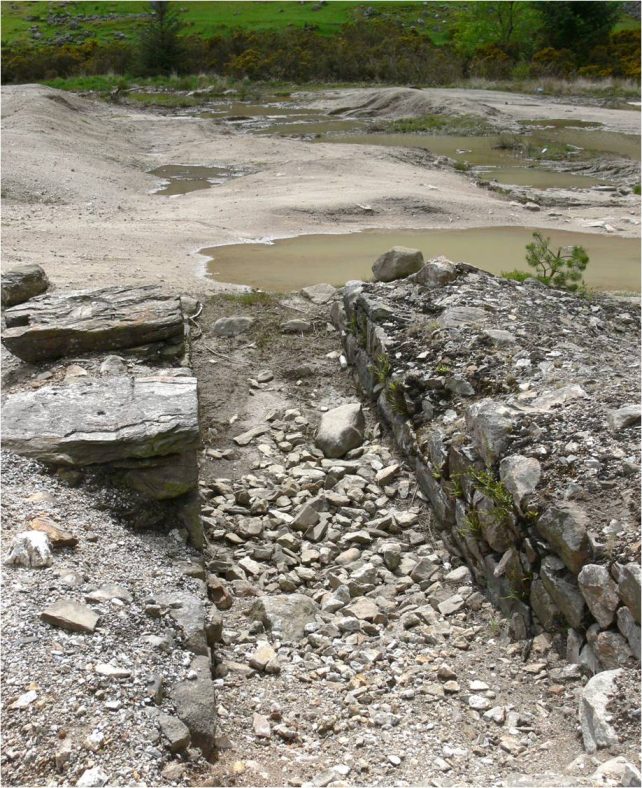 Fig. GM4 A close view of the remains of the “Wheel Pit”

There are two prominent building ruins opposite the spoil heaps, on the south side of the Avonbeg River. It is not clear if either or both buildings bore any relationship to the mine, though proximity to the mining works suggests a connection. Both buildings are constructed on a substantial masonry base, which forms part of a walled enclosure between them and the river. Very little now remains visible of the “School House” which was located south east of the mine site (Fig. GM2).

A map of the area, from around 1835, shows a smelter house and ore grinding mill located separately from and about 500m northwest of the ore extraction and processing site. There are now very few visible remains of this complex, the last remnants of which were apparently cleared as recently as about 10 years ago to make a car park and adjoining camping ground (Fig. GM5). What is believed to be at least part of the wall foundation footprint of the principal building at this site may just be discerned as a low masonry wall around parts of the car park, although there is now no obvious expression of either of the other two buildings which once existed at this site. 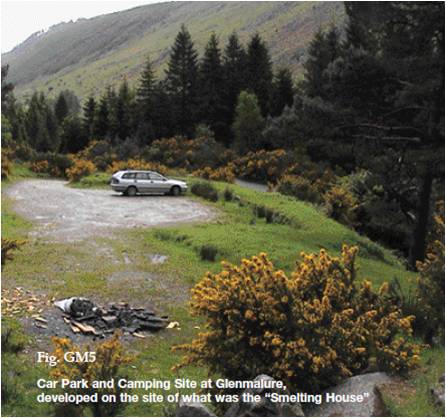 Immediately opposite this site, on the opposite side of the road, it is just about possible to discern the roughly rectangular, but heavily overgrown, outline of the ore grinding mill, and beside it a bare patch of soil in which pieces of smelting slag are still evident. Peat was apparently used as the fuel for smelting. Nearby, and partially overgrown by forestry, it is possible to discern the outline and part of the course of a leat (water channel) system, which loops around the site and back towards the stream, which flows under the road, just to the southeast of the car park.

A recorded output of 334 tons of lead is noted in 1811, when the metal was worth £30 per ton. Production in 1819 is given as 300 – 400 tons of ore, grading 68% lead. Later production figures, given in “Mineral Statistics”, include a period of virtually continuous production between 1845 and 1864. During that period, a maximum of 367 tons of lead ore was produced in 1845, and a maximum of 950 ounces of silver in 1852. The mine continues to be listed in the records for various intervals after 1864, either to note production aggregated with production from the Luganure mine in Glendasan, or to note that works had been suspended, which happened from1869 to 1873.

The Baravore Mines are situated at the top of the Glenmalure valley, just past the car park at the end of the road and across the ford. The Baravore Mine worked the northern extension of the Ballinafunshogue vein. There are remains of several mine tips and more importantly two crushing houses (Fig. GM6). The ‘old’ crushing house is located close the road near to the hostel whilst the new crusher house is about 100m from the road midway between the ford and the hostel. 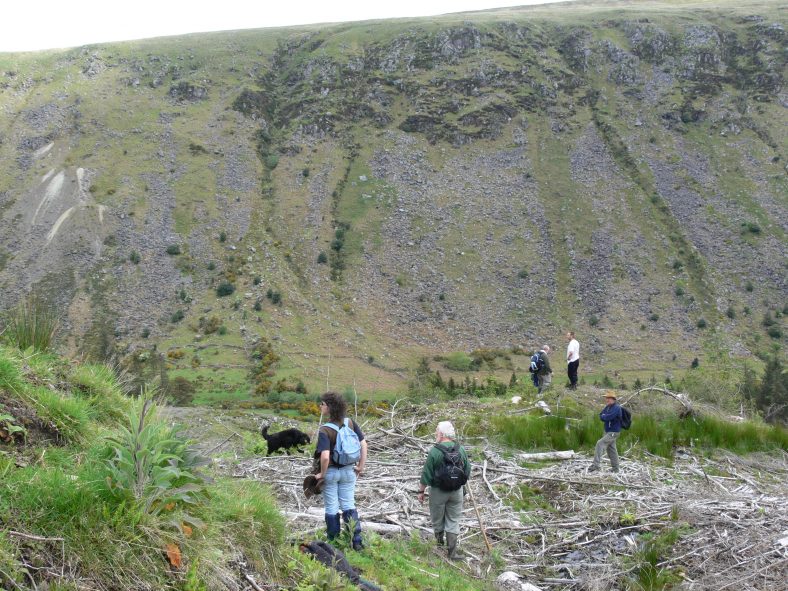 These mines appear to have been developed as trials in 1846 for lead, zinc and copper, but they were reported as abandoned in 1853. The ‘old’ crusher house may date from this period (Fig. GM7). In 1859, a prospectus was issued for the Baravore Silver-Lead mining company with a capital of £6,500 in £1 shares. Under the direction of Capt. Skimming, this new company, immediately erected new machinery; including waterwheels for working stamps and crushers. Despite the optimism of the promoters the Baravore Silver-Lead mining company appears to have not been successful and it was wound-up in early 1861. 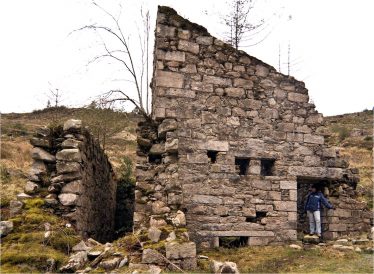 The ‘new’ crusher house (Fig. GM8), which may date from this period, is a substantial building. It is possible that the directors of the company spent most money on buildings and surface works so as to impress the shareholders in the size of the operation; rather than develop the mine properly underground. From 1865 until 1875 the mines were under the ownership of Henry Hodgson who was also working the Ballinafunshogue Mine. There are no production figures for the Baravore Mine from this period and the mine appears to have been abandoned shortly afterwards. 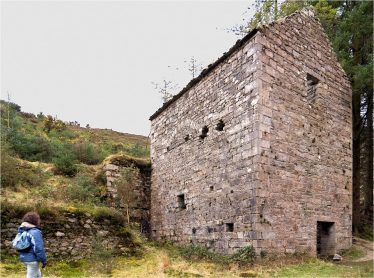