You are here: HomenextPlacesnextGLENMALUREnextGlenmalure, Fiac McHugh O'Byrne and Michael Dwyer

The ITA Topographical and General Survey of Wicklow (1942/3) from which this article is adapted is a valuable resource for Wicklow’s history both prior to, and during, the 1940s.  It is held by Wicklow County Council Library Service.

It is important for readers to be aware that the ITA survey was carried out primarily for tourism purposes and is not necessarily historically accurate.  The text as reproduced below is taken directly from the survey and contextual errors have been left in place. 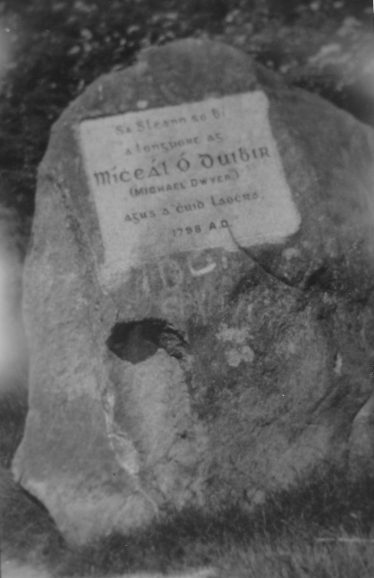 This wild glen which was the refuge of many Irish patriots in their struggle for freedom is famous chiefly for the exploits of “Fiac McHugh O’Byrne” and Michael Dwyer.  “Fiac”, the chieftain of the clan of the “O’Byrnes” of County Wicklow, took up arms against the English and, in the year 1580, inflicted a heavy defeat on an English army sent to capture him.  Tradition says that the forces met on top of the high hills in the north of the glen.  Fiac manoeuvred his troops in such a way that the English found themselves being driven down the slope.  They were eventually forced down into the river in the valley where they were completely routed with a loss of some 800-1000 men and with two of the British commanders being killed.

It may be of interest to point out that at this period every house in the glen was burned down.  The remains of one still stands, that of a man named Jim Kelly who had a woollen factory there.  The walls are incorporated into outhouses belonging to Mr Brian Farrell whose house is located at the bottom of the waterfall on the south bank of the river. 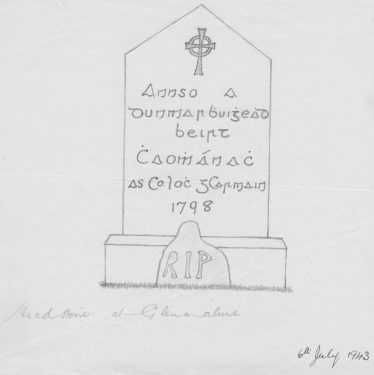 This parish (Aughrim) abounds with places of this type and nearly all have to do with the stirring days of 1798.  Naturally, Glenmalure takes pride of place as it was the stronghold of Michael Dwyer and his dauntless comrades.  On entering the glen we first see to our left a small headstone in a field.  This stone marks the place where two Wexfordmen were done to death.  Some say they were innocent victims, being men returning to their native County having been working in Dublin, and had no association with the “Rising”.  That, however, is unconfirmed.

As one advances a little further, one encounters the large “Commemoration” stone with inscriptions on either side recording the achievements of Fiac McHugh O’Byrne and Michael Dwyer.  Here, also, tradition says a man was “piked” to death and small indents in the stone are attributed to the point of the pikes.  This is, perhaps, rather an exaggeration. 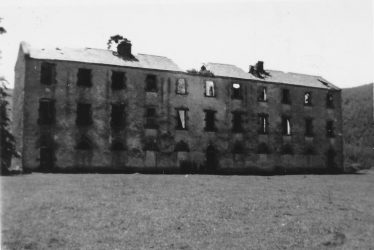 Drumgaff Barracks at the entrance to Glenmalure and the second barracks on the military road is worthy of note due to the fact that it was raided and burned by Michael Dwyer and his men.  It was subsequently rebuilt and re-garrisoned.

When hostility ceased it was evacuated and, since that time, it has fallen into decay.  In structure it is an exact replica of the house at Aughavanna. 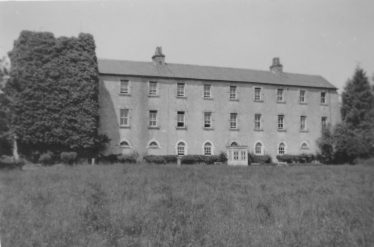 Aughavanna House is situated in a wild and desolate place, though beautiful in its wildness, at the foot of the mountains headed by Lugnaquilla, and deemed some six miles NW of the village of Aughrim.  The house was originally built as a barracks or block house in 1798 at the extremity of the military road which runs over and through the mountains as far as Glendalough.

Having served its purpose as a barracks, it was bought by Parnell and used as a shooting lodge.  Subsequently, it was bought by the Redmond family and became their residence until some years ago when, on the death of Capt. Redmond, they ceased to reside there.  It is a long, grey, stone building resembling a prison more than anything else.  The present occupants are “An Oige” who run it as a hostel for the use of the organisation.  This house has an exact counterpart at Drumgaff at the entrance to Glenmalure and connecting with this house by the military road.  These buildings were erected and garrisoned in an effort to subjugate the rebels headed by Michael Dwyer, the hero of ’98.  Tradition states that two informers named Twomey and Hempenstall were executed by “piking” at the entrance gate to Aughavanna House.