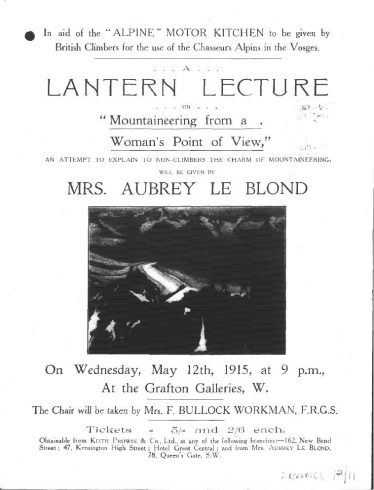 zoom
Notice of fundraising lecture given by Lizzie, 1915. 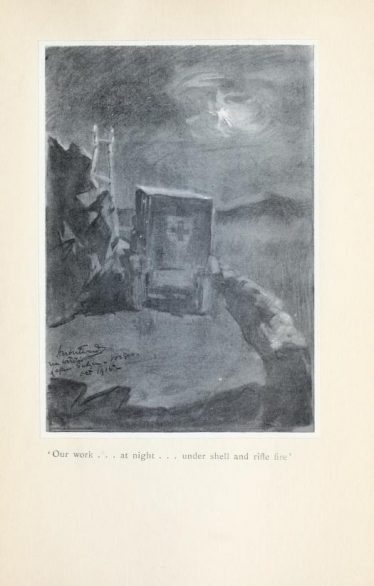 zoom
A BAC ambulance under fire.
Herbert Ward, Mr Poilu:notes and sketches with the fighting French (1916) 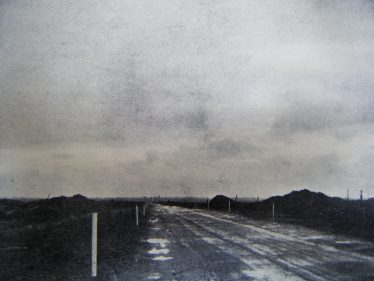 zoom
The Ypres Salient, looking towards the Menin Gate (photo taken by Lizzie in early 1919)
Mrs Aubrey Le Blond, Day in, Day out (1928) 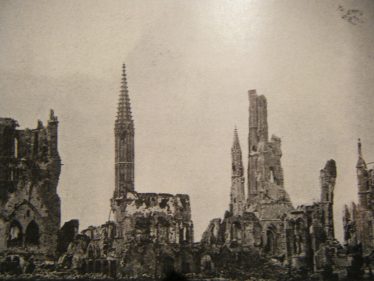 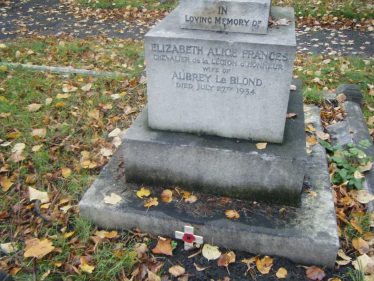 As Europe hurtled towards war in summer 1914, Elizabeth ‘Lizzie’ Le Blond was holidaying in a fashionable Swiss mountain resort. Born in Dublin in 1860 and brought up at Killincarrick House near Greystones, Lizzie had behind her a distinguished career as an alpinist, photographer and author.[1]  But any plans she may have had for a leisured retirement would soon be swept aside by the impetus of international events. On 1 August she left on the first stage of her journey back to England, and in Basle that evening, seated on a veranda overlooking the Rhine, her attention was caught by the distant sound of artillery – the first gunfire, she later believed, of the Great War. Two days later, in Paris, she learned that Britain and Germany were at war.

Back in London, Lizzie immediately sought to enrol in the war effort. Unable to find a post in a British hospital because of her age, and aware of a shortage of nursing staff in France, she made her way to Dieppe, where she was taken on by the first hospital to which she applied.  She remained there for nearly two years, carrying out the varied tasks of an orderly, which included bed-making, washing and feeding patients, administering medicine and sterilizing instruments. Unlike some of the ‘very starchy’ English nurses, she was able to establish an easy rapport with the wounded French poilus, sympathising with their dislike of regimentations, listening to their tales of army and home life, writing letters for them, organising concerts, reading to them and supplying them with books and papers.

While still working in Dieppe, Lizzie made use of her contacts in the climbing world to raise funds for a motor kitchen to be sent to the Chasseurs Alpins, an elite mountain infantry unit of the French army, currently fighting on the Vosges section of the Western Front. Many of the men had previously served as mountain guides, and the appeal attracted generous support from British and Irish climbers, while Lizzie herself raised a further £32 by the sale of tickets for her lecture, ‘Mountaineering from a woman’s point of view’. The motor kitchen, especially adapted for the rough terrain in which it would operate and capable of being converted, when required, to an ambulance, was displayed for a few days in London before being handed over to the British Ambulance Committee for service at the Front.

In late 1916 Lizzie returned to London to take charge of the BAC’s Appeal Department, responsible for raising £1,200 weekly to fund the provision of an ambulance service to the French military. This was achieved by donations from a range of sources and by a succession of ‘stunts’, which included a travelling display of a shell-damaged ambulance, and a week-long flower fair, held in Trafalgar, which raised more than £14,000.  Lizzie herself gave a number of illustrated lectures on the committee’s work.  In appealing for funds, she described the ‘coolness and courage’ of the volunteer crews, and the achievement of the service to date: in one eight-day period, she reported, a single convoy of twenty-five ambulances had transported 11,000 wounded, and a total of 400,000 men had been moved by BAC vehicles, ‘which went to the very edge of the battlefield’.

Following the Armistice in November 1918, Lizzie was engaged by the War Office to lecture to troops awaiting demobilization. The tour took her to various depots throughout the UK and in France during the winter of 1918-19. Conditions were difficult, with continuing food and fuel shortages, her talks were held in unheated    huts, and the equipment available was often unsatisfactory – one projector filling the hall with smoke and fumes before breaking down completely, while another burst into flames in the course of her talk. Attendance was compulsory, and Lizzie worried that her audience might be restive. But she won the young men’s goodwill by permitting them to smoke during her talk, and promising to hasten to her conclusion if they indicated, by shuffling their feet loudly, that they were bored!

When her lecture tour ended in France in early 1919, Lizzie seized the opportunity to extend her journey in order to visit some of the most notorious battlegrounds of the late war. Camera in hand, she made her way by slow stages to Ypres, which she found shattered and depopulated, its medieval heart a desolate expanse of rubble, its thirteenth-century Cloth Hall a ‘shapeless mass’. A couple of miles beyond the Menin Gate, the crossing point through which hundreds of thousands of troops had passed over the previous four years, she reached the village of Hooge, now nothing but a name. Further on, she came to an area which had not yet been cleared. Here, the ground ‘was churned to an incredible extent. Fragments of cloth, scraps of metal, ghastly remains, the nature of which one hardly dared to guess at, were pressed and rolled into what seemed a solid mass of congealed mud.’ Turning towards the village of Neuve Eglise, she found more ruins, its shattered church, ‘the blue sky showing through its slender arches … the only beautiful war ruin’ which she saw during her entire trip.

Later she would visit other places whose names had become bywords for destruction – Lens, ‘a rubbish heap … said to be the most completely obliterated of any French town’, Arras, a mass of broken masonry, its inhabitants sheltering in cellars from the devastation above ground, and Verdun, site of the longest battle in the war, resulting in nearly a million casualties. As her train approached Rheims, Lizzie searched the horizon for a first sight of its cathedral. Repeatedly shelled, the great church had taken almost three hundred hits, and had become a potent symbol of French suffering and endurance. Seeing it in reality, Lizzie was shocked by its ruinous state, ‘the beautiful glass … fallen from the windows, the roof … gone’, trees pushing up through the rubble of surrounding buildings.

For Lizzie, this tour was an ‘overwhelming’ experience, and would determine the future course of her life. ‘Not till one has stood beside those tortured trenches’, she reflected, ‘can one realize what flesh and blood, clothing an heroic spirit, has endured. And even then one cannot imagine more than a mere fraction of what it must have been when the hell of conflict was at its fiercest.’ Much of her time in the post-war years was devoted to the cause of Anglo-French understanding, and shortly before her death in 1934 her contribution was recognised by the award of the Cross of the Legion d’Honneur for her work in war and peace.

While commemorations of the Great War understandably focus on the men who fought and died in the conflict, it is worth recording too the crucial part played by civilian volunteers, including many thousands of women. Lizzie’s story is a reminder of the diversity and value of their contribution, and of women’s willingness to accept the challenges and hardships, as well as the opportunities, presented by war and its aftermath.

The principal source for this article is Mrs Aubrey Le Blond, Day in, day out (1928). Other sources include contemporary newspaper reports and Ladies’ Alpine Club Yearbooks, 1914-1920.