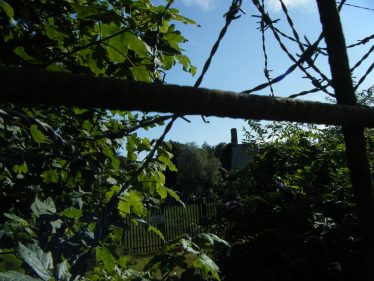 zoom
View of the Mill from the road

The earliest printed reference to Killincarrig mill is in the 1837 Lewis’ Topographical under the heading of ‘Killincarrig’. Killincarrig village, it was noted, had one hundred and sixty-eight inhabitants living in twenty-three houses. ‘Killincarrig House’ was the seat of Arthur Jones Esq., who ‘has an extensive mill here.’ Later the mill was known as Courtney’s Mill and it eventually passed into the Burnaby Estate. It subsequently belonged to Wicklow County Council and is now in private ownership.

Without access to the papers of the Jones Estate, we have no details of the workings of the mill, how many people were employed there, how much was produced, prices paid etc. In terms of size, it would have been a great deal smaller than, say, the large mills of Cork and Dublin or of the large towns such as Carlow, which in 1809 produced 120,000 barrels of grain. Nevertheless, the mill at Killincarrig is by any standards a substantial building, dominating the local landscape. The structure as it stands today reveals a basement/ground floor and four upper storeys, partially covered by a hipped slate roof. There are numerous windows, some blocked up. Most of the timbers are said to have been removed for firewood. There is no trace of any of the machinery. Outside, one can clearly see where the giant water wheel was located. The watercourse which powered the mill can be traced. In the north-east corner of the northern wing, there is what appears to be a brick chimney stack extending from the ground floor to above the roof.

The mill probably came into being in response to Foster’s Corn Law of 1784, which provided grants for the export of grain. The cause and date of its demise is unclear. However, the repeal of the Corn Laws in 1845 terminated the preferential treatment given to Irish corn on the British market, and the decline in Irish exports was accentuated by the availability of large quantities of cheap corn from America after the 1850s. Furthermore, with the application of more scientific methods of manufacture such as the roller system in 1883, the old-fashioned local mills were forced to close their doors. Mass production led to surplus stock being dumped on the Irish market at prices below production costs. Notwithstanding those negative developments, in 1907 the Irish milling industry employed five thousand people with a total output of £7,500,000.

Some indication of the layout of the mill may be gleaned from the example of Garrylough Mill in Co Wexford, which is similar in size to Killincarrig, with our mill having an extra storey. The wet or ‘green’ corn was spread out and dried by smokeless heat from an anthracite furnace on the ground floor which passed through special perforated tiles. This might account for the chimney on the north wing. The ground floor contained the main mill gearing, supported by a heavy timber frame. A chain sack hoist transports incoming grain to the upper storage floors. The newly-ground grain is gathered into chutes from the grinding stones overhead. The first floor contains the millstones, operated from the main gearing below via spur and pinion wheels. The second floor contains the hoppers that feed the millstones. The upper floors are for storage, being better ventilated and further removed from rodents.

South of the mill, towards Kilcoole, where the ground is now heavily overgrown, was located a specially-constructed mill pond, where the incoming water was controlled and directed towards the mill wheel. The water feeding this pond came from a diversion of ThreeTroutsRiver. The pathway that is now the right of way from ThreeTroutsBridge to the road at what was formerly Millbrook Nurseries runs alongside this watercourse, and may have been built as a dyke to contain the water. Having passed through the water wheel eastward, the water passed through two arches approximately five metres long by two metres wide. These are still in apparently good condition. Refuse is now dumped in the briar-covered path of this once-vibrant stream, and the mill itself is a haunting monument to a period of prosperity and change in the local economy.