You are here: HomenextPlacesnextNEWCASTLEnextPack Horse Bridge at Kilmartin 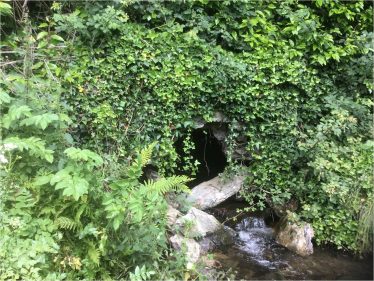 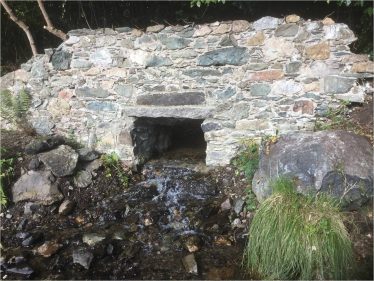 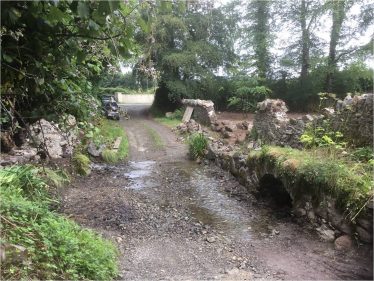 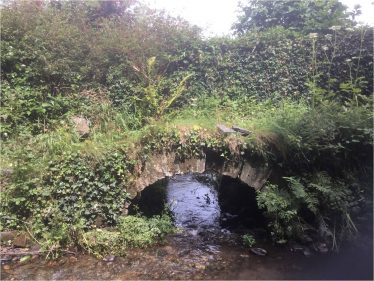 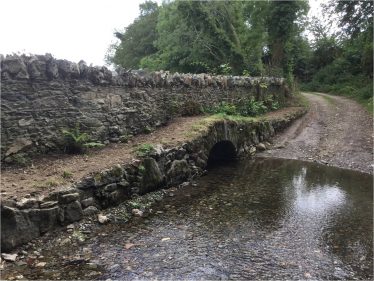 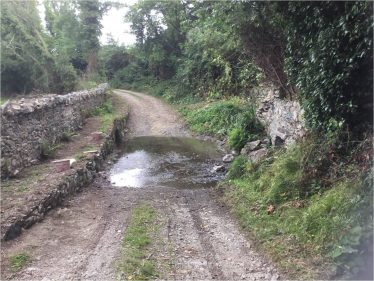 On what was once the main Dublin to Wexford Road 200 years ago, there exists in the townland of Kilmartin, near Newcastle a unique and rare example of a Pack Horse Bridge.

This is a typical Pack Horse Bridge.  Until the mid-eighteenth century carriage of goods around the country was largely done using trains of pack horses or pack mules and it was only with the improvement of roads, road surfaces and the design of wheeled vehicles from the later eighteenth century that this system changed.  Until the mid-nineteenth century, many shallower rivers were crossed by means of fords and pedestrians tended to be facilitated by stepping stones.  Pack horses presented a problem, however, as in hotter weather they would tend to lie down to wallow in the water to cool off if they were brought through a ford and as horses or mules cannot use stepping stones the solution was to build a small bridge adjacent to the ford to facilitate pack animals.

With the construction of bridges to replace fords, most pack horse bridges have disappeared and very few are known.

This bridge and surrounding walls were falling into disrepair and could have been lost forever but the landowner / farmer, Mr. James Norse, was able to apply for funds through the GLAS (Green Low-Carbon Agri-Environment Scheme) Traditional Farm Buildings Scheme, to repair the historic features on the site.  The Heritage Council co-ordinate the scheme, vetting and approving any projects on behalf of the Department of Agriculture, Food and the Marine. They approved the application and oversaw and advised on the works to be carried out.  A conservation architect was required to oversee the detailed conservation work.  Mr. Norse was very lucky to find Mr. Rob Goodbody who has a special interest in old bridges and has given lectures and advised on the subject.  Mr. Goodbody has a number of publications including “Irish Stone Bridges: History and Heritage”.

A bird and bat survey had to be completed before the conservation work commenced.  Mr. Eric Dempsey of Birds Ireland, living locally kindly carried out the survey.  Eric is author of the best-selling ‘Birdwatching in Ireland with Eric Dempsey’ and co-author of the acclaimed ‘The Complete Field Guide to Ireland’s Birds’.

The work was carried out by local builder, Mr. Jonathan Baker, who specialises in old building methods.  Like the original build, only lime mortar and local sand was allowed to be used.  Everyone involved with the project is delighted with the way the work has been completed.  This whole project will ensure the Pack Horse Bridge’s survival for many more generations and is appreciated by the many members of the public who use this laneway for recreational walks and horse rides.

For more on the GLAS Traditional Farm Building Scheme operated by The Heritage Council on behalf of the Department of Agriculture, Food and the Marine  click here