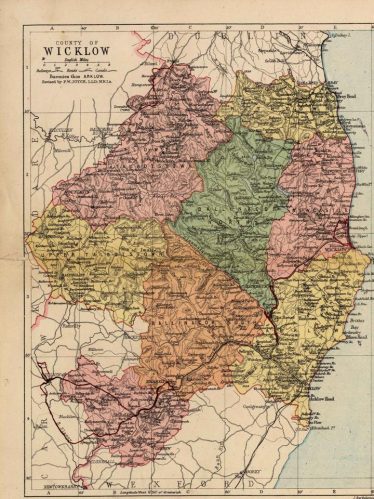 Landscape is steeped in both memory and meaning. In no sense is this more apparent perhaps, than when we consider the various placenames of a locality.

There are over 1,300 separate townlands in County Wicklow, and in examining them we can glean historic, archaeological and cultural information about the area in which we live. To do this adequately however, we must make reference to the Irish language, as the Anglicisation of placenames that occurred throughout Ireland has obscured their original meanings.

A great many placenames describe the physical features of an area quite directly. Glendalough for example, stems from the Irish Gleann Dá Loch, meaning simply ‘Valley of the Two Lakes’. Around Wicklow’s mountainous centre we find curious names such as Djouce, Aghavannagh and Tonlegee. Djouce is an Anglicisation of the Irish Dioghais, itself stemming from the Old Irish word Dígas, which referred simply to ‘A Height’. Aghavannagh most likely comes from the Irish Achadh Bheannach, meaning ‘Hilly Field’, a reference perhaps to the mountainous land of that area. Tonlegee is a slightly more unusual name, coming from the Irish Tóin le Gaoith. This is usually translated to English as ‘backside to the wind’, though there is evidence to suggest that Tóin in this placename might refer not to any exposed backside in particular, but is instead used to mean ground that is poor or marshy. Further, Gaoth in Irish can refer not only to wind, but also to a body of water or inlet. Tóin le Gaoith then, might be understood to refer to a patch of poor ground next to a pool, or watery marshland, a description befitting the nature of Tonlegee Mountain and its nearby lake, and a characteristic feature of many areas in Ireland bearing the same name.

Apart from physical features, placenames can offer insight into the exploits of those who have come before us. In considering this point, it might be worth travelling to west Wicklow for a moment, to the village of Hollywood. Hollywood appears in 1205 AD as ‘Sanctum Boscus’ or ‘Holy Wood’, a name given to the area due to its association with Saint Kevin, the monk and founder of the monastic site at Glendalough. Legend has it that the Saint was being carried through the area by his devotees one day, when they met with a dense wood obstructing their path. Kevin began to pray fervently, upon which the trees of the wood bent to the ground, forging a miraculous trail for the Saint and his entourage. He then pronounced a blessing on the place, promising ‘Hell and short life to anyone who should burn either green wood or dry from this wood till doom’.

Many will doubtless be familiar with the Irish name of Cill Mhantáin which is given to County Wicklow. To explain the origins of this name we must revisit a story associated with Ireland’s patron saint, Saint Patrick. There is a legend told of Patrick, that he and his followers arrived ashore one day in Wicklow. His arrival was not much welcomed by the locals, who began hurling rocks and stones at both he and his entourage. Patrick escaped unscathed. A companion of his however, was less fortunate, being struck squarely in the face by one of the unwelcome missiles and having his teeth knocked out. This individual was subsequently given the somewhat unfortunate, though undoubtedly fitting nickname of Mantach or ‘Toothless One’. Undeterred by his experience, Mantach went on to establish his own church in the area, suitably titled Cill Mhantáin, and later Anglicised Kilmantan, literally meaning ‘Church of the Toothless One’.

The name ‘Wicklow’ itself requires some further exploration, and is most likely of Norwegian origin, brought by Viking settlers to this place. Wykinglo appears as early as 1179 AD, and translates roughly as ‘Vikings Meadow’. In similar fashion, and further south along the coast, we come to the town of Arklow, another settlement bearing a name of Scandinavian origin, understood to translate from Old Norse as ‘Arnkell’s Meadow’, ‘Arnkell’ being a man’s name. Arklow and Wicklow are similar in that they both share separate Old Norse and Irish language names between them. An tInbhear Mór, the Irish language name for Arklow, means ‘The Great Estuary’, referencing the Avoca river that completes its journey to the sea there.

In referring to an area and its inhabitants, not all placenames are quite so benign however. Perhaps we should spare a thought for the residents of Charlesland, the thoroughly modern development located in northeast Wicklow between Kilcoole and Greystones. ‘Charles Land’ appears in 1619 AD as Acra na mBodach. Acra na mBodach however, would appear to have been misconstrued at some stage in the areas history, as it translates not as ‘Charles Land’, but ‘Churls Land’, a churl being a lowly form of peasant.