You are here: HomenextPlacesnextMore Wicklow locationsnextWicklow - Truly the Hollywood of Ireland

Wicklow - Truly the Hollywood of Ireland 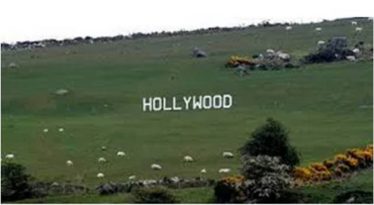 You can hardly move from one townland in Wicklow to another, without coming across a movie set, it seems!  And  terms like “Spielberg”, “Vikings”, and “thrillers set in the Scottish Highlands”, have been bandied about. This is fabulous – bringing employment, tourism, excitement and much more to the Garden County.

Why Wicklow? Well, this county is well placed to be the centre of the film industry in Ireland. It is a large county, beside Dublin, the capital city, but with a lovely spine of mountains in it’s centre forming a National Park, with stunning scenery, unsullied by phone masts and the like. There are many large private estates still intact within the county, and they have offered great locations and privacy for many productions. The proximity to Dublin solves issues like accommodation and it costs less to have skilled craftspeople travel to Wicklow rather than down the country. There have been film studios in Wicklow for over sixty years and recently planning permission was given for more studios, reflecting confidence in the business. 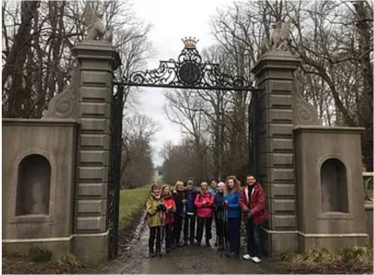 Fake pillars at a film set in Hollywood

The quality of the work done by set designers and builders is simply stunning. Recently, on a tour of a magnificent private estate, my group and I were amazed to see that the ordinary tubular farm gate at the end of an avenue had been replaced by an extremely grand new entrance. It was done so well that you had to knock on the “stone” to realise that this was simply plywood, painted so well as to look like aged stone.

Last Christmas, another remake of the classic “Little Women” was shown. Many of the exterior scenes were shot in County Wicklow and I was lucky enough to come across the set the day they started dismantling it. On a grey spring day, it looked very convincing, even though I discovered the “snow” on the gate piers was in fact, shredded paper! 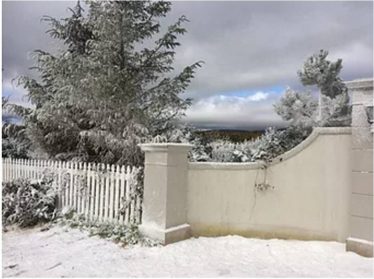 A film set in Hollywood Wicklow

My family also have direct experience of living in a “film set”. Not long ago, their old farm house was chosen as one of the locations used for an off-shoot of a British Soap Opera. The farm was chosen partly because the front and back of the house look totally different and could be used as two different houses for one location base. Their takeover of the house was total – most rooms in the house were used and most were repainted for this purpose. My parents had the “interesting”  experience of having a “corpse” laid out on their bed, for several days, while shooting a major scene – they had to move to another bedroom! A new “porch” was added to the back of the house and again, you have to get up close to realise that this is not built of stone as it is done so well. 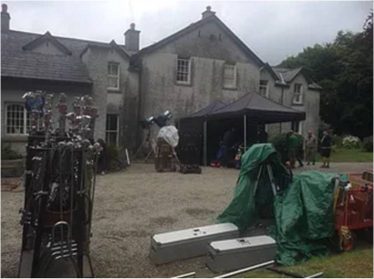 And in a nice piece of “repurposing” – the porch was left behind when the film crew left and my mother has been using it as a nice private place for hens to sit on eggs when hatching out chickens!! 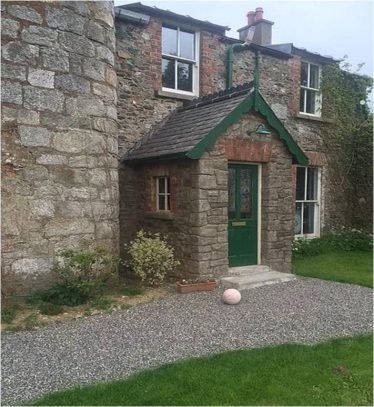 This article was taken from the blog ‘Ireland Tour Guide’ by Dairine Nuttall. See here to view the blog