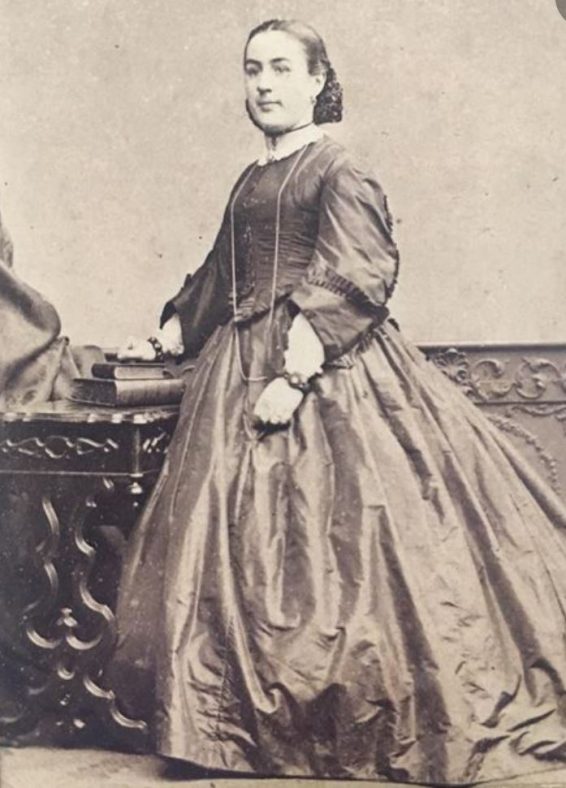 Born in 1842 to Richard and Mary Johnson of Millmount House, Avoca, Teresa Elizabeth Dargan nee Johnson was the grand niece of Archbishop Daniel Murray of Sheepwalk, Arklow – her family previously owned the mines at Tigroney and Cronebane, Avoca.  Teresa married civil engineer James Dargan at St. Patrick’s Church Avoca in 1866 – James was the nephew of the famous engineer/contractor William Dargan, a name synonymous with the history of the Irish railway.

Ahead of her time 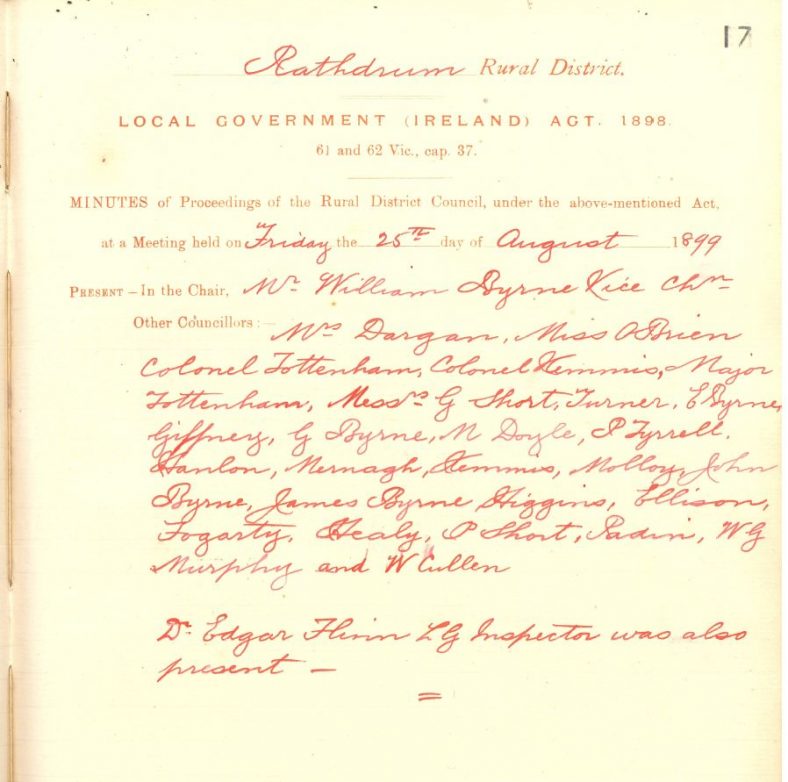 In that year, Teresa Dargan was one of 31 women in Ireland who were elected for the first time to rural district councils and 4 to urban district councils. Under the 1898 Act, women over 30 years, who were householders or who rented a portion of a house, valued at a minimum of £10 per year could vote in local elections and could stand for election. It was not until 1918 that women could vote in national elections.

In the early years, some of the women elected to local authorities were members of Cumann na mBan and were passionate campaigners.  Indeed, the minute books of both authorities reveal Teresa to be an intelligent and diplomatic woman with firm principles, concern for the poor and well respected by her peers. 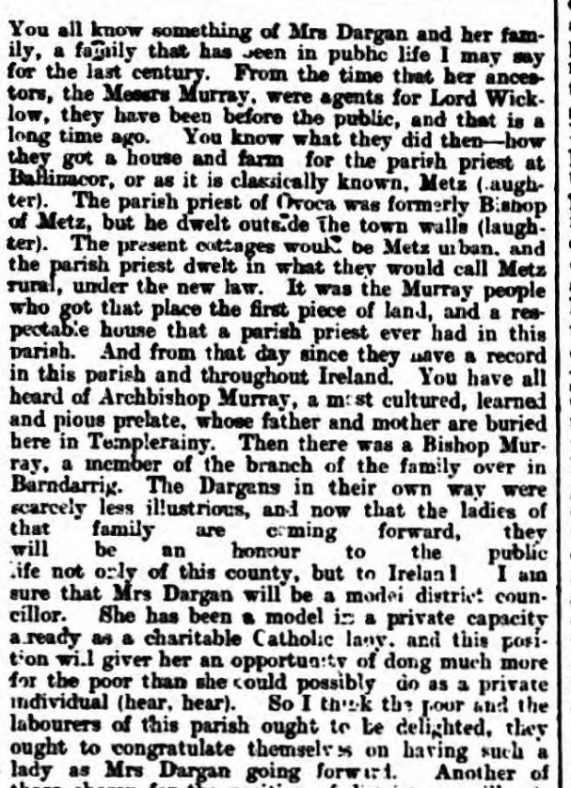 Arrest of a priest

In 1889, reports in the local and national press describe how Teresa tried to prevent the arrest of a priest staying at her home in Millmount House, Avoca.  The RIC reportedly had to force entry and arrested the priest for making speeches against a recent eviction. 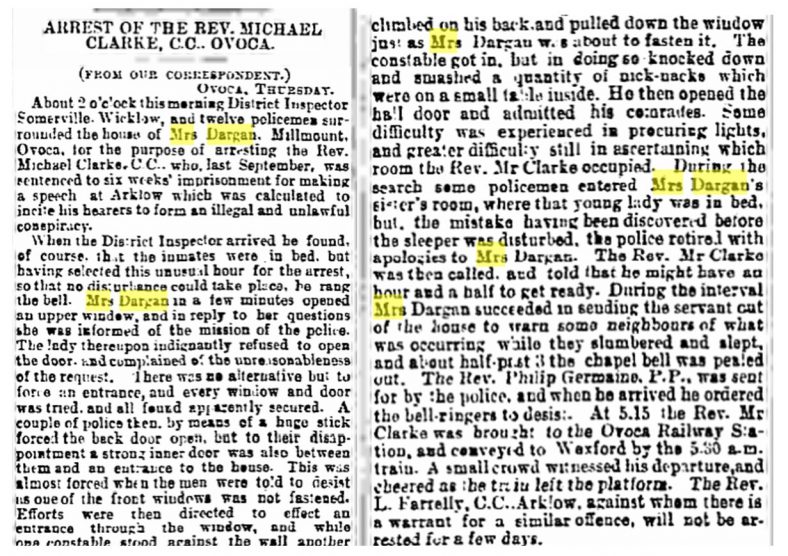 In 1902 two women who went to the dispensary claimed they had their hair cut off by force and threatened to sue the Rathdrum Guardians.  Mrs. Dargan appears to side with the women: 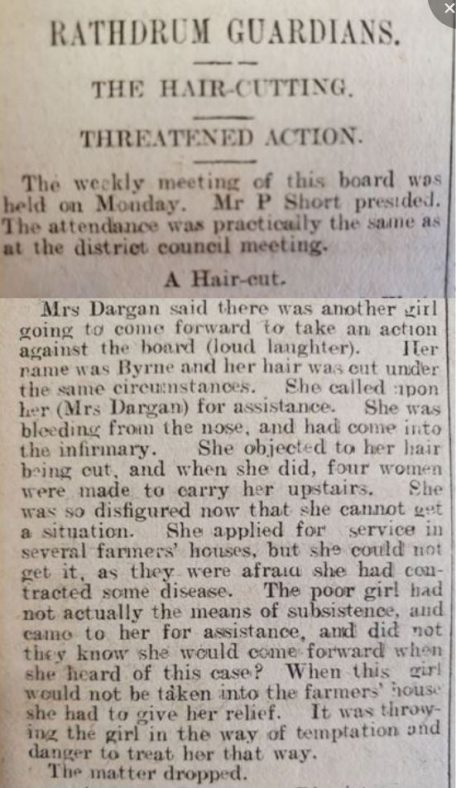 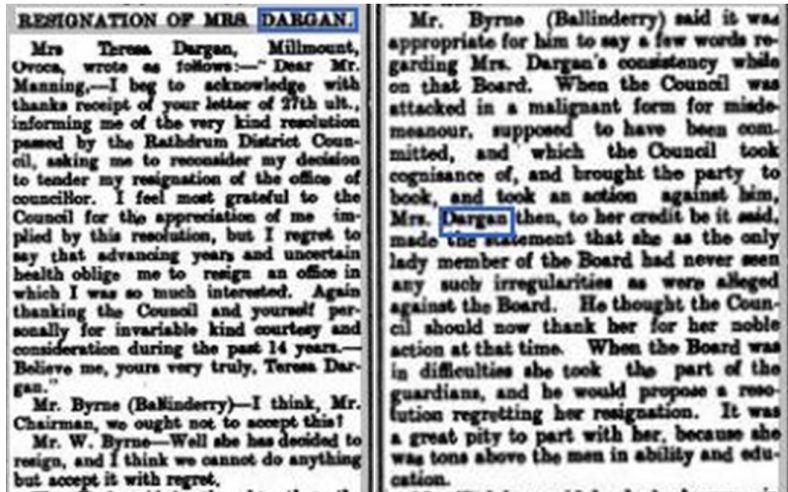 This eminent lady passed away at her home in Millmount House, Avoca in 1929 at the age of 86 years.

(With thanks to the Dargan family and the “Youwho?” volunteer project recording the Grand Houses of South County Dublin – see https://www.youwho.ie/dargan.html )