You are here: HomenextPlacesnextAVOCAnextWhaley Abbey

The ITA Topographical and General Survey of Wicklow (1942/3) from which this article is adapted is a valuable resource for Wicklow’s history both prior to, and during, the 1940s.  It is held by Wicklow County Council Library Service. 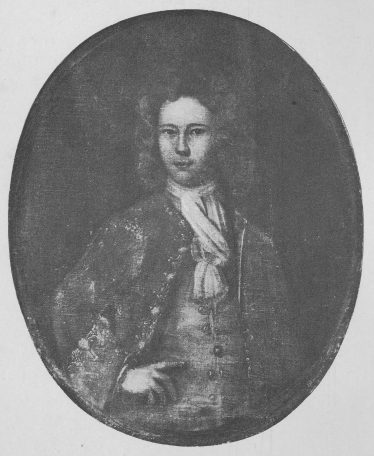 In 1658, Oliver Cromwell wrote to his son Harry, the Lord Protector of Ireland, commanding to his care his cousin Whaley.  He thereby established in this country a rapacious adventurer whose race continued with all its excesses down to 1800 when the last of them died in extreme poverty.  Harry the “Protector” granted to Whaley, his relative by marriage, great tracts of land in Wicklow and other counties and, accordingly, the place spoken of became known as Bahana Whaley or Whaley Abbey.  One member of this family, Richard Chapel Whaley, MP for Co. Wicklow 1747-1760, known as “Burn Chapel Whaley” owing to the number of Catholic Chapelries which he destroyed as “Commissioner of the Peace”, was a vicious persecutor of the Papish Ecclesiastical priests.  Son of this man was Thomas Whaley, better known as “Buck” Whaley, the dissolute rogue of the late 18th century in Dublin.

The stories of his gambling and fast living are related even to the present time: his associations with the “Hell Fire Club” in the Dublin Mountains, his dogs and racehorses, his race-course in the grounds of Whaley Abbey and, most famous of all, his wager to journey to Jerusalem, play handball against its walls and return inside two years during the height of the Napoleonic Wars, a feat which he accomplished thereby winning, as a result, £16,000.  This man who inherited £60,000 in money and an income of £7,000 p.a. in the course of a few years dissipated a fortune of £400,000 and died penniless as the last of the Whaleys. 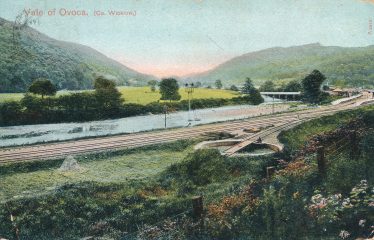 Bahana (“The place of the birch trees”) Whaley, overlooking the beautiful Vale of Avoca, is an enchanting spot and little is it to be wondered that it was chosen by “Cian”, a relative of Caoimhghim of Gleann Da Loca (St. Kevin) as a site for a monastery.  There is a good deal of controversy as to who exactly Cian was.  According to Canon O’Hanlon in his Lives of Irish Saints, she was a virgin and possibly a sister of St. Kevin.  The abbey, which apparently stood somewhere close to the present graveyard but of which there is now no trace, was in use until approximately the 11th century at which time many of the Celtic monasteries closed down.  The church is believed to have been used by the people and was mentioned as one of the churches of the Dublin Diocese in 1275.  It is thought that it was used up to the late 16th century and then fell into disuse.

In the centre of the graveyard is the ruin of a church, the bare outline of the foundations being visible.  Whether or not this was the original church it is difficult to say, but it may be as it is apparently in disuse for a very long period.  In the graveyard are a number of XVIII century headstones which may be interesting.  There is free access to the graveyard, etc.  The house of Whaley Abbey is occupied but the owner is of the opinion that only a very small portion of it is the original building as it has been many times renovated since the time of the Whaleys. 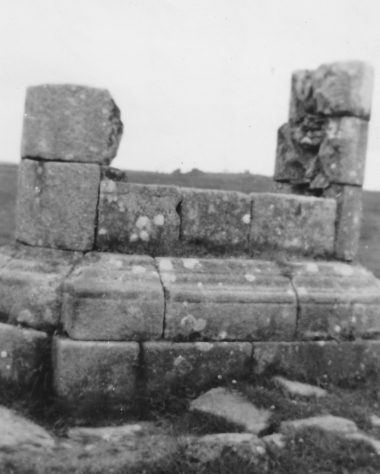 In the field opposite the house, which was once the racecourse, can be seen the broken-down monument which once stood there.  Regarding the exact purpose of this it is obscure but it is said to have been erected in hour of King William.  The location of Whaley Abbey is to the left of the Aughrim-Ballinaclash road, one mile south of Ballinaclash.  It also overlooks the “Meetings” and the village of Ballinaclash, better known as “Clash”.

There remains a legend around Avoca, though not now generally known and it is as follows:

“Cian the brother of St. Kevin was sent by him to mind sheep one day and he was instructed to give them his whole attention but unfortunately he became distracted by a beautiful deer.  Overcome with remorse, he confessed his fault.  Kevin, being very austere, directed him for penance to walk backwards with his face towards Glendalough along the Avonmore River holding a withered holly branch and continue until it should turn green again.  At the “Meetings of the Waters” his holly became miraculously green again and at the nearby Bahana he established his monastery.  Until recent years the “May-hole” at the “Meetings” was bathed in for its curatine properties”. 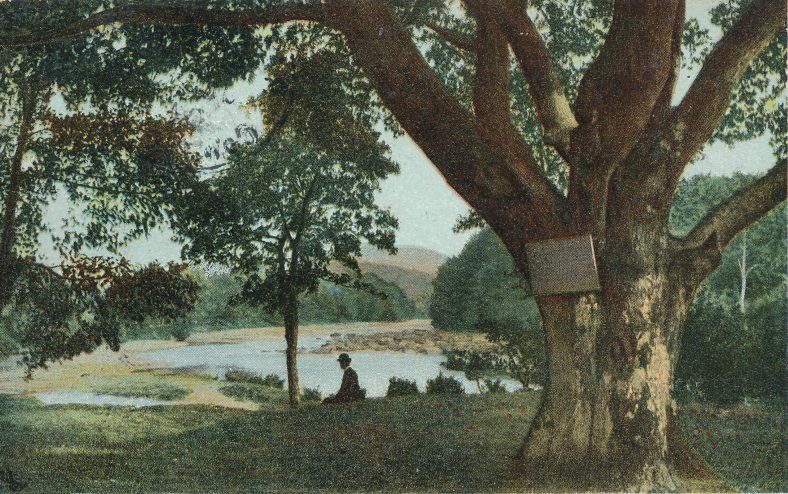 Meetings of the Waters, Avoca