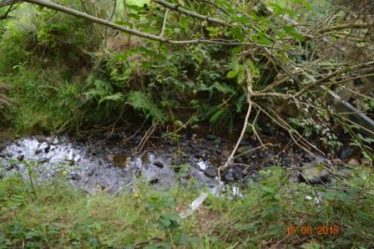 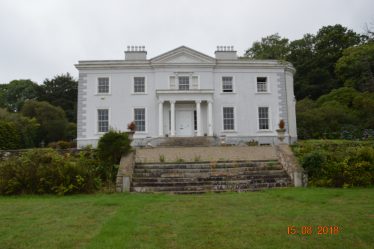 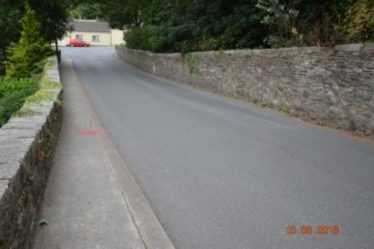 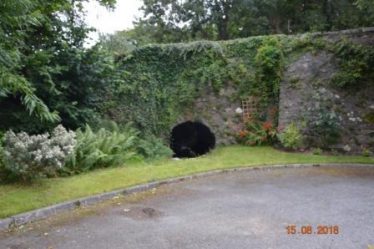 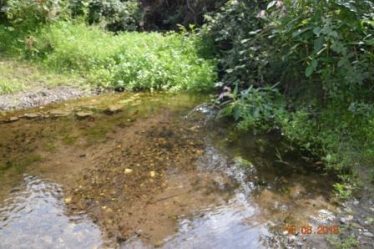 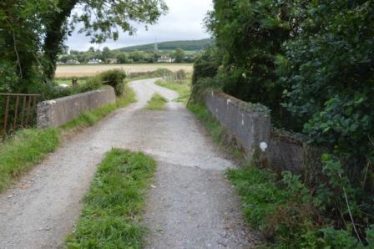 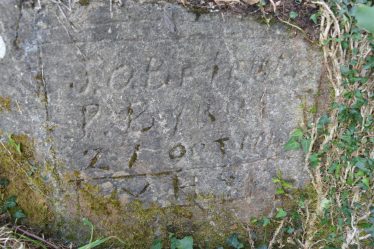 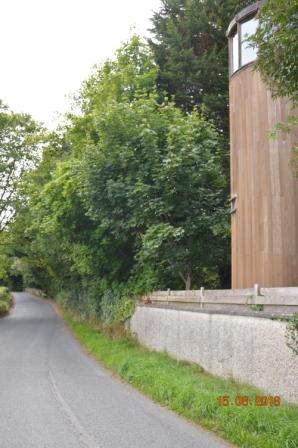 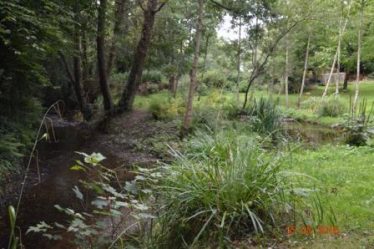 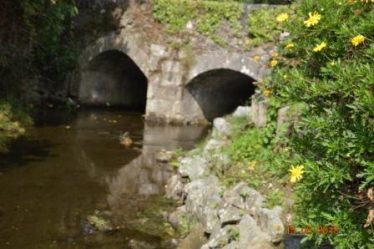 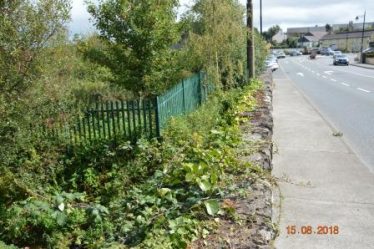 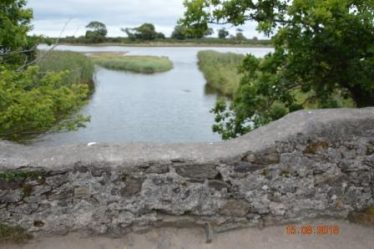 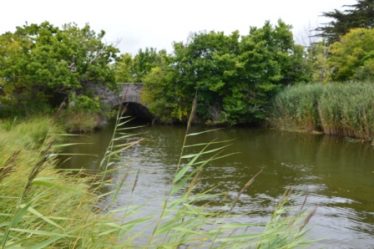 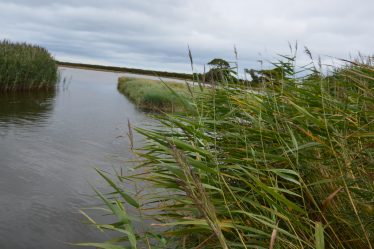 Eventually, all things merge into one, and a river runs through it. …

The Ann – beginning and source of this river

This is the story of a small river in east Wicklow which connects the villages of Glenealy and Rathnew to the Broadlough Estuary.  The River Ann originates in a small boating pond close to Ballyfree House, Glenealy.  This pond is fed by springs.  The house was the former home of Mr. O.D. Philips of Ballyfree Farms and is now owned by Mr. Maurice Sheehy.  The Ann is also joined by a number of tributaries, one of which, comes down from near Carrig Mountain and more streams join near Ballyknocken Beg and in Rathnew.  The main bridges spanning the river are starting from source such as the Glenealy Bridge, Ballyknocken Beg Farm Bridge, Milltown Bridge, Rathnew Bridge and Broadlough Bridge.

What’s in a name?

Although there is some debate as to how this river got the name ‘Ann’ at Glenealy, there is a long held local theory which connects events in the 1600s to the naming of the river.  During the mid 1600s British forces swept through Wicklow to crush the Rebellion and they would also have been instructed to anglicise the Gaelic inhabitants of Glenealy, who spoke the native tongue up to that period.  It is possible that the locals called the river, ‘Abhainn’ which the British may then have incorrectly translated to ‘Ann’.  By the time the river reaches Rathnew it is known as ‘The Slang.’ (Abhainn na Stéille).

There were many spring wells along the course of the River Ann and the locals in Glenealy used these for fresh drinking water.  The most famous of these was known as Droughts Well.  This well was located behind the old Ballyfree offices.  Another well was to be found in the Pond Field, formerly owned by Brierton’s and later McCall’s, and now the location of the Chestnut Glen housing estate.

The ‘Ann’ has seen plenty of bloodshed down through its history.  In 1642, some of Sir Charles Cootes’ forces, under the command of Lieutenant Crawford and the butcher Captain Gee, burnt an elderly man alive (Mr. Daniel Cunniam) on the old bridge in Glenealy.  Mr Cunniam bravely refused to give the soldiers the name of a local priest whom they had wished to murder [Read The Tragedy of Daniel Cunniam on this site].  In 1649, Oliver Cromwell, while on his infamous rampage of destruction from Drogheda to Wexford, turned his cruel attention to Glenealy by burning the church and slaughtering many local people at Madden’s Bank which was in the field opposite St. Joseph’s Church.  Farther downstream at Milltown, it is believed that King James stopped to wash his hands in the river while fleeing from defeat at the Battle of the Boyne in 1690.  It was considered to be a bad luck river by some because of this incident.

Tommy Glynn of Glenealy remembers hearing a story as a young lad, concerning the pond where the River Ann rises.  Sometime in the 1880s the then owner of Ballyfree House hosted a weekend party for one of his children, then, a university student.  A number of the lad’s friends were invited down for a party and during the night he and three of them decided to go out on the pond in a small punt.  It is believed that the pole they were using got stuck in mud at the deepest point in the pond and two girls in the boat may have panicked and stood up causing the small craft to capsize.  All four of the students perished in the tragedy.  It is said that sometimes the screams of the girls can be heard around the pond at night!

Meandering from Glenealy to Rathnew

The Ann flows east after Glenealy through the townlands of Ballyknocken Beg, Ballymerrigan, Milltown and Ballybeg.  Mr. George Webster of Ballyknocken Beg Farm remembers working on the river with local men to straighten out some of the sharper bends and thereby prevent frequent flooding.  Over seventy years ago, a Wicklow County Council work team were engaged with a drag line to clean the river banks and channel.  At Ballyknocken Beg Farm the parapet of the farm bridge, displays the names of local men Peter Byrne (Rathnew), and Joe O’Brien (Glenealy), who built the bridge in 1949.  On the parapet the inscription W.H.S “We have suffered” isa reference to the hard manual work involved in mixing the concrete to construct the bridge.  Farther downstream the river flows through Milltown and gives this town-land its name as a reminder of the old corn mill which existed here as a small mini industry harnessed the water power.  Water from the river was also once used here in the production processes at Rathnew Brickworks where the fine clay found in the area was ideal for brick making.  Milltown was also the location of an Anglo Norman settlement.  Flowing down from Milltown the river becomes known as ‘The Slang’ as it flows through the lands of Clements Farm through a large tunnel under the N11 motorway and into the town-land of Ballybeg and Rathnew Village.

‘The Slang’ at Rathnew

At Rathnew ‘The Slang’ has played an important part in the life of the village down through the years.  Its waters were used by the forge at Ann Lait’s and at the old overflow stables which were located beside the river at Rathnew Bridge.  The bridge at Rathnew was reinforced some time ago and has stood the test of time in carrying huge volumes of traffic today.  The Slang River has provided a natural amenity for the people of Rathnew for generations.  Fishing was a popular and profitable pursuit when a freshet came down the river and fishers such as Patrick Hunter, John Duffy, Ned Byrne (RIP) and Tommy Smullen (RIP) caught their fair share of trout with rod, line and earthworms.  In times past, the ‘The Slang’ river often acted as an athletics course as some of the locals developed a fondness for jumping over the river while wearing their Sunday best and many a young man walked up Clare’s Hill or The Rock, dripping wet!  Cock fighting once went on too on the Dublin side of the river, timber planks being put in place to allow the spectators to cross but this temporary ‘drawbridge’ was quickly removed if the authorities turned up to stop the illegal activities.  From time to time, temporary dams were placed in ‘The Slang’ to make ideal swimming pools for locals during times of hot weather.

Below Rathnew Bridge the river passes through what was once Dick and Maggie O’Rourke’s field and the site chosen for a Wicklow County Council operated waste water treatment plant.  As Rathnew’s population began to grow this facility was operating beyond its design capacity with the result of heavy sewerage pollution from an outfall pipe.  Happier times came for The Slang River with the commissioning of a new sewerage treatment works at The Murrough in Wicklow.  Leaving Rathnew, the Slang river flows down between Woodside and Clermont and here at one time water was diverted using wind power and gravity to feed a large garden pond in the Clermont Estate.  As the river runs on between Clermont and through Lower Tinakilly its character begins to change to slow glides and deeper pools before finally reaching the tide close to the Broadlough.  The river then empties into Broadlough Estuary and from here to the Irish Sea at Wicklow and it, along with its cousin, The Vartry River, assumes the general name of ‘The Leitrim River.’

The Ann (Slang) river was a source of pure water from pagan times but became polluted with sewerage and from small enterprises built on or close to it.  The river was badly affected by sewerage and other pollution at Glenealy and at Rathnew at various times throughout its history.  While the river had its problems, it was considered to be a viable river at one time with salmon, trout and eels. A recent survey carried out by the Environmental Protection Agency in 2012 found “unsatisfactory moderate ecological conditions in the lower reaches (0600) of the Rathnew Stream.” Household rubbish and enriched conditions were also found in the river and act as reminders of the importance of preserving and respecting our rivers and water courses.

Today the river is a rich and living natural habitat for brown trout, sea trout, eels and the occasional Salmon.  The hedgerows and banks of the river throughout its length support a variety of flowers, fauna, wild rabbits, hares, otters and birds including the Grey Heron.

Special thanks to the following contributors to this article: