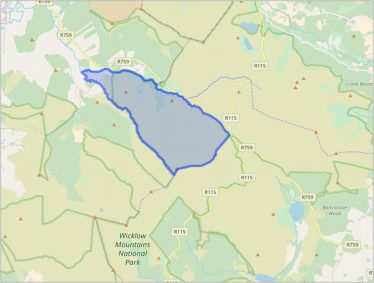 The River Liffey descends on a westward course through the mountains. Just beyond the Coronation Plantation, on the south bank of the river and within the Wicklow Mountains National Park in the townland of Ballynabrocky. Here a low hill just under 400 metres in elevation overlooks the valley.

The Irish name for Ballynabrocky is Buaile na Brocaí, or the booley house of the badger’s den, a name that was recorded as far back as the Down Survey of 1655. On the eastern slopes of the hill are the remains of half a dozen mountain huts. Only the lower walls, which have been overgrown by vegetation, remain. The huts are rectangular and each one measures between 3 to 5 metres long and about 2 metres wide. Situated in close proximity to one another in a north-south line of about 50 metres, the name of the townland gives some clue as to the purpose of these huts.

Booleys were simple, single-room dwelling houses built by herdsmen who brought their cattle into mountain pasture areas during the summer months. Here the livestock would be grazed on the summer grasses that flourished on the mountain slopes. The longer days and fine weather meant that much of the day was spent outdoors, so that simple huts were all that were needed.

Many upland areas of Ireland would have been and still are commonage, meaning that the land was not owned by any single individual. Instead numerous farm families held traditional grazing rights in these remote mountain areas. Booleying was common in Ireland until the 19th century but died out as agricultural techniques and landholding patterns changed. The practice is widespread around the globe and is more commonly known as transhumance.

It is difficult to say how old the huts in Ballynabrocky are or who resided in them. They area a poignant reminder of a much different way of life for the people who once lived here. The valley to the east is known as the Shaking Bog. We can guess that this name comes from the nature of the underfoot conditions. Blanket bog can often take on the qualities of a quagmire, and the spongy ground will shake and wobble if walked upon.