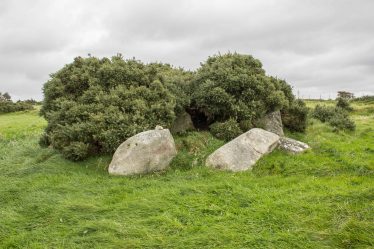 Lugnagun Mountain overlooks Blessington Lake from the east and the western slope of this mountain is a treasure trove of prehistoric structures. Perhaps the most significant is Carrig Wedge Tomb, located on the lower slopes of the mountain north-west of Lackan village.

Wedge tombs date from between 2,500 and 2,000 BC and represent the last phase of megalithic tomb building, following on from court tombs, passage tombs and portal tombs that were built earlier in the Stone Age. Generally found aligned in a westerly direction, they are long and narrow features with the burial chamber located at the eastern end. However, the Carrig tomb is aligned west-southwest to east-northeast. Their name derives from their shape, as they are generally broader and higher towards the front. 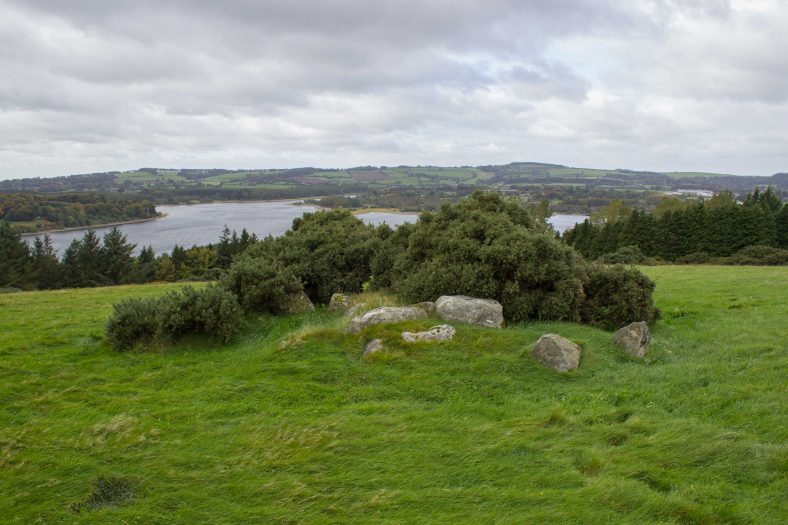 Wedge tombs were constructed of large stone placed in upright positions known as orthostats. They were then roofed with flat stone placed on top of these walls. The entire tomb would then have been covered by a cairn of stones. At Carrig, the broad outline of the tomb is visible and the inner galley measures 6 metres by 1 metre. A number of stone slabs in the surrounding area may once have been roof slabs.

Several other prehistoric sites can be found on the western slopes of the mountain. Closer to the summit there are burial cairns, a standing stone and a feature which may be a cursus. A cursus is a long, narrow rectangular earthwork dating from the Stone Age, which is like a passageway between to parallel banks. They are somewhat mysterious features but may have had some ceremonial function for ancient rituals. The cursus on Lugnagun extends over a distance of 600 metres.

Taken as a whole, these features prove that there was significant habitation and activity here over 4,000 years ago.