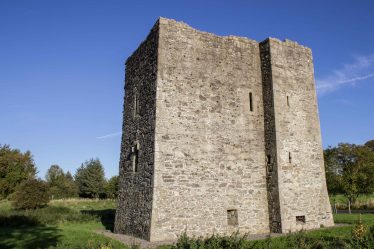 Just south of Kilbride and overlooking the shores of Blessington Lake and in the townland of Threecastles, stands a medieval towerhouse. As the placename suggests, there were once three castles in this area, but this is the only surviving building. Early 19th century Ordnance Survey maps indicate that a second castle stood about 300 metres to the east. The location of the third castle remains a mystery.

In the 12th century the land here was under the control of the Archbishop of Dublin. It was known as Coilleach, which indicates that it was densely forested. Later the region was seized by the O’ Toole’s, Wicklow’s most powerful clan, who held sway for more than two centuries. Throughout this period, rival Irish clans and dynasties vied with each other for power and land. In the late 15th century the Fitzgeralds, Earls of Kildare, emerged as the most powerful force in Ireland. English influence, meanwhile, was confined to a small area around Dublin known as the Pale. The area around Threecastles was where the territories of the Fitzgerald, O’ Toole’s and English collided and so was the scene of constant struggle.

Gerald Fitzgerald, Lord Deputy of Ireland, took control of this area from the O’ Tooles around 1500. It is likely that he or his son Sir James Fitzgerald built the castles which gave the area its name. They were strategically located overlooking the River Liffey, long before Blessington Lake was formed. This was done to provide a line of defence against attacks from the O’ Toole’s and other Irish clans who inhabited the mountains.

Throughout the 1500s, this region was the scene of constant strife. During Christmas 1523, the Fitzgeralds murdered Sir Robert Talbot, the Sheriff of Dublin. Sir Piers Butler led a revenge attack into Wicklow and took over all of the Fitzgerald castles in the locality. Fitzgerald influence in West Wicklow declined even further following the disastrous failed rebellion of Silken Thomas in 1534. 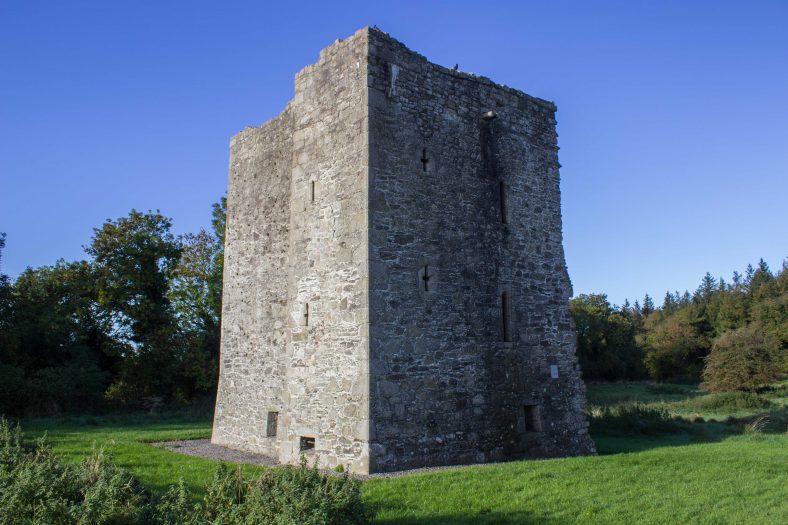 Turlough O’ Toole took the opportunity to assert his control in the area. In 1538 he was embroiled in a dispute with John Kelway, the royal constable of Rathmore, who had hanged two of O’ Toole’s servants. The O’ Toole’s laid siege to Kelway and his men when they were holed up in Threecastles, and slaughtered him and sixty others in a bloody encounter.

The fluid nature of medieval alliances was apparent just a decade later. In May 1547, Brian O’ Toole, a son of Turlough and known as Brian an Chogaidh (Brian of the Wars) joined forces with the English under Sir Anthony St Leger. They defeated the Fitzgeralds at Threecastles, after which Henry and Maurice Fitzgerald were brought to Dublin to be hanged, drawn and quartered.

The surviving castle is an impressive and well-preserved structure, with granite walls between 4 and 5 feet thick. It appears that there was once a structure attached to the west side of the tower. Although there is no access to the interior of the castle, the grounds surrounding it are well maintained and it provides a good opportunity to appreciate a medieval building at close quarters.