A few years ago, I got involved in organising a presentation on Calary Races as part of Kilmacanogue History Society’s programme. I was assisted by John Doyle of Bray who was writing a piece on the same topic. We spent a very enjoyable evening drinking whiskey in the home of the late Jack Roche, on whose  Carrigower farm the racing activity was based, recording his memories of an event that was enjoyed by a wide selection of  people.

Calary Races ran from 1902 to the late 1950’s and were run by Bray Harriers, a hunt that is still in existence. In an era when there was far less in the way of entertainment, and people had far lower expectations of comfort, this was a major event and always was held on “the first wet Wednesday in April” according to locals. This was the last point to point before the Punchestown Festival and last chance to “get a race into your horse”.

The course was listed as being about 4.5 miles and usually incorporated some strong stone banks and the occasional timber gate. By 1905 there were four races – the first three with entries named and the fourth was a consolation race for those horses unplaced in the first three races – tough horses!  By 1940, it had risen to six races, the final one being the “Farmer’s Race”. There was a “ladies race” but lady riders also competed  in other races and regularly featured among the winners. 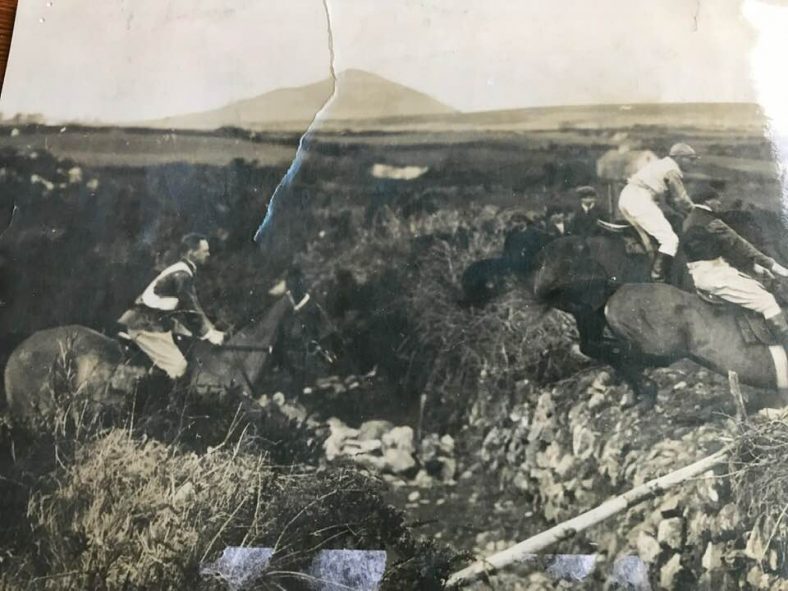 This photograph shows the Collen brothers clearing the stone wall jumps – while the quality of the image is not great, the  Sugarloaf is clearly recognisable and this photograph was taken somewhere in the Carrigower area.

Horses had to be fit for this point to point

Horses had to be fit for this point to point. Many of them were walked up to Carrigower, sometimes from the train in Greystones, and they resided in Roche’s Yard for up to 12 days before the event so they could be “schooled” over the jumps. The ritual of laying out the course began the Friday before the event when the course was laid out using flags. In Jack’s words, “the most ignorant banks in the place would be chosen”!  Every farmer across whose land the course was laid had to be visited and entertained, both before and after the race itself.

Interest in this event was probably peaked during the 30’s and 40’s and it is estimated that as many as 10,000 people attended, travelling in cars, lorries, traps and carts. There were three beer tents, operated by Keenan’s of Roundwood, O’Donnell’s of the Horse and Hound in Delgany and Egans of Newtownmountkennedy while the tea tent was operated by the well known Mrs Bolger. Schools were closed for the event too – this was an big occasion in the Calary area.

I worked for former Taoiseach  Dr Garret Fitzgerald, who lived in Fairy Hill, Bray during the early 30’s,  and I asked him if he had ever attended these races. He told me that his parents felt that there was too much drinking and “carry on” at this event to allow children attend!

When you look at the spectators, they are dressed for warmth and comfort – no fake tans or mincing around on high heels here. -Take a look at the fabulous photo below… 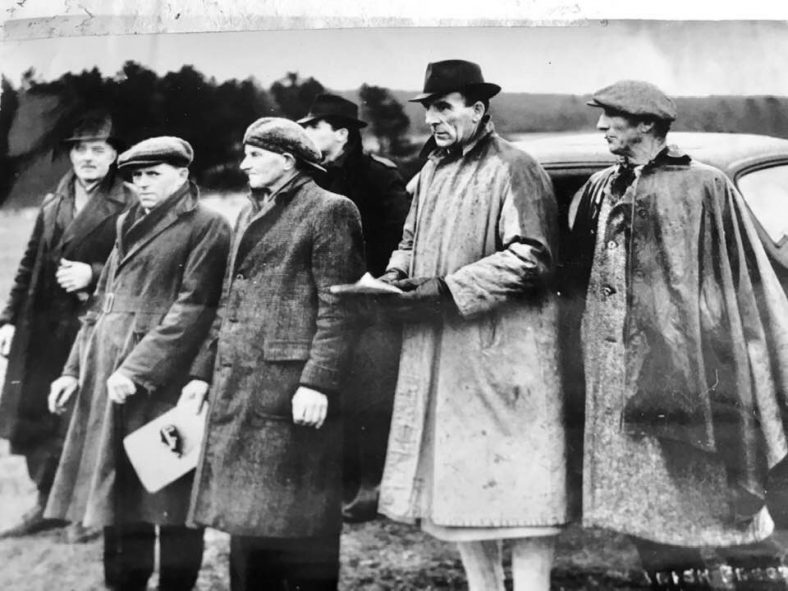 These gentlemen have been identified as (L to R) Ned Murphy of Mullinaveigue, Fred Doyle, Roundwood, Terry Kavanagh, Knockraheen, Michael O’Brien of Lehaunstown and Jack Roche. Their attention is firmly fixed on the action, and all wear hats and coats to keep out the elements rather than being slaves to fashion!

Michael O’Brien was Master of the  Bray Harriers Hunt for close to forty years and when the  point to point moved from Calary in the 1950’s,  it was held on his farm at Lehaunstown, Cabinteely for a few years. Today, Lehaunstown is a stop on the Luas, and the fields of his farm are about to undergo development as Dublin expands southwards. 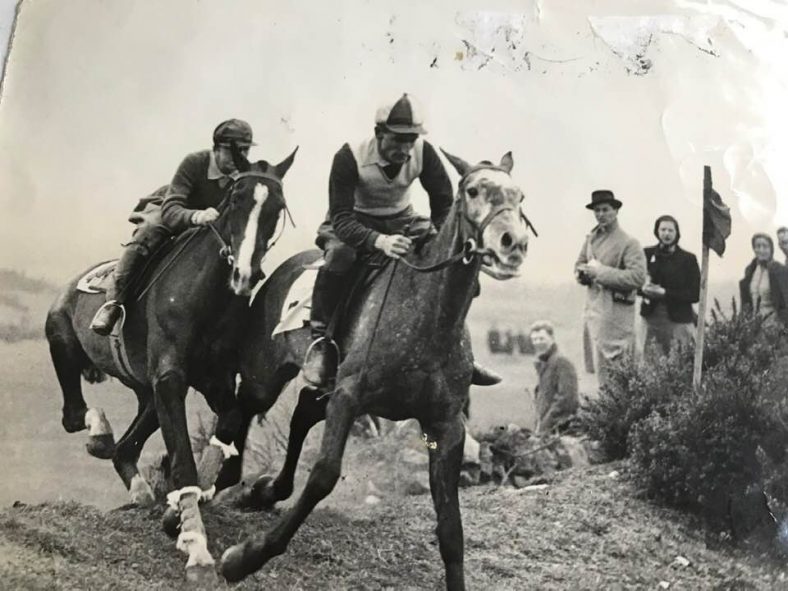 Those in attendance could get very close to the action as this photo shows. Of course there were accidents – an ancestor of mine, Arthur Nuttall was” killed in an accident whilst riding at Hillside Harriers Point to Point”, according to his headstone in Calary Parish graveyard. 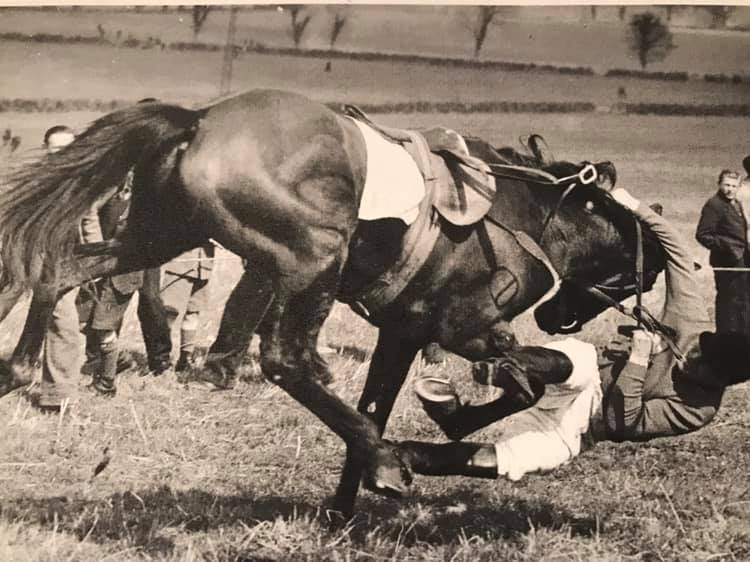 John Doyle recalled his father riding at Calary and sustaining a bad fall. As petrol was in short supply he had to wait in the ambulance until the event was over in case anyone else needed it – there was not enough fuel for two journeys! 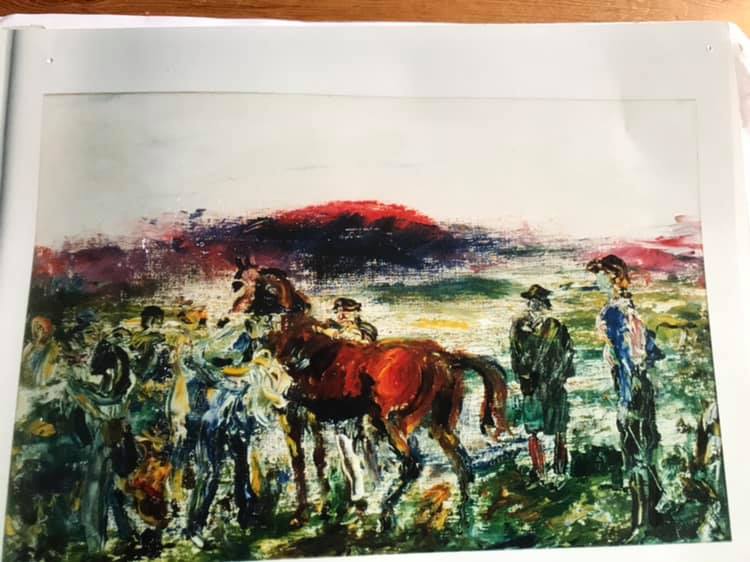 The figure coming into view on the left is said to be Yeats himself. According to his biographer, Hilary Pyle, Yeats had wandered away from the crowd and found a family very busy getting this horse ready. He said to the father “What chance has it?” The man replied rather furtively that it had been a bit lame that morning. Yeats said he went back to the bookies and put a half crown on!