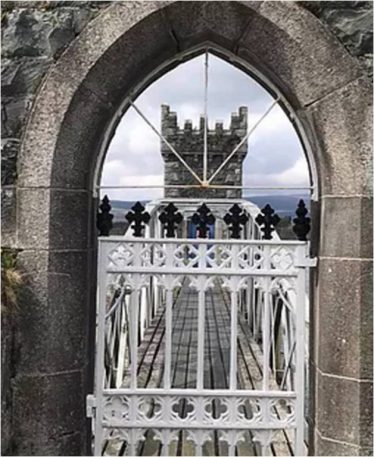 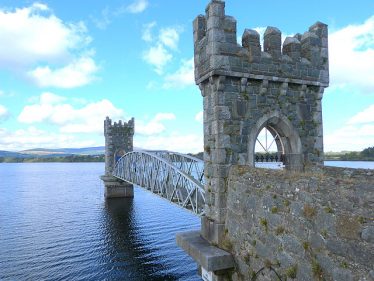 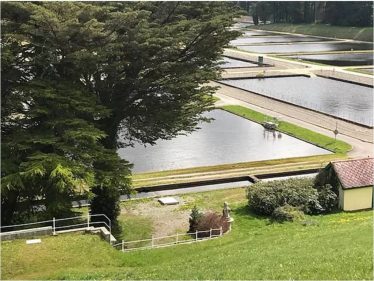 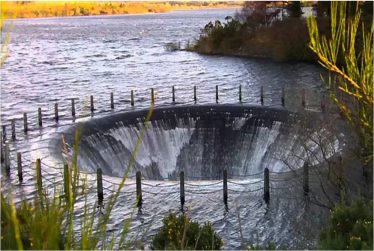 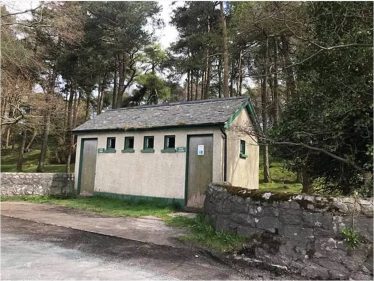 The history of the Vartry Reservoirs is interesting, and well documented. We can thank Sir John Gray, (remembered with a statue on O’Connell Street, close to the junction with Abbey St) for this. He was the city doctor at a time when Dublin had a big cholera problem. The main sources for drinking water at the time were either the canals, or the rivers, and they were not clean.  Sir John Gray badgered the city authorities until they took action and chose the boggy uplands close to Roundwood, where the Vartry River made its’s way through, en route to Wicklow. The first reservoir (the lower) opened in 1868.

The quality of the construction is stunning. The picture above is the lovely “Draw off” tower which is basically a plug holder that looks like a small castle, and must be the most photographed building in the Roundwood area. Even the gate to the bridge is wonderful.

Below is a shot of the filter beds where water is cleaned, filtered, and chemicals are added – the business end of the project. If you look closely you can see a bust of Sir John Gray overlooking the scene.

As Dublin expanded, the demand for clean water increased and a severe drought in 1883 put huge pressure on the supply. The decision was made to construct a second reservoir and this work took place between 1908 and 1925 and the project included the construction of two new reservoirs at Stillorgan and a new valve house.

It is interesting to reflect on what was happening in Ireland during this time – home rule getting close to a reality, the outbreak of the Great War, the Easter Rising, the War of Independence, the creation of the Free State, and the building of this reservoir. The construction of these reservoirs were huge undertakings and employed hundreds of workers. My grandparents always referred to the area close to the embankment as “Tin Town” as in the 1920’s there was a temporary camp built here for these workers.

Fortunately the plans and drawings of the work have all been preserved and some photographs were taken of the building of the embankment. This was an era before “Health & Safety” and Hi Vis vests and helmets. The workers, who were most at risk wore soft hats, while “management” wore either bowler hats or top hats.

The “overflow” was a source of fascination and nightmares – it was not fenced off in the early 1970’s so you could get close to the bell shaped hole – 72 feet in diameter and 39 feet deep. If you fell in there, you were not getting out.

Why was there a block of toilets out in the middle of nowhere? (beside the filter beds and across from the reservoir wall). A talk given by Ned Fleming, of the Vartry Waterworks shed some light on this. It was really  interesting as he showed many of the drawings and photographs of the construction works. Apparently during construction works, the Vartry Reservoir became a tourist attraction with coaches and charabancs leaving Bray Station, bringing tourists to admire the new filter beds and Draw off tower. And as we know, where tourists flock, toilets need to follow!

This article was taken from the blog ‘Ireland Tour Guide’ by Dairine Nuttall. See here to view the blog