Niall Keogh describes the birding at Broad Lough, Wicklow Harbour and Wicklow Head. All the bird photographs in this feature were taken locally by Conor William O’Brien. 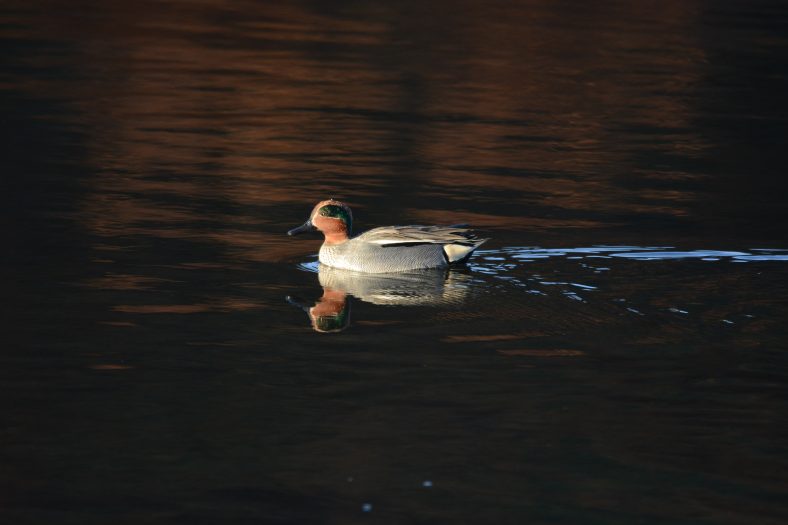 Wintering ducks such as Teal (pictured) find refuge along the Leitrim River, where they can be viewed from the iron bridge that carries the railway line. On a good day you can also spot twenty or more Little Grebes from this spot, particularly in the autumn. Photograph: Conor William O’Brien

Birds of the Estuary

Estuarine habitats are few and far between in County Wicklow. Broad Lough provides the largest and most productive of these for birds. The site is best known for its winter visitors but is also good during the migration periods in spring and autumn.

The estuary is fed by the River Vartry and is surrounded by saltmarsh, reedbed and scrub. The west side has limited shoreline access but can be reached via Tinakilly. There is a good view over the south basin from the R999 port road bridge, and the eastern shoreline can be walked from the industrial estate area as far as the north basin.

Approaching from the west (up the avenue to Tinakilly Country House) brings you through well-wooded farmland habitat where Buzzard, Kestrel, Yellowhammer, Bullfinch and Stock Dove can be found. Keep an eye out for Red Kite overhead. 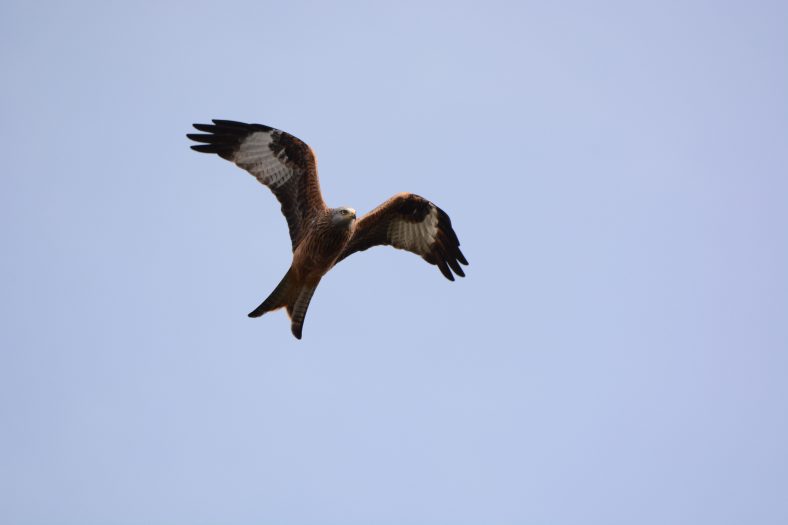 County Wicklow is at the centre of efforts to reintroduce the Red Kite to Ireland. These magnificent birds now regularly cast their long-tailed shadows over Broad Lough. Photograph: Conor William O’Brien

Following this narrow road down to the estuary, you will pass through an area of reedbeds where Water Rail can be heard squealing and Reed Warblers breed in summer. Some small layby areas are available for parking at the end of the road near Broad Lough House (private) and from here you can scan the estuary for gulls and waders and check the saltmarsh for Snipe, Jack Snipe, Rock Pipit and with luck, Water Pipit (a rare but seemingly regular winter visitor). The bridge over the small river here is a good place to look for Kingfisher, and a regularly returning Yellow-legged Gull favours the exposed shingle beds on the estuary. 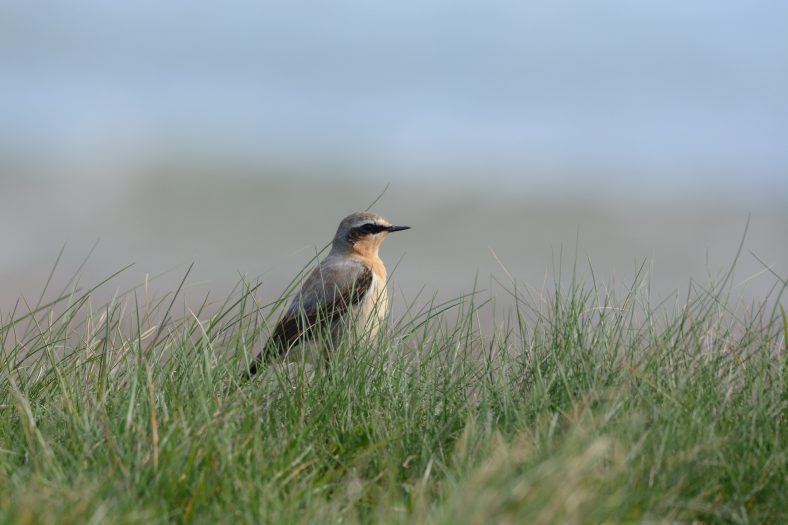 Wheatears can be seen along the Murrough at times of migration. Photograph: Conor William O’Brien

The south basin can be viewed from alongside Tinakilly Country House and from the port road bridge. Goldeneye and Long-tailed Duck are very scarce winter visitors to Wicklow but can sometimes be seen here, while rarities such as Smew and Red-necked Grebe have also occurred.

An evening gull roost is also present here, where Mediterranean Gulls can be found in small numbers.

The key to birding an estuary site  is timing your visit to coincide with a low or rising tide.

The reedbed and saltmarsh at Knockrobin, adjacent to the south basin, hosts roosting waders and wildfowl at high tide and is also a good place to look for hunting Hen Harriers and Merlins.

A walk along the east shore provides the best opportunity for views across the whole site. Park at the north end of the industrial estate road by the Veolia plant and walk in left (west) to find shoreline access where a wall goes into the lough. Look south from here for views over the south basin and then head north along the shore opposite Tinakilly, through ‘The Narrows’ and into the north basin for panoramic views over the most productive part of the site.

Check the gorse scrub on your right as you walk north for passerines like Linnet, Stonechat and Reed Bunting. 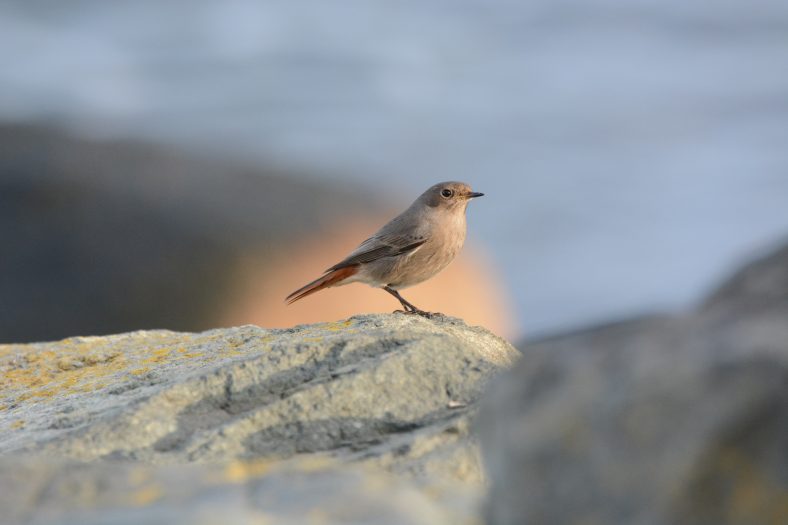 With luck, you will find rarities such as this Black Redstart along the sea-front. Photo: Conor William O’Brien

The key to birding an estuary site such as this is timing your visit to coincide with a low or rising tide. Predicting the tides and water levels at Broad Lough is not an exact science, however, as it is not properly in synchrony with the tide times for Wicklow Harbour. A tidal lag occurs here and heavy rainfall and spring tides can cause the site to remain flooded even when, in theory, it should be draining. A good bet is to visit in the hours after low tide to ensure some exposed mud is present.

Wigeons, Teals, Mallards, Shelducks and Mute Swans make up the bulk of wintering wildfowl here, along with small numbers of Shovelers and Light-bellied Brent Geese. Whooper Swan, Pintail and Gadwall are scarce visitors. Goosanders are sometimes recorded, presumably including birds coming down from the Wicklow uplands (where they breed) via the River Vartry.

Rare wildfowl such as American Wigeon and Garganey have occurred. Good numbers of Little Grebes are present at this site, with up to 50 birds on occasion.

Wader flocks on passage and in winter consist of the species Dunlin, Ringed Plover, Black-tailed Godwit, Redshank, Greenshank, Lapwing and Golden Plover. Species that prefer estuarine habitats, such as Bar-tailed Godwit and Grey Plover, also occur, albeit in small numbers.

The north basin is where most of the wader action can be seen, while Tinakilly and the Narrows are great places to look for Common Sandpiper, particularly in July and early August, when up to 20 birds can be found.

Broad Lough is perhaps best known among Irish birders as being a prime sight for seeing Ospreys.

Little Egrets are resident, but numbers swell in late summer and early autumn with the arrival of juveniles from nearby breeding colonies. As many as 80 birds can be seen between late July and mid-August. Rare waterbirds such as Crane, Spoonbill, Great White Egret, Bittern, Night Heron, Glossy Ibis and Cattle Egret have all been recorded over the years.

The site is generally good for birds of prey, with regular sightings of Peregrine in addition to those previously mentioned, plus the chance of a wintering Short-eared Owl, a migrant Marsh Harrier or Hobby over the reedbeds and the possibility of a wandering White-tailed Eagle from the reintroduction project showing up.

The River Vartry flows out of Broad Lough and through Wicklow Harbour, where it enters the Irish Sea. Mute Swans and Mallards are regularly fed by the public along the river at Parnell Bridge, which attracts a flock of gulls, with Iceland Gull having been recorded here. Around the harbour itself, Purple Sandpipers can be found in winter on exposed, wave-washed rocks. Perhaps the best place to look for these is between the east pier and the Black Castle. Rock Pipit is regular in this area also. 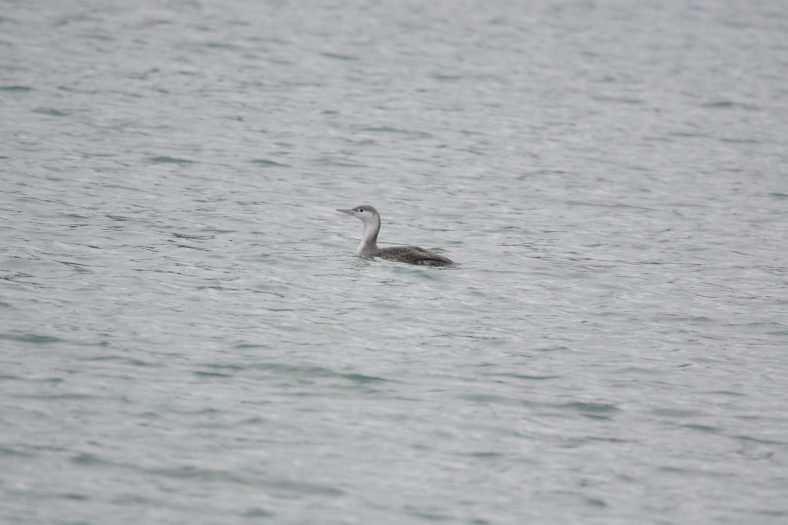 During winter storms, sizeable flocks of Little Gulls can occur off the mouth of the harbour as they come in from the Codling Bank for shelter. Triple-figure counts are possible when the conditions are right.

From the west pier, take the Murrough coastal path and head north, checking out to sea for Red-throated Diver, Great Northern Diver and Great Crested Grebe in winter.

A vagrant Franklin’s Gull was present along the shore here in March 2006. Keep an eye out for Black Redstart as you pass alongside the buildings and industrial areas adjacent to the path near the harbour; one or two birds regularly spend the winter in this area.

In spring and summer, the coastal dunes and grasslands along the Murrough support breeding Skylarks and Meadow Pipits, while Ringed Plovers and Oystercatchers nest on the beach. Close-range views of Little Terns and Sandwich Terns commuting along the shoreline can be had during this time of year, and Wheatears are regularly seen along the path and beach – a St Patrick’s Day walk is a good time to look for your first of the year. 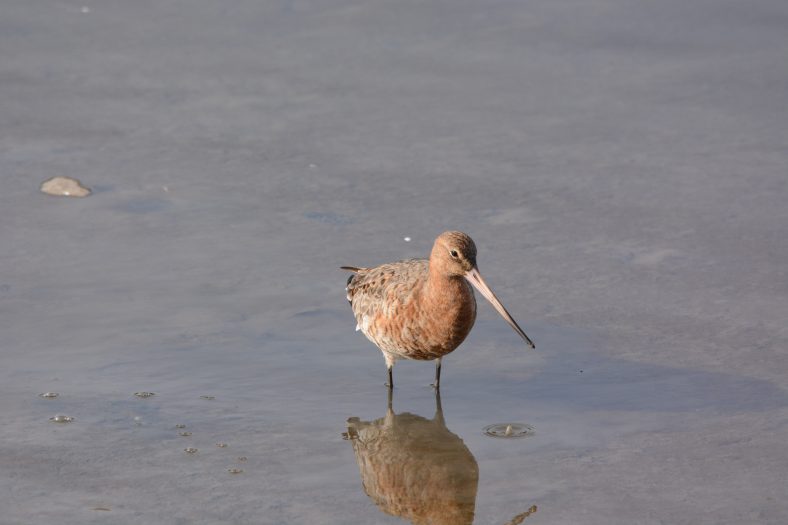 At low tide, the Leitrim River lays bare stretches of mud where Black-tailed Godwits (pictured) and Curlews feed. Catching the godwits at the tail end of winter can see them entering their stunning breeding finery. Photograph: Conor William O’Brien

The head is known to attract rare and scarce passage migrants.

The head is also suitable for seawatching and is known to attract rare and scarce passage migrants. Seawatching from the head during autumn (southeasterly winds best) has produced Great Shearwater, Cory’s Shearwater, Sooty Shearwater, Balearic Shearwater, Pomarine Skua and Long-tailed Skua over the years, but these are considered rare. Hundreds of Manx Shearwaters and a few Great Skuas or Arctic Skuas would be expected on a windy day in August or September. 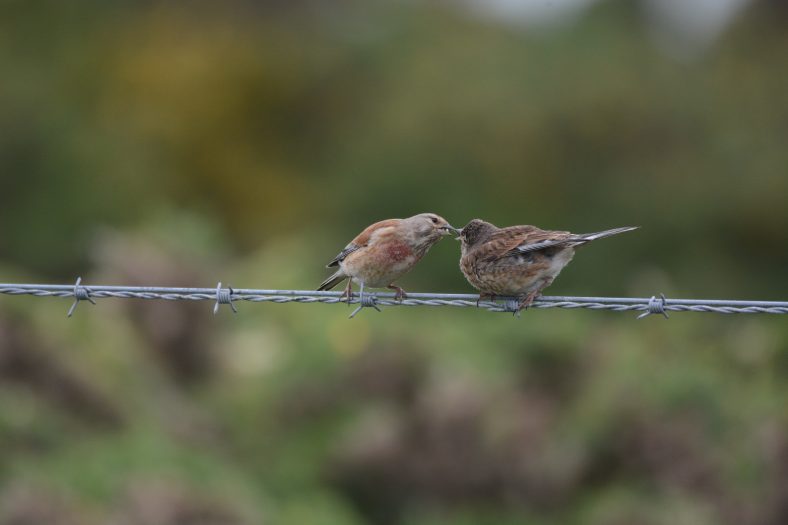 During the breeding season Linnets can be seen feeding their young along the barbed wire fence on the Murrough coast. Photograph: Conor William O’Brien

The sycamore trees along the road towards the headland, and the scrub gullies behind the lighthouse, should be checked for migrants in spring and autumn. Look for Willow Warbler, Chiffchaff, Wheatear and perhaps Spotted Flycatcher or a reeling Grasshopper Warbler. Vagrants that have turned up here in the past include Black-headed Bunting, Shore Lark, Bluethroat, Rose-coloured Starling and Red-backed Shrike. A Bittern was even seen flying out to sea off the head in October 2018! Scarce passage migrants such as Yellow-browed Warbler, Hobby, Pied Flycatcher, Lesser Whitethroat, Ring Ouzel and Whinchat have also been recorded. 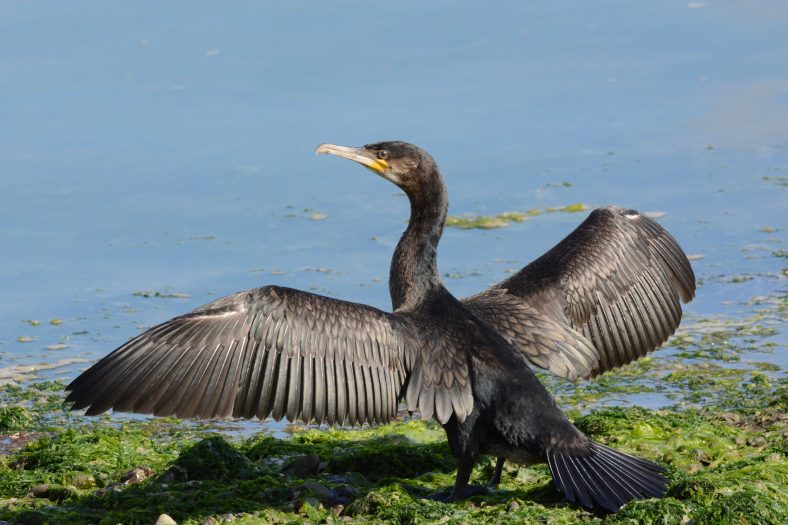 In Wicklow Harbour, where the Leitrim River flows into the Irish Sea, Cormorants (such as the above) hang their wings out to dry, while Grey Herons stand like sentries near the bridge. Photo: Conor William O’Brien

Wicklow Head might not seem as exciting a place to seawatch or to look for migrants when compared to south and west coast headlands, but the list of species that have been recorded here with relatively sparse coverage over the years suggests it would make a fine site for a dedicated local patch birder to turn up more.

This article appears in BirdwatchIreland’s quarterly members magazine ‘Wings’ in the Spring 2019 issue. Many thanks to the Wicklow branch of Birdwatch Ireland and  Conor William O’Brien, who kindly allowed us to reproduce the feature. Check out www.birdwatchireland.ie for more information about becoming a member or attending one of the many outings, activities and talks.