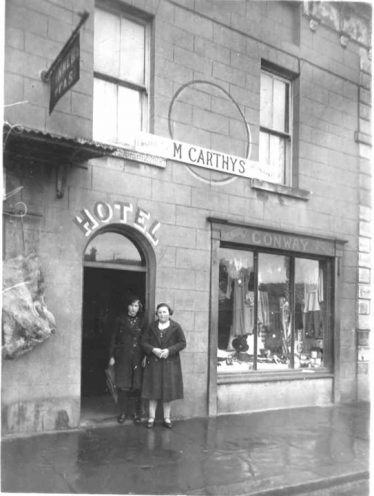 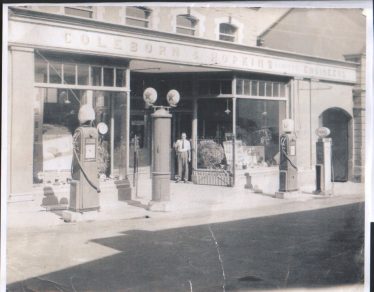 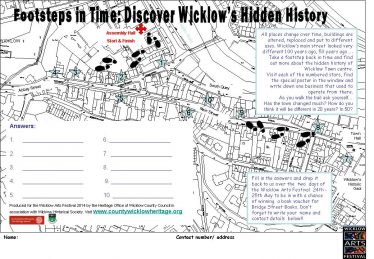 The idea of this project is to encourage us all to look for the hidden history in our everyday surroundings. This project was developed for the Wicklow Arts Festival 24-25th May 2014, with information provided by John Finlay and other members of the Wicklow Historical Society.

Designed as a treasure hunt, participants had to pick up a map and visit each of the 10 locations around Wicklow Town centre, read the poster in the shop window and write down what that building used to be.

This was a hugely  popular activity among young and old over the Arts Festival weekend and was a most enjoyable way of finding out more about the history on our doorsteps. The information from the trail is given below, and copies of the shop window posters and the trail map can be downloaded as pdfs.

Thanks is due to our ICAN partners in Ballinrobe, Co. Mayo for coming up with  Ballinrobe’s Pop Museum in vacant shop windows, an idea which we loved, copied and modified for our Footsteps project. If  other places in Wicklow are interested in doing something similar and would like to know more, please get in touch. This project along with the Viking Village and The Big Dig were all supported by Wicklow County Council and the Heritage Council in 2014 as actions of the County Wicklow Heritage Plan.

Halpin’s Cafe stands on the site of Fitzpatrick’s General Grocery Store and Boon’s Bakery. Arthur Fitzpatrick purchased the premises including the bakery in 1936. The bakery’s products were delivered to all the surrounding areas and proved vital in the supply of bread during the war years although the quality of the flour dictated that the bread became almost brown in appearance. In the early 1960’s the large city bread producers such as Boland’s, Brennan’s and Johnston, Mooney and O’Brien’s with their fleets of vans began to capture the market and Boon’s/Fitzpatrick’s Bakery closed its doors in 1964. Today some of the ovens from the bakery are still to be seen in Paul Smith’s Restaurant, ‘The Mystic Celt,’ in Church Street.

This building which faces the Halpin Monument in Fitzwilliam Square (The Smoothing Iron) stands on the site of Wicklow’s earliest cinema, ‘The Excelsior,’ which opened its doors in 1920 (formerly McCormack’s Seed and Grain Stores). It was later replaced in the late 1940’s by the ‘Rialto Cinema’ hence the name over the archway namely, ‘Rialto House.’ The cinema was owned by the Clarke Family from Rosanna, Rathnew.

These premises stand on the site of the Hibernian Bank which was taken over by the Bank of Ireland in 1958. The photograph was taken in 1932 and shows the bank with some of the decorations which adorned the town in celebration for the Eucharistic Congress which took place during that year.

This building stands on the site of Coleborn and Hopkins Garage which occupied the site for many years. It was a huge employer in the town and occupied the site presently taken up by the Abbey Street Car Park and the A.I.B. building with its car park. Today it would be unusual to have a large garage in a town’s Main Street as they are usually placed on the outskirts but this was not so unusual in the 1950’s/’60’s when motor traffic was much lighter than it is today.

If you look up towards the roof you can still see part of the decorative plasterwork of the building which previously stood on this site. It was the famous ‘Green Tree Hotel’ (see photograph) which closed its doors for the last time in the late 1950’s and had operated there since the late 19th century. The green tree which stood at its entrance and which led to its name was removed in 1929 as it had grown too large and the roots were interfering with the opening and locking of the door at the entrance. Owned by the Kavanagh Family, entrance was gained to this old coaching inn through the archway beside the E.B.S. and the stables for the horses were in the rear.

Stop 6: – Byrne’s Shop, on the corner of Morton’s Lane and Main Street

The building which occupied the site where Byrne’s shop presently stands was the Royal Bank of Ireland which stood on this corner for many years. The bank closed its doors in 1966 when itself and two other Irish banks amalgamated to become the Allied Irish Banks (A.I.B.). The other banks involved in the amalgamation were The Munster and Leinster Bank and the Provincial Bank of Ireland. Indeed if you look closely at the photograph you will see that prior to the Royal Bank the site was occupied in the early years of the 20th century by a butcher’s shop.

Ernie’s stands on the site which for over a century was both a general grocery and spirits store and a public house. Owned by the O’Brien Family (as can be seen from the photograph) this shop was reputed, in the mid 19th century, to rent out rooms to patrons who wished to have a clear unhindered view of the hangings/executions which took place at the front of Wicklow Gaol. Over the years O’Brien’s became ‘The Perriwinkle,’ and ‘The Old Court’, before becoming ‘Ernie’s.’

This property along with the adjoining ones were once part of one of Wicklow’s longest established hotels, namely ‘The Wicklow House Hotel.’ In operation from the early years of the 19th century another hotel, ‘The County Hotel,’ stood alongside. The most famous landlord’s were the Byrne family and the bar in the premises became known locally as ‘The Pole.’

This business centre/arcade containing Paddy Power Bookmakers, hair salon, Apache pizza restaurant and the Q Club Casino and Snooker Hall stands on the site of the ‘Old Tin Shed’/ Technical/Vocational School which was opened to students for the first time in 1905. It was supposed to be a ‘temporary’ home for the new ‘Tech’ but it was to remain in use, as a school, for almost 50 years until the new Technical School/Abbey Community College was opened in 1954. As soon as the building on the Lower Mall became available the County Wicklow Library Service re-opened the premises as a library. In the intervening years portions of the building was used as the Weights and Measures Office and the Social Welfare Office. Indeed at the back of the building and almost below street level the Marian Boy’s Club opened its doors in the mid 1950’s.

John Flood’s Menswear shop occupies the lower floor in one of Wicklow’s most impressive buildings namely the ‘Old Post Office.’ This unique three storey building, on Wicklow’s Main Street, was opened to the public in the late 1850’s, when the penny post became popular through the United Kingdom. Indeed, the bust over the main entrance is that of Rowland Hill, who introduced the penny black and penny red postage stamps into circulation in 1840. The ‘Old Post Office’ served the public of Wicklow until its business was transferred the the present Post Office on the Upper Mall in 1959.