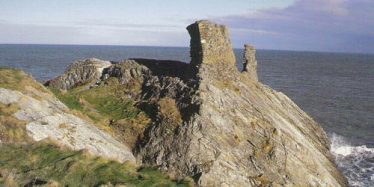 Tradition and folklore states that the site of the church of Mhantain, Wicklow’s patron saint, lies between the Courthouse in Wicklow Town and the corner of New Street and Main Street. A noted church historian and folklorist Fr. M’Inerney of Tara Street wrote in the early years of the 20th century that the famous Colgan paid a visit to the site and found it ‘so utterly erased, that sheep swine and other beasts took refuge therein.’ An addition of the Wicklow People newspaper from 1935 noted that when sewer pipes were being laid across the road from the front of Wicklow Gaol, large slab stones and the foundations of large buildings were uncovered. It is also known that the bodies of executed prisoners from Wicklow Gaol were interred here as it was known to be holy ground. At the corner of Main Street and New Street the remains of a Romanesque arched window were exposed during renovations and in a house a few doors away there is an old wall with ancient stonework in the backyard and an oral tradition of a bishop being buried there. Fr. M’inerney also stated that the ground under the Old Gaol was part of the cemetery attached to the church of Mhantain.

Mhantain was a follower of St. Patrick and was recorded as having travelled with him, until his time in what is now modern day Limerick. His original name is also lost in the mists of time but his legend at least survives. When St. Patrick and his followers attempted to land just off the ‘Paidin Rocks’ at the back of what is now the Old Pier, the locals gave him and his followers the traditional welcome afforded to tourists of the day. The boat was stoned from the beach by the natives living in the area. One of the followers of St. Patrick was struck in the mouth with a stone and lost his teeth as a result. The attempted landing was aborted and the boat pulled away to the north. The toothless and bloody mouthed victim of the stoning was christened ‘Mhantain.’ This translates as ‘Gubby’ or ‘Gap Toothed.’ This follower and St. Patrick were later to have a disagreement for which no resolution could be found and Mhantain was instructed by St. Patrick to go back to what is now modern day Wicklow and convert the locals. In folklore and tradition St. Patrick is supposed to have said to Mhantain ‘go back and convert the wicked low people there’ and that this is where the name Wicklow comes from. It is a nice story with no basis in fact. Wicklow is derived from two Scandanavian words with the second part ‘lo’ meaning meadow. Linguists disagree over the first part of the name. The noted linguist Magnus Oftedal states that the full name of Wicklow translates as ‘the bay of the meadows.’ This would have been the sight which greeted the Viking invaders coming into the area. The old Irish placename for Wicklow is Chill Mhantain which translates as the ‘church of gubby or gap toothed.’ Named after the man who established the first church in Wicklow Town. Fr. M’Inerney also wrote that a second church established on Church Hill, close to the settlement of the local pagan chieftan, subsumed the importance of Mhantain’s church in the area.