Wicklow Olympic athlete Peter O’Connor has been honoured in his home town when a plaque in his memory was unveiled  on Tuesday 22nd January 2019 on Ashtown Lane in Wicklow Town. 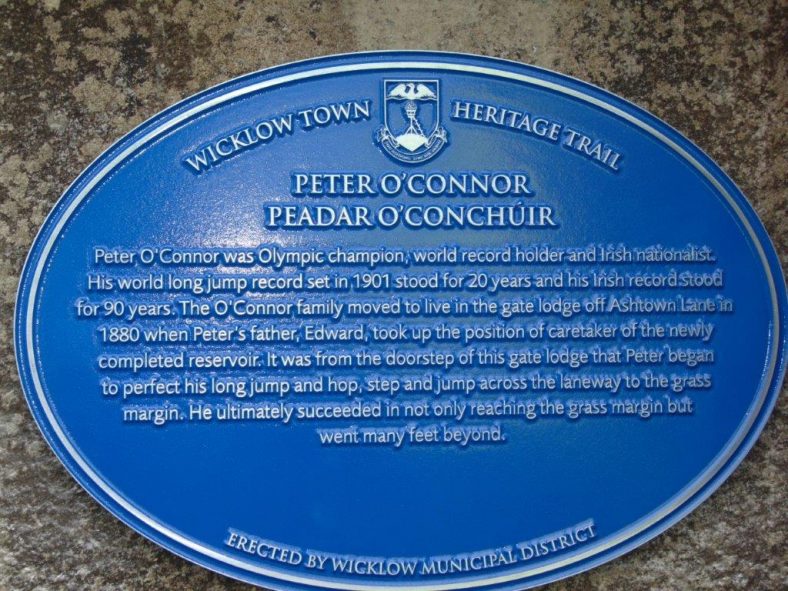 The inscription on the plaque reads;

Peter O Connor was an Olympic champion, a World Record holder and an Irish nationalist.  His world long jump record in 1901 stood for 20 years and his Irish record stood for 90 years. The O’Connor family moved to the gate lodge off Ashtown Lane in 1880 for Peter’s father Edward to take up the position of Caretaker of the newly completed reservoir.  It was from the doorstep of this gate lodge that Peter began to perfect his hop, step and jump across the laneway to the grass margin.  He ultimately succeeded in not only reaching the grass margin but went many feet beyond.

Speaking at the unveiling , Mr Frank Curran, Chief Executive, Wicklow County Council, said:  “This is a wonderful story of a man who was reared in Wicklow and who won two Olympic medals in the 1906 Intercalated Games in Athens and who not only held the Irish Long Jump record for 90 years but also held the world record for 20 years.”

He said it was only right and fitting that we pay tribute to him in Wicklow, particularly as he perfected his hop, step and jump from the doorstep of his family home in Ashtown Lane and which may have been instrumental in his Gold Medal win in Athens in 1906. 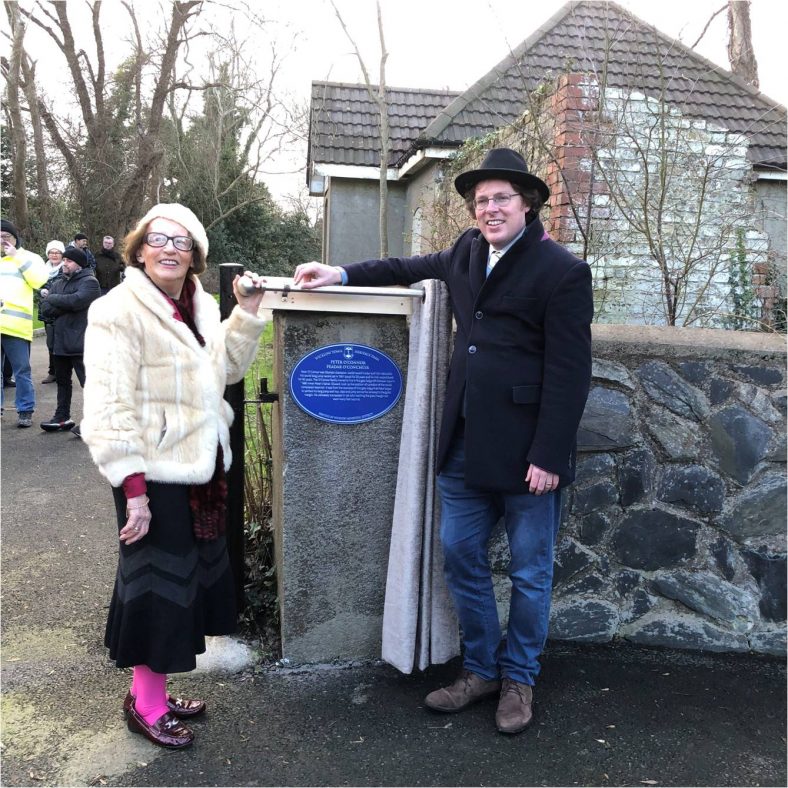 The plaque was unveiled by Peter’s great grandson, Mark Quin, who is author of the book, “The King of Spring”.

Peter’s father  Edward O’Connor was a skilled ship-wright.  He was commissioned to build the first maritime vessel (a schooner known as the Nellie Bywater) in a new shipyard in Millom in Cumberland, UK.  It was because of this commission that the family moved to Millom and it was here that Peter O’Connor was born on Wellington Street on the 24th October 1872.  His birth is registered in the district of Bottle in Cumberland. Soon after Peter’s birth the family moved back to Wicklow and Edward continued his trade for the next 7 years in Wicklow Town and up and down the Irish coast.

Times were changing and it was clear that the glorious era of merchant sailing ships was coming to an end and being replaced with steamships.  This lead to Edward exploring other possibilities of employment and it was then that the golden opportunity of taking up the position of caretaker of the newly constructed Reservoir on Ashtown Lane presented itself. The O’Connor family lived at the gate lodge off Ashtown Lane.

Peter was an accomplished athlete and competed in Gaelic Games across Ireland, winning his first All-Ireland Championship in 1899. In 1901, O’Connor set the world record in the long jump at the RDS in  Ballsbridge and soon became one of the most famous athletes in the world, with the American media dubbing him the ‘Irish Antelope’ .

O’Connor and two other Irish athletes, Con Leahy and John Daly were entered for the Intercalated Games in Athens in 1906 by the IAAA and GAA, representing Ireland. They were given green blazers and cap with a gold shamrock, and the green ‘Erin Go Bragh’ flag However, the rules of the games were changed so that only athletes nominated by National Olympic Committees were eligible. Ireland did not have an Olympic Committee, and the British Olympic Council claimed the three. On registering for the Games, O’Connor and his fellow-athletes found that they were listed as Great Britain, not Irish, team members.

Further controversy arose in the long jump competition where  O’Connor met Myer Prinstein who was competing for the U.S. team and whose world record O’Connor had broken five years previously. The only judge for the competition was Matthew Halpin, who was manager of the American team. O’Connor protested, fearing bias, but was overruled. He continued to protest Halpin’s decisions through the remainder of the competition. The distances were not announced until the end of the competition. When they were, Prinstein was declared the winner, with O’Connor in Silver Medal position.

The three Irishmen made an international protest, the first overtly political act of a modern Olympics.

When it when it came to the medal awards ceremony, the three Irishmen made an international protest, the first overtly political act of a modern Olympics.  Peter O’Connor scaled the 20ft pole and then unfurled a large green flag.  Green Flag Celtic Harp Erin go Bragh (Ireland Forever).  A crowd of almost 60,000 people looked on. The two other Irish athletes,  Con Leahy and John Daly stood guard at the base of the pole to prevent the Greek Military from preventing the unveiling of the flag. The Irishmen’s actions were a direct snub to Crown Prince George of Greece who had insisted that the Union Jack be raised should one of the three Irish athletes win a medal at the games.

In the Hop Step and Jump competition , held two days later, O Connor beat his fellow country-man Con Leahy to win the gold medal with a distance of 46’ 21/8”. At 34 he was the oldest ever gold medal winner in this event.

O’Connor won no more titles after 1906, however he remained involved in athletics all his life. He was a founder member and first Vice-President of Waterford Athletic Club, and attended later Olympics both as judge and spectator.

Back in Ireland, Peter had a lengthy legal career in Waterford with Peter O’Connor & Son Solicitors and was elected as Vice President of the Incorporated Law Society in 1932. He had nine Children, with his son – Peter O’Connor Jnr also a Solicitor with the practice. Peter of O’Connor Jnr had three  daughters – Rosemary, Hillary and Caroline. Mark Quin (who unveiled of the commemorative plaque in Wicklow Town) is the son of Rosemary and author of “The King of Spring”.  Mark is also an International Master of Chess and has represented Ireland at 5 Chess Olympiads (Russia, Armenia, Turkey, Slovenia and Dresden)

Quinn, M. 2005. ‘The King of Spring the life and times of Peter O’Connor’. Liffey Press