With the coming of the Anglo-Normans and the building of the Black Castle, the town proper began to take shape with the addition of a Main Street, possibly King’s Street and an offshoot of laneways. At the northern end of town the Franciscan Friary was built around 1265. 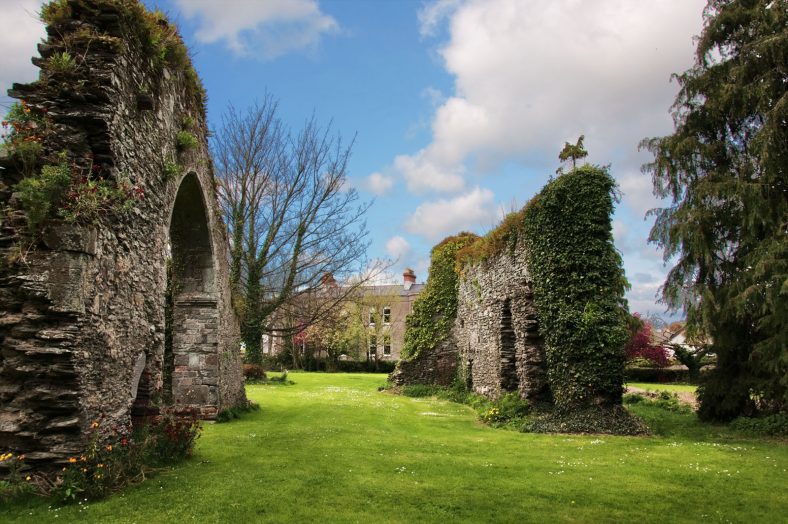 The monks were invited in by the Anglo-Norman Fitzgeralds, though it is also claimed that the friary was under the patronage of the O’ Byrnes and O’ Tooles. The foundation stone was blessed by the Bishop of Glendalough and the structure was mainly of limestone. The Abbey was under attack in 1301 and in 1314 but was reconstructed according to local Parish Priest and historian Fr. Kingston, “for Irish monks.”  In the reign of Edward the Sixth and in the year 1552, the King’s Emissary expelled the last Warden of the Abbey, Dermot O’ Moore. The Abbey was said to have the “poorest endowment” of any Abbey in Ireland, consisting of ten Irish acres of arable land with just one acre of meadow “from the Yew tree in Dr. Byrne’s garden, (1901) the grounds went up Friar’s Hill indicating that it was part of the Abbey. Whether the Oak Field belonged to the Abbey or parish it is hard to say.” Fr. Kingston recorded of the monks “The Conventual Franciscans were always extremely poor.” The Abbey included the land at Friar’s Hill and gives the origin to the name. 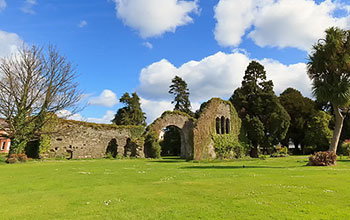 Henry Harrington took control of the Abbey Grounds in 1575 under the Queen’s Warrant for 21 years at a rent of £3-12-9d. By 1599 the Abbey grounds were a garrison quarters and arsenal for Harrington’s troops who wanted to crush the O’ Byrnes and the O’ Tooles. The Old English force was itself wiped out, routed and massacred in the vicinity of modern day Deputy’s Pass. One officer, Captain Loftus, made it back to the Black Castle, where he died of his wounds.The Abbey grounds were also used as a courthouse and gaol, but, it was highly insecure for holding prisoners. The Abbey was confiscated by the Crown in 1556 and ceased to be a place of worship from 1615. The monks did return for a time around 1635. Their stay was short as they were driven out by the outbreak of rebellion in 1641. The monks returned after some eighteen years but they did not stay for long. By the eighteenth century the Abbey grounds were abandoned. The coming of the Eaton family changed that and when the last of this family died, the grounds came back to the Catholic faith when Archdeacon Andrew O’ Toole moved in. He built the church now known as the Parochial Hall in 1795 and had to flee the town four years later in the aftermath of the 1798 rising. The Abbey grounds survived for over two hundred years since, despite Earl Fitzwilliam wishing to demolish the Parish Priest’s house while considering running a road through the grounds when Abbey Street was being widened in the late nineteenth century. Today, those who walk the grounds, stroll on the second floor of the old Abbey. There is a Romanesque arched window at grass level.