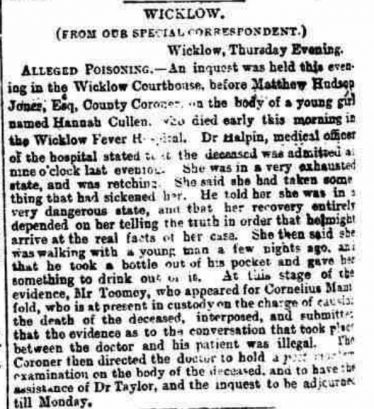 Hannah Cullen was an active, strong and healthy young woman.She was 22 years old and those who knew her had never heard her complaining of being unwell. Hannah worked as a general servant to Mrs Mary Byrne, who ran a drapery business in Wicklow town. When she had completed her duties in the house on May 10th 1874, Hannah asked Mrs Byrne for permission to go for a walk. Mrs Byrne consented to this. On Monday morning Hannah was in bed and feeling sick. On Tuesday there was little change in her condition, she asked Mrs Byrne for permission to lie down having attempted her chores. Shortly after she was up with a raging thirst, her insides felt as if they were on fire.She took the children for a walk but then felt that her limbs were shaking. On Wednesday morning Mrs Byrne could not find Hannah, usually she would be downstairs working. Hannah was in her bed, unable to move and complaining of an incredible thirst. Mrs Byrne could see that her condition had deteriorated. Hannah was helpless, in a lot of pain, and could not move. The local Nurse, Mary Jordan, was summoned and immediately advised that the doctor be called. She was then quickly moved to the Wicklow Fever Hospital. When she was being dressed it was noticed that she was enormously swollen in the stomach and chest areas. Hannah declared that she was dying and asked that her mother be sent for. Hannah died between six and seven o’clock on May 14th 1874. Doctors Halpin, Reynolds and Cameron would later swear at the murder trial held at the Spring Assizes, Wicklow town, on Monday March 21st 1875: ‘that the symptoms presented by Hannah Cullen were symptoms of poisoning beyond all doubt.’ It was asserted that the poison used was phosphorus, hence the yellow skin of the victim, phosphorus was a noted rat poison.

Upon investigation it was found that Hannah had purchased phosphorus paste on the Thursday before her death. Had she administered poison to herself? A young local man was soon identified as a suspect in the case and he was lodged in Wicklow Gaol. In the old fashioned sense of the word Hannah was on intimate terms for six to seven months previously with a man called Cornelius M.: ‘they were in the habit of walking together as who, what is commonly called courting are frequently seen. They had been seen together walking around the Abbey.’ Before Hannah died she implicated Mr. M. in a statement made in the hospital.  Mr. M. appeared at the Spring Assizes of 1875 charged with her murder. He was reported in the local paper as: ‘appearing to have considerably improved since his committal.’ Margaret Cullen was a cousin to Hannah and appeared as a witness, she swore that she was with Hannah in the Fever Hospital: ‘her body was greatly swollen and her eyes were turned in her head. I asked her what ailed her and she said she had been poisoned. ‘Winifred Godkin was a Nurse at the Fever Hospital, she testified that Hannah’s: ‘tongue was a smooth black, her lips appeared to be yellow with a purple shade.’Sub Inspector Smith brought Mr. M. to the hospital after Hannah was admitted and questioned the dying girl. Mr. M. said nothing. Fr. Quaide administered the last rites. Hannah made a statement and the Sub Inspector wrote down the details. Dr. Halpin when giving evidence stated that he could hardly feel a pulse. She told him she had a drink of something on the previous Sunday and had been sick since. He testified: ‘I came to the conclusion she had taken something noxious to her system. I did not give her any hope of recovery from first to last.’ He tried hard to counter the effects of the poison but did not succeed. Hannah then developed violent pains in her stomach and grew cold. Before becoming insensible and dying she had identified the accused. Dr. Halpin and Dr. Taylor performed the autopsy.

Her organs were healthy with the exception of her liver which was enlarged and lemon coloured. Her intestines looked somewhat inflammed. Dr. Halpin admitted: ‘I never saw a case of death by phosphorus before; there was only one in Ireland before that.’ Sub Inspector Smith of the Royal Irish Constabulary had gone to the hospital after speaking with Dr. Halpin, he testified: ‘I told her there was no hope of her recovery and to tell me the truth – I went to the room where Hannah was lying and told her I had arrested the prisoner.’ Smith then brought Mr. M. into the room and Hannah exclaimed: ‘that is Con M. that gave me the bottle!’ Mr. Purcell QC for the Crown then proposed to read the dying declaration and said of Hannah: ‘From the time she was brought to the hospital she believed herself to be dying, and immediately before the statement was taken down by Mr. Smith, he distinctly informed her in the presence of Dr. Halpin, and without contradiction on the part of the medical man, that there was no hope of her recovery.’ This was a central issue in the proceedings taken against Cornelius M. The Judge had to be sure and satisfied that in this case, the deceased made the declaration under the immediate conviction of immediate and inevitable death: ‘Such a declaration was admissable; but he (the Judge) was not satisfied that in this case the deceased was at the time the declaration was made, under such an impression.’ Without doubt Hannah was in great pain and had cried out several times that she was dying. People who are in severe pain do this, but Hannah had not done so in a manner which the judge could rule on. Had Hannah stated that she was aware of her imminent demise and was about to place herself in the hands of her maker, things would have turned out differently. As matters stood the Judge declared that he could not in all faith allow the declaration of Hannah Cullen into evidence. Hannah crying out in pain did not constitute a dying declaration.

The Crown case was immediately withdrawn as the statements made by Hannah constituted their only evidence. The Jury therefore acquitted Cornelius M. and he was discharged. Cases of poisoning proved to be a rarity in the Wicklow of the nineteenth century and poison is generally regarded as a method used mainly by females to kill their victims. Hannah had purchased the phosphorus paste. Did she do so at the request of the man she was on intimate terms with? Did Cornelius M. then take some of the paste and mix it into a drink? Did he then persuade the young woman he was stepping out with to drink the lethal concoction? If so, the question has to be asked, why? What was his motive? Only he knew the truth of the matter and he took his secrets to the grave, having escaped the hangmans’ noose on a point of law.