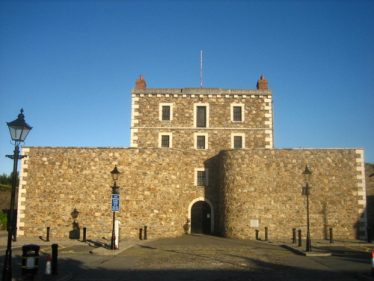 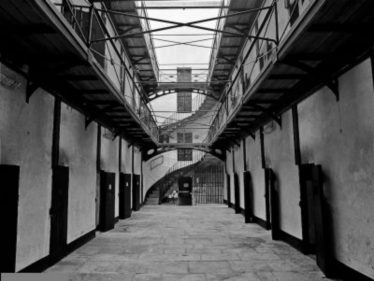 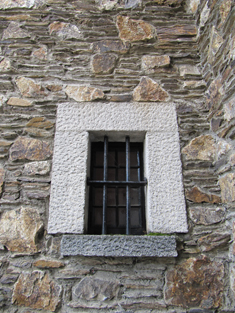 Wicklow Gaol was built in 1702 due to the fact that the older gaol in the Abbey Grounds was in a very bad condition and was not secure. The gentry of the period paid £5 each towards the new building.

Conditions were horrendous and harsh in the early years for prisoners such as Fr. Owen McFee, transported to the American colonies and a party of shipwrecked French sailors who became prisoners of war. They depended on the gaoler for food, heat, light, bedding and other comforts which were provided at a price. Most of the prisoners, except for the condemned men in the basement, were held in a large cell space which housed women, children, rapists, lunatics, highwaymen, footpads, thieves, robbers, burglars, untried murderers, rustlers, bad debtors, smugglers and villians of every hue and type. Those prisoners who had finished a sentence had to pay the gaoler a gratuity or ‘garnish’ to exit the gaol. Outlaws and escaped prisoners had a price on their heads and bounty hunters on their trail. The most famous of these was the infamous Hunter Gowan of Mt. Nebo, leader of the ‘Black Mob.’

It could only be hoped that the travelling hangman was efficient at his job or a slow lingering death resulted.

William Peters according to folklore was hanged for the sixth time in Wicklow Gaol, a notorious inter-county criminal, he bribed the hangmen who had the noose doctored lined and stuffed. He would then feign death by hanging and make a bid for freedom. His career came to a sudden end on the seventh occasion, in Naas, Co. Kildare, when he came across a hangman he was unable to bribe.

It was reported to the Grand Jury of Wicklow in the early years of the 19th century that gaolers were letting prisoners out to rob and murder about the county at night. They would then return to the gaol before dawn and would be well looked after for their troubles. The gaolers involved joined the criminals involved behind bars.

Transport To The Colonies

Transport to the colonies was in effect from the early days, first to the American Colonies and then New Holland. (Tasmania.) Other prisoners were sent to the East and West Indies. Life was harsh and sometimes short for transported convicts but there were those who did well for themselves after they had served their sentence. They carved out a civilisation from the wild frontiers for civilised settlers who would follow them. A person could be sent ‘over the seas’ for merely being homeless. Women up on a charge of ‘vagrancy’ were usually ladies of the night who continued to ply their trade in the new colony. Some of these ladies committed petty crimes which would earn them a short spell behind bars in the county lock up. This was done deliberately as they wanted to attend the gaol hospital for treatment of sexually transmitted diseases. Transportation continued up until 1856 and re-started in 1867 after the Fenian uprising. The youngest sent from Wicklow gaol was a child of twelve and the oldest was sixty.

The oldest convict to serve time in the gaol was a 100 years old woman, Ellen Doyle, sentenced to hard labour for begging. The most famous prisoners included William ‘Billy’ Byrne of Ballymanus, the 1798 rebel leader, Napper Tandy, co-founder of the Dublin Society of United Irishmen, (gaol prisoners started to fight each other for the privilage of cleaning his cell and making him tea,) and Erskine Childers, noted revolutionary, author of ‘The Riddle of the Sands’ and father of an Irish President of the same name.

With reform came sanitation, toilets, a laundry, education, religious and otherwise and the teaching of a trade. The wardens were double jobbers who also had to have a trade with which to teach the prisoners so that they could on release, lead a vice free and God fearing life, away from criminal influences. Branding and flogging punishments were replaced by isolation and hard labour.

The wardens earned £30 per year in the latter third of the 19th century with a free uniform and a new greatcoat every three years. They lived at Warden’s Row, a group of houses on the hill beside the gaol.

James Askins (Haskins) was the last prisoner to hang for murder in 1843. Others included two female highwaywomen in 1792, hanged from the front of the gaol and nine youths in 1820. Eight of these were hanged in pairs at two hour intervals. They had set off walking to Dublin in search of adventure, cheap gin and cheaper women in the dance halls of Dublin. On the way they had stolen from clothes lines when the nights were cold. Rewards were offered and bounty hunters were soon on the trail of the outlaws.

The gaol was also the Headquarters of the Cheshire and Lancashire Regiments in the War of Independence and housed Anti-Treaty Republicans in the Civil War before closing down in 1924. Prisoners have gone through and over the walls of the gaol to escape, they have also gone under the gaol to freedom and in the case of one particular youth in the early 1890s, merely walking out of the front door.