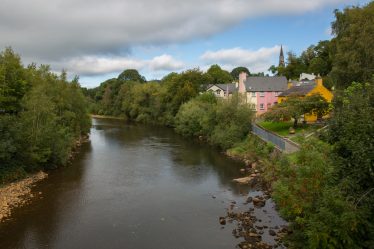 zoom
Avoca village sits beside the river of the same name

Avoca village dates primarily from the 19th century and its growth and development were influenced by the nearby mines. It stretches in linear fashion along the eastern bank of the Avoca river from the three-arch bridge, which was built in 1868, uphill to the Catholic Church of St. Mary & St. Patrick, constructed just six years beforehand. Further along the street is Avoca Mills complex. This was originally a corn and flour mill before become a noted site for hand weaving fine garments. The railway line came through Avoca in the 1860s and the station was located on the opposite bank of the river.

The origin of the name Avoca has been the subject of much discussion. The ancient Greek geographer Ptolemy included a river name ‘Oboca’ on his map of Ireland from the second century AD, which might infer that the name of the village and river is of extremely ancient origin. However, Avoca was known as Newbridge until the mid-19th century, and there are no references to the placename Avoca in Irish sources prior to then.

One of the best ways to explore the village and its surrounds is by taking the Red Kite walking trail, a  2.5km loop which ascends the forested high ground of Kilmagig Woods to the east of the village. The walk takes its name from a recent initiative to reintroduce the Red Kite to the area. The project commenced in 2009 and has been a great success; now this bird of prey can be regularly seen soaring in the skies above the valley.

The former courthouse in the village centre is a relatively modest building dating from around 1870, but it retains an important function today as a heritage and tourist information centre. Avoca was the location for the filming of the BBC television series Ballykissangel, which originally aired from 1996 to 2001. The village retains pride in its links with the popular show and this is reflected in the names of several local businesses.

After  the  three  Wynne  sisters  inherited  the  business  in  the  1920s,  they  introduced  colour  to  the  previously  plain  patterns.  Avoca  Handweavers  tweeds  was  produced  and  exported, including  for  use  by  Italian  designer  Elsa  Schiaparelli.  The  material  was  also  used  for  a  waistcoat  for  King  George  VI  and  baby  blankets  for  the  children  of  Queen  Elizabeth  II.