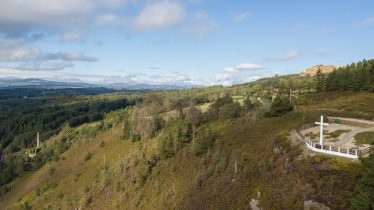 The earliest firm evidence of mining in the Avoca Valley comes from the 18th century, but it has been said that mining may have taken place here in prehistoric times. Some miners claim to have uncovered ancient implements, but conclusive evidence of prehistoric mining has been obliterated by later operations.

Avoca was the largest and longest-operating copper mine in Ireland and was worked from around 1720 to the 1980s. Mining took place at six separate locations within a one-mile radius; Avoca West, Tigroney East, Tigroney West, Cronebane, Conary and Shroughmore. The early large-scale mines here were run by English companies who provided the technical and engineering expertise, while the hard labour was carried out by locals. One unusual facet of the mines was that they produced their own coins, the Cronebane Penny, which were used to pay miners and which were accepted in local markets.

Work in the mines was notoriously difficult. Many of those employed there walked long distances each day to and from work. They then had to climb down hundreds of feet of wooden ladders to reach the bottom of the mines and were faced with a difficult ascent at the end of a hard days work.  Conditions underground were dark and cramped and flooding was a constant problem. It is said that up to 2,000 people were employed here at the height of production in the mid-19th century. Women and children formed an important part of the workforce.

The scale and significance of the mines here in the 19th century was such that the new railway line south from Dublin towards Wexford was diverted inland to facilitated transport of ore. Prior to that, the ore was transported on hundreds of horses and carts to the port at Arklow for export to Britain for smelting.

Avoca contains the most extensive collection of mining-related built heritage in Ireland. A considerable amount of the 19th century mining infrastructure remains in situ, including engine houses, chimney, tramways, adits and shafts. Advances in mining technology meant that much of the operations in the 20th century involved open cast mining which left large pits and spoils heaps behind.

The Miner’s Cross is a modern structure erected in the 1950s which is an important landmark and provides an excellent vantage point over the Avoca Valley. It commemorates all those who worked in the mines.