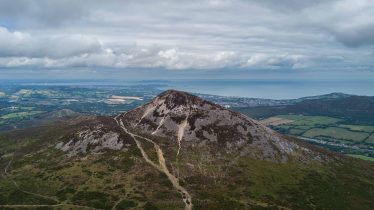 Great Sugar Loaf is the most distinctive of the trio of landmarks in north Wicklow that also includes the Little Sugar Loaf and Bray Head. It stands over 500 metres above sea level but it is often said that its conical profile exaggerates its height. Its name comes from the shape in which mounds of sugar were produced and sold up until the late 19th century. In Irish, the mountain is known as Ó Cualann, which derives from the ancient territory around north Wicklow and south Dublin in which it is situated.

Great Sugar Loaf is formed from Cambrian quartz and slate rocks of around 500 million years of age. During more recent periods of glaciation, when Wicklow was covered by a large ice sheet, constant freezing and thawing over thousands of years shattered the rocks on the mountainside. This formed the conical shape of the mountain and left the slopes scattered with loose and jagged rock fragments known as scree. The pale pink colour of these exposed rocks adds to the visual appeal of the mountain but makes the climb to the summit tricky. The mountain’s shape contrasts with the rounded summits of the Wicklow Mountains to the west, where softer granite rock was eroded by glacial action.

The summit of Great Sugar Loaf is a good place from which to view a number of glacial meltwater channels. These deep scars in the landscape were formed by torrents of water from melting ice at the end of the last Ice Age. The Glen of the Downs to the south-east, the Scalp to the north and the Rocky Valley to the north-west are three such examples of this feature. The Rocky Valley is also notable as a place where many fossils have been discovered.

On the northern spur of the mountain there are two prehistoric cairns of 7m and 15m diameter that area also visible from the summit. On a clear day, it is possible to see Snowdonia and other mountains in Wales from the top of the Sugar Loaf.

The mountain a significant amenity of cultural and natural heritage significance and continues to be a popular destination for walkers. The most commonly used route to the summit is from the car park on the southern slopes, but it is also possible to ascend from Kilmacanogue along the Sugar Loaf Way.