The Vale of Clara 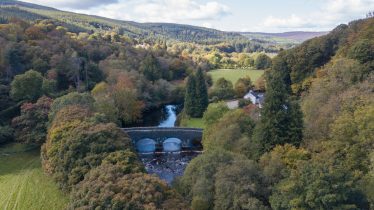 zoom
Clara Bridge is one of the oldest in Wicklow

County Wicklow is known for its many wonderful forest areas but few can rival the beauty of the Vale of Clara. Here the Avonmore River is flanked on either side by broadleaf and evergreen forests as it flows southwards between Laragh and Rathdrum. The Vale is particularly important as a place where old oak woodlands remain intact, particularly on the eastern bank of the river around Croneybyrne. Oak forests would have covered much of Wicklow in the past. This is one of the largest stands of hardwood trees in Ireland and some of the oak forests have stood here since the last Ice Age. Its ecological significance has been recognised by its designation as a Special Area of Conservation, which ensures the future preservation of this significant piece of natural heritage. The Avonmore Way walking trail provides visitors with an opportunity to stroll through the valley. The oak trees are interspersed with rowan, hazel and holly. A variety of birds are present, including less common species like the Jay, Long-eared Owl, Woodcock and Blackcap.

Nestled in the heart of the valley is the picturesque village of Clara. The six-arch stone bridge here dates from the late 17th century and is thought to be the oldest bridge in County Wicklow. The fact that the bridge is narrow and can carry just one lane of traffic is testament to its age. Archaeological excavations in 2014 uncovered evidence of a watermill 100 metres upstream of the bridge which was dated to the last decade of the 17th century. The Catholic Church of St Patrick and St Killian is adjacent to the bridge and was built in 1799. The school beside the church came a century later in 1899. Clara also had a post office, an inn and a shop, all of which are private residences today.

The Millennium Forest at Ballygannon at the southern end of the Vale of Clara just north of Rathdrum. This was one of a number of forest areas planted around 2000 as a part of a national nature conservation project. Over 40,000 oak seedlings were planted here to add to the existing old oak woodlands. The project ensures that the oak woodlands will continue to thrive here and provide a habitat for birds, animals and other plants, as well as a natural amenity for people.