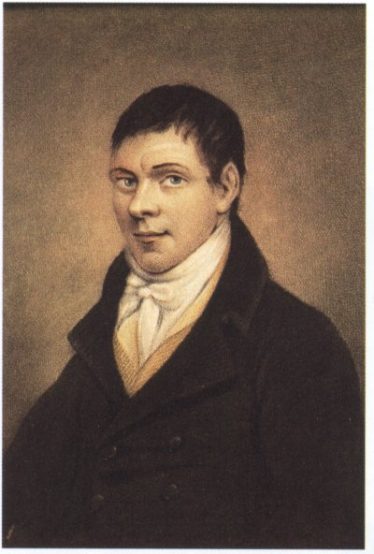 Born in 1772 in the Glen of Imaal, West Wicklow, Michael Dwyer is one of the most famous rebels of the 1798 period. It would appear that he had joined the United Irishmen as early as April 1797 when the movement spread to the west. Active in the movement, he was forced to go on the run prior to the outbreak of the Rebellion. He fought at both the Battle of Arklow and Vinegar Hill and led the rebels at the Battle of Hacketstown. With the retreat of the rebels into the Wicklow Mountains he was appointed ‘Governor of Glenmalure’. He did not agree with the plan to march into Meath and elected to stay to guard the wounded. On Holt’s return on the 16 July he joined the main rebel force.

By August General Moore was issuing amnesties but Dwyer was wary of accepting one as loyalists in his locality swore he would be killed if he returned home. Though the Rebellion was virtually over in a matter of some months, Dwyer along with a small band of loyal followers held out in the hills. He carried out a very successful campaign of guerrilla warfare, always managing to elude his pursuers such as the incident at Derrynamuck, where, with the help of Sam McAllister, he made a narrow escape.

Dwyer stayed for five years on the run in the hills. The Military Road and the barracks along its route were built in an attempt to capture Dwyer. This was the first purpose built road in Ireland.

With the failure of Emmet’s rising of 1803 pressure was increased to capture the elusive Dwyer. His usual haunts were guarded by the British and eventually in the winter of 1803 he surrendered to Mr. Hume, MP for Co. Wicklow. It was agreed that he and his four lieutenants would be pardoned and with their families be sent to America.

He remained in Kilmainham Gaol until 1805 when he was informed a week before sailing that he was being sent as a free man to the penal colonies of Australia and not America. He was devastated at this news and protested vociferously at this treatment, reminding the authorities of the terms of his surrender. It was in vain.

On 28 August 1805 Dwyer with his wife Mary, Hugh Vesty Byrne, his first cousin and his wife and children, Arthur Devlin, John Mernagh and Martin Burke left Cobh Harbour aboard the Tellicherry, arriving in Sydney in early 1806.

On arrival the men were each given 100 acres of land and they settled down into their new life. However, the Governor of New South Wales, Captain William Bligh of ‘Mutiny on the Bounty’ fame had the five men charged with seditious activities and though cleared of the charges in court, Bligh had them re-arrested and sent to various convict depots, including Norfolk Island and Van Diemen’s Land. Bligh was eventually removed from office by the military in the Rum Rebellion. Dwyer and his men were released and pardoned. The families returned to their farms at Liverpool, near Sydney and settled down to a life of farming.

Dwyer was persuaded by Governor Lachlan Macquarie to take a position as a constable in the district. He held this position for some time until he was eventually removed from office for misconduct. He opened a tavern, but this venture brought him financial problems. On leaving Ireland it had been decided that their four children would not accompany them but that they would follow at a later date.

Michael Dwyer died on 23 August 1825, aged 53. His four children arrived one week after his death. He was buried in Devonshire Street cemetery but was later moved to Waverley Cemetery and in 1898 a monument was erected over his grave to commemorate the ‘Wicklow Chieftain’. It is reported that over 200,000 attended the unveiling of the monument. It is the largest memorial to an individual in New South Wales.