You are here: HomenextTopicsnext1798 IN COUNTY WICKLOWnextThe 1798 Rebellion in County Wicklow

The 1798 Rebellion in County Wicklow 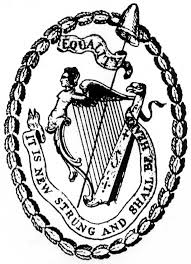 zoom
Symbol of the Society of United Irishmen

Why was the 1798 Rebellion so ferocious in County Wicklow?

There is no one answer to this question. County Wicklow experienced some of the most ferocious fighting during 1798 and was to remain disturbed long after the Rebellion had ended in the rest of the country. There was an enormous loss of life, destruction of property and business and large scale transportation of rebels to the penal colonies of New South Wales. Indeed, the counties of Wicklow and Wexford stood apart from the rest of the country in terms of systematic house burning. According to one observer ‘there wasn’t a good house left standing in the county after 1798…..’

The form and character of the Rebellion as it manifested itself in Wicklow has long puzzled historians. Wicklow’s anomaly lies in the fact that previous to the Rebellion, the county was considered to be one of the most prosperous, stable and relatively quiet regions in the country. It had the most successful Protestant settlement outside Ulster and a landed establishment of marked liberalism.

The fact that Wicklow had the largest Protestant settlement outside Ulster is an important factor in how the Rebellion manifested itself in the county. Indeed it is probably the main reason why the Rebellion in Wicklow and Wexford contrasted so strikingly with the rest of the country in terms of its bitterness and ferocity.

The politics of Wicklow in the 1790s – Wicklow’s liberal establishment

County Wicklow had the distinction of possessing a powerful liberal establishment both before and after the Rebellion. The county’s landed families have been described as tolerant and enlightened and there seems to have been a higher degree of affinity between landlord and tenant as landlords were mainly resident in the county.

Many of Wicklow’s landed families were opposed to the traditional establishment in Irish politics and were supporters of parliamentary reform. No doubt many were influenced by the flow of ideas from Europe in terms of the enlightenment and later the French Revolution. The liberal politics of the county were all too evident in the general elections of 1770 and 1797. Wicklow returned two liberal or Whig candidates to parliament, William Hume and Nicholas Westby, both of West Wicklow. The authorities at Dublin Castle mistrusted the Wicklow magistrates who they felt were not fully committed at dealing with disaffection in the county.

Wicklow’s economy was growing steadily in the 1790s. Industries contributing to this growth were mining, textiles, wool and forestry. Apart from possessing one of the strongest Anglican communities, a large proportion of Protestant labour was imported to work the mines and manufacture flax and linen. It follows that there was a relatively high degree of contact between Protestant and Catholic on a day to day basis, unlike other counties where Protestant settlements tended to be in more isolated pockets.

The growing economy and population meant that there was more room for mobility within the county. Lesser gentry and rising middle class families competed ferociously for financial resources and social position. Aggravating existing tensions still further were the Catholic families within this group who were themselves struggling both socially and economically. As Louis Cullen put it, ‘social rivalry was thus further bedevilled by religious distinction’.

It was a great deal more difficult for two groups living in such close contact to resist sectarian tension and then fears as they reverberated from other parts of the country. Membership of the United Irishmen and the Orange Order were high. Provocative behaviour prior to the Rebellion and the social rivalry in general, added to the sharp divide which existed in the landed establishment of the county and contributed to the tensions which erupted so ferociously in the summer of 1798.

The Byrnes of Ballymanus, from whom the rebel leader Billy Byrne emerged, was the only Catholic family to maintain a social position in Wicklow. Their influence within the county was formidable and they also possessed strong bonds of kinship and marriage with neighbouring counties.

Family pride and ambition was strong and further strengthened by the successes of their kin, both in Dublin and on the Continent. Along with many rising middle class and lesser gentry families of Wicklow, Catholic and Protestant, the Byrnes of Ballymanus were long identified as opposing the county’s pro-government faction.

The strong ties which existed between middle class Catholic families in Wicklow and Wexford coupled with their United Irish involvement meant that they were destined to play a significant part in the impending Rebellion.

Pacifying Wicklow – The Government’s Law and Order policy for Wicklow

In the months before the Rebellion the government launched in Wicklow one of the most brutal and severe campaigns of repression experienced in the country. Identified as a county with a large number of disaffected persons, the Castle was worried about the threat of its proximity to Dublin and did not trust the county’s magistrates, whose loyalty they questioned, to deal with the threat internally.

In late 1797 extra militia units from Antrim and North Cork were posted to Wicklow to boost existing militia and yeomen forces in the county. By April 1798 torture, flogging, pitch capping, half hanging and in some cases execution were common. Maltreatment of suspects, however, flimsy the charge was the norm. Indeed, these measures provoked terror and rage among the people and combined with already existing tensions, helped to push the county into rebellion.

Government forces in 1798 – The Military in Wicklow

These were regular, professional soldiers, brought mainly from England. There were few regular troops fighting in Wicklow during the Rebellion, many of whom were occupied in Europe.

This was a defence force conscripted from ordinary Irish men. The bulk of the troops were Catholic with Protestant officers. They were rarely used within their own home county. Militia units from North Cork, Antrim, Tyrone, Cavan, Fermanagh, Leitrim, Sligo and Dublin City were used in Wicklow in 1798. The notorious North Cork Militia was famous for their harsh method in repressing the rebels and is credited with the invention of the pitch cap.

The yeomanry system was created in October 1796. Landlords, in their capacity as magistrates were called upon to raise infantry and cavalry from tenants whom they believed to be loyal. Growing Protestant fears about the loyalty of Catholic yeomanry resulted in many Catholic expulsions prior to the Rebellion. The yeomanry, cited as being responsible for many misdeeds, were known for their lack of training and discipline. Contemporary reports described their behaviour as being out of control on occasion and many were said to have used the Rebellion to settle old scores with their neighbours.

Fencible Regiments present in Wicklow during the Rebellion were usually from Britain. They were militia permitted to serve outside their country. Regiments such as the Ancient Britons, the Durham Fencibles were raised for specific campaigns and often lacked the discipline of regular soldiers.

The United Irishmen in County Wicklow

From 1796 onwards membership of the United Irishmen increased rapidly among the people of Wicklow and Wexford. This expansion was mainly due to emissaries sent out from the organisation’s radical wing in Dublin.

The constraints of geography meant that the county was split into several distinct groups or divisions of United Irishmen. The strength of this kind of regional organisation lay in that effective use could be made of cross border alliances such as that of south Wicklow and north Wexford. Also, each division could act independently of the other if necessary.

A significant number of Wicklow’s Protestant gentry families were deeply involved in the United Irishmen from the beginning of the organisation in the county. Apart from their opposition to the traditional Protestant landed establishment of the county, these families often had close personal links within the locality and with Catholic families elsewhere. Indeed, Wicklow Catholics were relatively late in joining the organisation in large numbers, unlike Ulster where Catholics were active from the outset. This had a lot to do with the lack of a significant Catholic middle class in the county and also the liberal character of the gentry themselves.

The government’s harsh law and order drive carried out by a brutal military force in the months before the Rebellion did much to weaken the rebel organisation in Wicklow. With many of their leaders arrested, exiled or executed and the bulk of their arms confiscated, the Wicklow United Irishmen were short on morale and even shorter on effective direction. Indeed, a peasant, farmer or fisherman stood little chance against a trained, experienced well armed soldier. It is no wonder that rebel casualties in 1798 utterly out weighted losses on the government side.

It must be said, however, that what rebels lacked in training, many made up for in determination, courage and endurance. There are many accounts of the tenacity of the Wicklow rebels whose extreme militancy endured long after the Rebellion had ended in the rest of the country.