You are here: HomenextTopicsnext1798 IN COUNTY WICKLOWnextThe Terrors of Westmeath

The Terrors of Westmeath 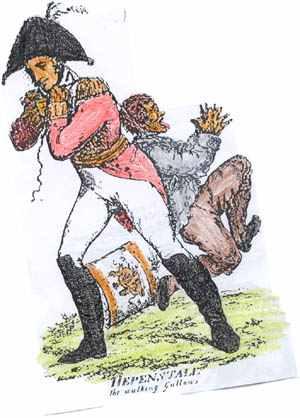 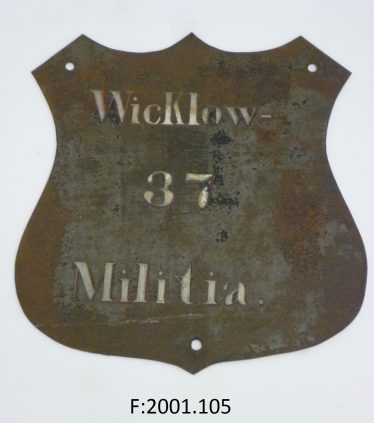 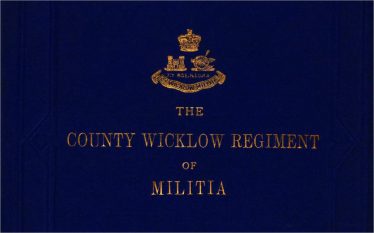 In 1793 The Militia Act was passed in the Irish Parliament due to the threat of invasion and the state of the country which was disturbed. It was to be a respectable force, commanded by respectable men. In most of the regiments created however, discipline was a bone of contention, and a charged atmosphere was to be felt within the ranks.

The Wicklow regiment was the 37th to be established and it was soon to become notorious in Westmeath. Sectarian strife in south Ulster and Armagh, saw the founding of a counter-terror group to the ‘peep o’ day boys,’ these were the Defenders, and their influence spread countrywide. The activities of the Society of United Irishmen, outlawed since 1794, combined with that of the Defenders, and the ever present threat from France, meant that harsh measures were to be employed to pacify the country. The Militia were created due to the unavailability of regular troops to meet the ever growing threat to the establishment. By order of Dublin Castle, they were not to see service within two counties of their own home county; this was an attempt to wipe out sedition and disaffection within the ranks.

The Wicklow Militia caused affront and outrage in Strabane by advertising for virtuous young girls aged 14-18 years for the Officers Mess, whilst headquartered there.

When they marched into Mullingar in 1797, they set about gaining a reputation for the pacification of Westmeath, a reputation which is still remembered in many areas of the county to this day. At Ballingore, houses were burned and suspects shot dead. Westmeath was a staunch Defender heartland and men involved were also under the influence of the United Irishmen, they were ‘up and up.’ At Multyfarnham a detachment of the Wicklow Militia was deployed to root out sedition and those who were disaffected.

They carried out their orders with deadly effect. A sunset curfew was imposed which was ignored by the locals, but only for the first night. Houses were burned the next day and on two separate occasions men were shot dead when attempting to escape after being taken prisoner. It was little wonder that men would afterwards take to their heels at the approach of a detachment of the Wicklow Militia. A raid was also mounted upon the home of a man who was long suspected as a committee man and local leader, William Dodd. Dodd was a local distiller and was absent from home when the Wicklow Militia came calling to his property.

Sergeant Douglas had been ordered to take Dodd prisoner, so in the light of the recent fatal consequences of arrest at the hands of the Wicklow Militia, it was perhaps divine providence that Dodd was absent, at least he lived. An instant example had to be made, despite the pitiful cries of the adult female and young children; much of the property was consigned to flames. Dodd, on his return, turned himself in to the authorities, to find no charges made against him. His troubles were only beginning. What was not burned was seized by the Excise man, and his creditors came calling. Dodd ended up in Debtors Gaol and failed in his bid for compensation, despite a court case involving the Wicklow Militia commander.

A notice was posted in the area demanding the surrender of stolen arms and threatened dire consequences if the order was ignored. The locals, well aware that the Militia were capable of just about anything, handed in a considerable store of weapons, some which were their own personal property. Where the Wicklow Militia were concerned, it was better to not possess anything which bore close resemblance to a weapon. The local commander was delighted with the results. The local Yeomanry corps had proved ineffective at the pacification of Multyfarnham, it was clear that the military solution was the only solution.

At Ballymore the Wicklow Militia struck great terror into the hearts of the locals, it was obvious to the local gentry that many would be dissenters were rendered immediately repentant. Ballymore and Myvore were areas of notorious Defender activity, and it was this which brought the Wicklow Militia into their midst. The inhabitants were about to encounter a veritable monster of depravity in the form of Lieutenant Edward Hempenstall. He can be judged as a capable hangman or a rotten half-hangman. Hempenstall liked to throw a suspect over his shoulder, with a rope around the neck of his hapless victim, and stroll about with him. Half-hanging was done in a bid to elicit information from the victim when he was revived. If no answer was forthcoming, the Lieutenant would take another stroll with his burden. Many of the Lieutenant’s prey died as a result of his attempts at gaining information. This earned him the title of ‘The Walking Gallows.’ He features in folklore and legend in many counties, and it is said no grass grows over his grave.

Hempenstall murdered three members of the one family at Myvore, and burned their property. He was later responsible for the arson attack mounted on almost all the houses in the village. Moving on to Ballymore which was in the process of enjoying the fair day, Hempenstall ordered his men to shoot three prisoners, and he later participated in the death of a fourth man. Many men were left severely wounded before the Wicklow Militia left the village. They were described as ‘ruthless’ in their search for arms and the disaffected who owned them. The Wicklow Militia truly became the terrors of Westmeath, but they saw service in other counties also, including their own county, proving the only militia to ever do so.

When their service ended, the Grand Jury of Westmeath presented the Wicklow Militia with plate valued at 50 guineas for the regiment, and 200 guineas for the non-commissioned officers and soldiers. They requested that the guineas be made into gold and silver medallions. Some can be seen in the National museum today. It was ironic that the money for the presentations came from the tax collections, some from the very people who had been oppressed by the Wicklow Militia, who then transferred to Kilkenny.

Lieutenant Hempenstall brought terror to Kilkea Castle in April of 1798. The quest to pacify the country had intensified and an armed revolt was imminent. The ‘Walking Gallows’ who had burned, shot and sabred many men to death took great pleasure in the flogging and torture which was carried on in the Castle, in a bid to elicit information. He was eager to participate. Later on in the year, in a very public display, at a packed Crow Street Theatre, Hempenstall was to earn his awful nickname, as he put on a display of half-hanging. Within a few years, he too, was dead, nothing but the hated memory remained.

Just before the outbreak of the 1798 rebellion, in the village of Dunlavin, a large number of prisoners were taken from the guardhouse, lined up and tied on the village green, and executed.

This was an atrocity which would enter folklore and legend, and members of the Wicklow Militia had taken part. West Wicklow was a troubled area before the outbreak of the rebellion, they were tension filled days. A light infantry company of the Wicklow Militia under the command of Captain Edward Richardson was involved in the pacification of the area.

He and his men had taken part in the mass flogging of upwards of fifty men suspected of being involved with the United Irishmen. As the rebellion was underway, some 36 men were held prisoner in the guardhouse at Dunlavin. Included were compromised members of the Saundersgrove and Narraghmore Yeomanry Corps, local farmers, natives and a relative of the rebel leader Michael Dwyer. The men were marched down from the Market House to the Fair Green, tied together, and executed. Some of the disgraced Yeomen had been escorted to Dunlavin, after arrest, by members of the Wicklow Militia. Other known disaffected and arrested Yeomen had been escorted to Naas Gaol by Wicklow Militiamen, and were badly flogged and abused upon arrival. On the Fair Green, amongst 35 dead bodies, one man, badly wounded, remained breathing. Mr. Prendergast managed to crawl away after the execution party had departed. He survived and gained his health, dying in 1842.

When a rebel attack was later mounted upon Dunlavin, the Yeomen of Dunlavin, Hacketstown and Baltinglass, found that the members of the Wicklow Militia who helped repulse the 300 odd rebels involved, to be as brave as they were brutal. Those who surrendered or were captured after being wounded were treated leniently, a somewhat surprising occurrence, considering the presence of the Wicklow Militia.

The terrors of Westmeath, had flogged, shot, cut, hung and burned their way to notoriety, and were responsible for consigning some five hundred homes to the flames in that county.

They are also remembered for their brutality in many other counties, the most enduring of the legends surrounding the regiment, center upon just one man, Lt. Edward Hempenstall, of whom it was said, he could recognise a seditious and disaffected man, merely by looking into his eyes. The ‘Walking Gallows’ suffered a particularly hard death, in a shocking distemper, seeing visions and foul vistas of hell, enduring the torments of the damned, and having his body consumed by vermin, dying in a raging fever which lasted three weeks. Some who remembered him after his death would conjure up a picture of him irradiant in cloven feet, horns and a long tail and it was said: ‘no spirit could do the infernal business better than his.’

Footnote: Information for this article was sourced in “An outline of the history of the County Wicklow Regiment of militia” by Edward Benjamin Evans. (This book is part of the collection held by the Bodleian Libraries and scanned by Google, Inc. for the Google Books Library Project, click here to download