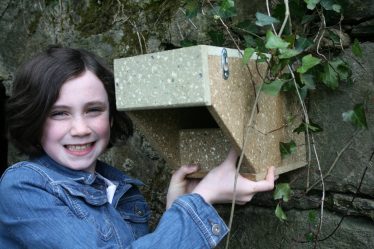 zoom
One of the artificial nesting boxes which are proving popular with Dippers. BWI

The Irish Dipper is one of only four recognised subspecies (races) of bird unique to Ireland (the others being Red Grouse, Coal Tit and Jay). It is on the Green List, with a stable population. Nevertheless, it is an excellent indicator for the quality of water in our upland streams and rivers.

As part of an intensive ecological survey of bridges and culverts in Co. Wicklow in 2012 organised by Wicklow County Council, and co-funded by The Heritage Council, BirdWatch Ireland surveyed bridges for Dippers and other birds. Out of a total of 109 bridges surveyed, 25 had Dippers nesting at them. Many studies, including this one, have shown that bridges are very important for Dippers, both for breeding in the summer and roosting in the winter, as well as for other wildlife. This work identified a number of priority sites where conservation work, putting up special Dipper nest boxes, could be undertaken. These priority sites were bridges where the river habitats were perfect for Dippers, but that didn’t offer any nesting locations for the birds. A total of 11 boxes were put up during 2013, with more up (and planned to go up) in 2014.

The nest boxes themselves are worthy of mention, as they are made using boards fabricated from recycled car seats! Dippers build a large “domed” nest of moss, but will readily utilise crevices or holes in stonework under bridges. The nest entrance is always over running water, and nest are often located in banks or in branches over-hanging the river where there are no suitable bridge sites, where they are very susceptible to flooding and predation. The nest boxes are located above any risk of flooding and out of the reach of predators, to improve the chances of the Dippers successfully fledging chicks.

Amazingly, early surveys indicate that eight out of the eleven the nest boxes already in place are being used by Dippers. Dr. Alex Copland, a Senior Conservation Officer with BirdWatch Ireland, undertook the bridge survey and put up the Dipper boxes. “We recently had some success with nest boxes at our Midlands study site, where we’ve been monitoring the Dipper populations for over ten years” he said. “We hoped they would work here as well, and the results are brilliant. It’s great to see conservation work in action and delivering results, and great to get such strong support from Wicklow County Council.”

This project followed on from a study which also looked at improving the prospects of migrating fish in our rivers by identifying and resolving obstacles where they occur. The council, through the County Heritage and County Biodiversity Plans, is working in partnership with organisations such as Birdwatch Ireland, Inland Fisheries Ireland and National Parks and Wildlife Service on an ongoing basis to enhance the biodiversity of County Wicklow. For more information about the Wicklow Bridges Project read the article Wildlife in Wicklow Bridges on this site