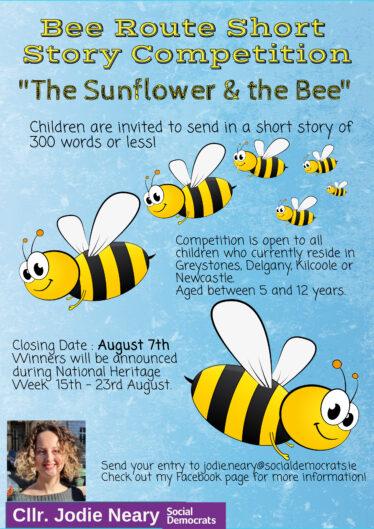 The Sunflower and the Bee children’s short story competition is a follow on to Cllr. Jodie Neary’s Bee Route Project for National Biodiversity Week 2020. Children were  invited  to submit their stories and these are announced here as  a Heritage Project during Heritage Week .

“Polly the bee lived in a bee hive in county Wicklow. One day she went for a fly around the beaches of Greystones and got lost. Something caught her eye and it was four beautiful sunflowers that no other bee had visited before, as they had only just opened. The little garden that Polly had landed in belonged to a little girl called Siena Maple. Siena would wake up every morning and run in her pyjamas outside to say hello to the plants. Siena’s veggie and fruit garden was right under her bedroom window on the ground floor, so sometimes she even hopped out the window to get there quicker. It made her feel nice and lovely to start every day with her plants. Polly was delighted to see that there were so many other pots and boxes with flowers and herbs. Polly especially loved the wild flowers that came up from the flower bombs that Siena had planted 3 months earlier. There were pink, dainty flowers, ones with vivid blue petals and violet ones. Some were in full bloom, some had already gone to seed and others were yet to flower. Polly thought that she had landed in bee paradise and she wanted to tell all of her family about it. First she decided to collect lots of lovely nectar and fill her pollen baskets on her legs. She got so much that she flap her wings twice as hard to get home. She actually had to flap them 200 times per second! Can you imagine how tired she must have been? Thankfully she found her way home as bees have this amazing navigation system. They can smell their hive from miles away and this means they always find their way home.”