By the middle of the 12th century many of the Viking towns, such as Dublin and Wexford, as well as the Irish ruling families, had made strong trade and political links with England, and also with mainland Europe.  One of the Irish rulers was Diarmait MacMorrough, king of Leinster.

The lands that now form the county of Wicklow were ruled by a number of smaller ruling families, who were all answerable to Diarmait MacMorrough as king of Leinster.  An example of the links that Diarmait MacMorrough had made with Britain and mainland Europe can be found in Baltinglass where he founded a Cistercian abbey in 1148.  The Cistercian order of monks had its origins in France some years before, and Baltinglass was the second Cistercian Abbey to be founded in Ireland. 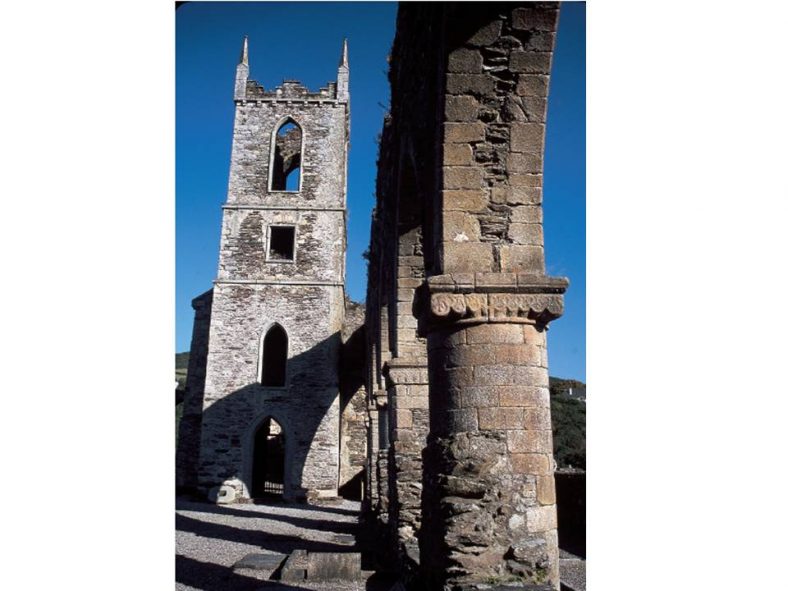 In the year 1166 Diarmait MacMorrough was forced to resign as king of Leinster, by the high king of Ireland, Rory O’Conor of Connaught.  As a result, Diarmait went into exile in England.  However, he was not willing to give up his title as king of Leinster without a fight.  While in England he convinced several Norman knights to accompany him back to Ireland and assist him in winning back the kingship of Leinster.  He achieved this in 1167 with the aid of a small band of Welsh and Flemish knights.  Over the next few years further numbers of Normans continued to arrive and Diamait MacMorrough’s strength grew, until finally, in August 1170, some 200 armoured knights and 1000 men at arms arrived in Ireland.  Their leader was Richard de Clare, better known as Strongbow.  Now Diarmait MacMorrough was set to challenge Rory O’Conor for the title of high king of all Ireland, however, he died before he could achieve this.  It is unlikely that MacMorrough ever intended to give Strongbow or the other Normans lands in Leinster.  He most likely intended to use their help to win the high kingship of all Ireland, and as payment for their services leave them with the towns of Dublin, Waterford and Wexford, or may be even force them back to England with nothing.  However, after MacMorrough died Strongbow and the Normans seized control of Leinster.

Watching these developments in Ireland from across the sea, the king of England Henry 2nd made the journey to Ireland in 1171, in order to make sure that Strongbow would remain loyal to him, and would not establish himself as a rival ruler of Ireland.  The king granted much of the lands of Leinster to Strongbow, and Strongbow in turn gave lands to those Norman knights who had helped take the land.  One of these was a Yorkshire man, Walter de Ridelesford, known to his peers as a brave and noble warrior.  Among his grants were lands in Kildare and Dublin, as well as much of the lands around Bray.  The king did not give away all of the lands in Leinster, and in Wicklow he kept for himself lands at Newcastle, and also Glencree where he established a Royal Forest.

After the year 1180 much of the lands in Wicklow that had once been owned by the monastery of Glendalough, came under the ownership of the Archbishop of Dublin.  These included Castlekevin where a large castle was built at the centre of a large estate.  Elsewhere the Archbishop divided up lands amongst his friends and family.  For example he gave land at Hollywood to his nephew Geoffry de Marisco.  In this way much of the lands of Wicklow were redistributed amongst the recent Norman arrivals, and the native Irish ruling families were forced to settle for smaller parcels of lands than they had once owned.