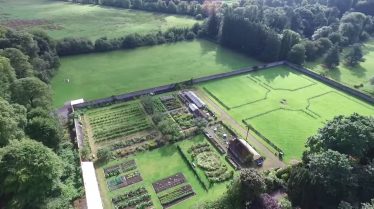 Russborough is to host the Ireland’s Walled Gardens’ Study Day on Friday 2nd September.  A joint initiative of the Irish Georgian Society, the Royal Horticultural Society of Ireland and Wicklow County Council, the study day will explore and celebrate the history and significance, and the care and conservation of Irish historic country houses’ walled kitchen gardens. (Download brochure at end of page)

The impetus for the study day is the wonderful work currently underway at Russborough’s walled garden by a dedicated team of RHSI volunteers.  Denise Gill, Chairperson of the RHSI’s Gardens Committee, who is overseeing this work, welcomed the opportunity to showcase the restoration of the garden, which she outlined entailed ‘the reinstatement of the garden paths to their original layout and dimensions; the repairing of the surrounding brick and stone walls using traditional techniques and materials; the re-establishment of the overgrown vegetable garden; as well as the planting of a hornbeam hedge and creation of a wild flower circle to name some of the initiatives underway’.  She explained that ‘the RHSI’s approach for the restoration works at Russborough was a spirit of respect for the past allied to a strong vision for the future’ and she is looking forward to providing a guided tour of the Russborough walled garden as part of the Ireland’s Walled Garden Study Day.

Deirdre Burns, Heritage Officer, Wicklow County Council, stated that she was delighted to be partnering with the Irish Georgian Society and the RHSI on the Ireland’s Walled Garden Study Day, which is an action of Wicklow County Council’s Heritage Plan, and is being co-funded by The Heritage Council.  She explained that ‘the walled kitchen garden is an integral part of the historic Irish house demesne, however, being labour intensive to maintain, the fate of the walled garden has been bleak and by the middle of the 20th century the majority became neglected, abandoned and overgrown and many eradicated.’  Burns anticipated that the study day would assist in promoting an awareness of the walled kitchen garden as a key aspect of Wicklow’s heritage.  Burns ‘commended the work of the RHSI at Russborough’s walled garden in reversing this trend of dereliction’ and cited it as ‘a good news story of cooperation between one of Wicklow’s most important historic houses, Russborough, and the long standing horticultural charity, the RSHI, who have successfully harnessed an enthusiastic and knowledgeable team of volunteers’.   Burns added that she was pleased to report that in 2015 ‘Wicklow County Council was in a position to provide a grant to the RHSI towards the restoration of the log cabin in Russborough’s walled garden and that work has now been recently completed.’

Donough Cahill, Executive Director of the Irish Georgian Society noted it is ‘apt that the Ireland’s Walled Garden Study Day should take place in Wicklow and with the support of Wicklow County Council, given that Wicklow is celebrated as “the Garden of Ireland”.  Cahill noted that ‘Wicklow has an abundance of historic houses with walled gardens’ and critically he hoped ‘that attendance at the study day would equip those with the responsibility of ownership to ensure that any restoration works were underpinned by a commitment to fully understand, research and survey the gardens prior to commencing works, as well as appraising the impact that any future adaptation will have on their historic fabric and features.’  Cahill concluded by noting ‘that the study day will appeal to the professional horticulturalist and landscape designer, but will also be a rewarding and enjoyable day for the general gardening enthusiast’.

• To book for the Ireland’s Walled Garden Study Day visit the Irish Georgian Society’s website (www.igs.ie) or ring the IGS’s office (01 6798675).  Tickets for the study day are €90. See pdf brochure below for more details

About the Irish Georgian Society

The Irish Georgian Society works to promote and protect Ireland’s built heritage, designed landscapes and decorative arts.  It is a charitable organisation founded in 1958 with 2,000 members.

About the Royal Horticultural Society of Ireland

The Royal Horticultural Society of Ireland, founded in 1816, is a registered charity, dedicated to promoting and improving the knowledge, skill and practice of horticulture, arboriculture and floral arts.