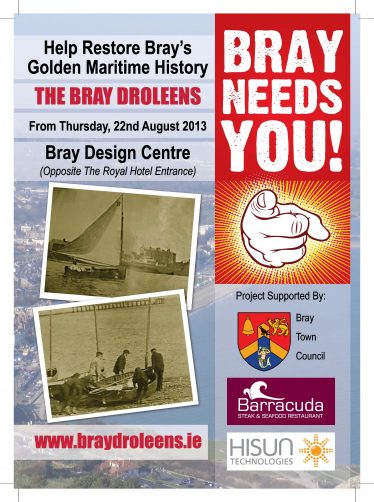 Starting on  Thursday 22nd  August 2013 at Bray Design Centre (opposite the Royal Hotel) agroup of local maritime enthusiasts, supported by Bray Town Council  have come together to resurrect a fleet of boats which once sailed off Bray at the end of the 1800’s.

The Bray Droleens were specifically designed by Mr W. Ogillvy to be sailed off the Bray shore.

The group is going to build a fleet of Bray Droleens in collaboration with community and business organisations. By doing so, the aim is to promote, restore and record some of Bray’s maritime golden history.

The group would love to hear from anyone with information on the original boats or their owners.If any groups, organisations or individuals who would like to get involved or indeed volunteer to help build one of these boats, please contact  braydroleen@eircom.net.

Over a three week period, Bray’s community will join together on a rotational basis at The Bray Design Centre (Opposite Entrance to The Royal Hotel), led by a team of experts versed in the art of traditional boat building, to construct the very first Bray Droleen of this fleet.

This project will provide participants with a unique opportunity to learn new skills and have a direct input to restoring part of Bray’s maritime history for everyone to enjoy.

On completion, each team / group will then have the necessary skillset (under expert supervision) to build a Bray Droleen.

By Summer 2014, it is hoped that a fleet of at least six will be available to community groups, businesses and visitors for sailing, fishing, rowing and racing on Bray’s waterfront, adding an additional experience to Bray’s seafront.

The name Droleen was derived from the Irish for  wren “Drolin” . The “Droleens” are a one design dinghy class of boats of the then Bray Sailing Club adopted in the year 1897. The fleet then consisted of eight boats. The boats which were designed for single handed use, would have had a crew of two while racing but can carry up to five, making them ideal family boats. The boats were designed by Mr W. Ogillvy of Dublin and Bray, who was a member of the Bray Sailing Club. These very stable sturdy boats sailed best to winward. It is thought that the boats disappeared due to the majority of their owners not returning from the Boer War.

For further information about this project , please logon to http://www.braydroleens.ie/ or send a signal to The Old Gaffers at braydroleen@eircom.net.