The 1901 census returns are the earliest surviving census records in Ireland and a very good place to start.  Thanks to the National Archives of Ireland, the 1901 and 1911 census records are now freely searchable online.  This is a key source for the family historian as each return can offer a wealth of information on each member of a household, including place of residence, county of birth, age, occupation, children, etc.  The main census forms of interest are: 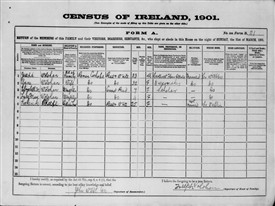 Form A tells us who was in the household on the night of the census.  We also learn whether they were head of household or how they were related to the head, their religion, literacy, age, occupation, marital status and county of birth.

You will notice that Form A in the 1911 Census also provides information on how many years the mother was married, how many children she had and how many survived. 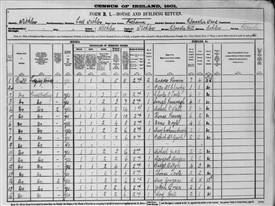 Form B.1. – House and Building Return

As you can see, among the information contained in Form B.1., you learn the village, town, street or townland of residence of your ancestors.  All heads of household within the area are listed, as well as the type and quality of dwellings and the size of each household.

The four types of house were classified as follows:

Ages – a Word of Warning!

Ages can be quite inaccurate on these records.  Vanity may have been a factor, but the more likely explanation is that as people got older, they simply lost track of their age.  Another factor affecting ages on the 1911 returns is the introduction of the old age pension in 1909, payable to those over 70 years of age.  Applications for this pension were checked against the 1841 and 1851 census records (which were still in existence at that time).  So where an individual’s age does not tally between their 1901 and 1911 census return, they may have been mistaken about their age on the 1901 census, thus adjusting it on their 1911 return.