Parish records of baptisms, marriages and burials should be searched in conjunction with the above civil records.  Also, while civil records begin in 1864 (and 1845 for non-Catholic marriages), parish records can potentially bring you back several generations previous to this!  Parish records often contain extra information to that listed on the civil records, and vice-versa.  For example, Godparents on parish baptism records can be useful in connecting earlier generations as well as neighbours of your ancestors.  Equally, civil records of births and marriages contain occupations, where-as Roman Catholic baptism and marriage records do not.  There are also differences between the records of religious denominations.  We will being with a general look at the records of the Roman Catholic Church: 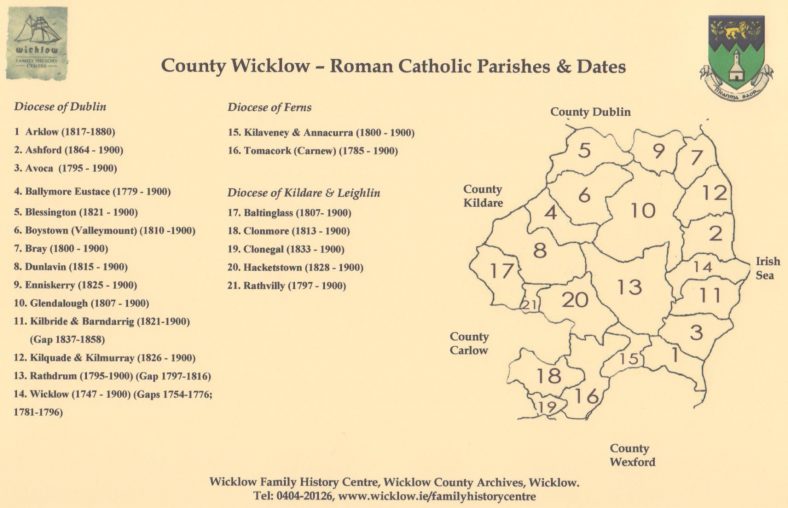 Nearly all Roman Catholic records for County Wicklow are confined to marriage and baptismal records as unlike the Church of Ireland parish records, it was not common practice to record burials in the Catholic Church records.  Entries were recorded in both English and Latin and the usage of either form varies from record to record with both Latin and English often appearing in the same register.  Only first names were translated into Latin, although the English name is often evident from the Latin.  There are difficulties sometimes, for example, ‘Dermetrius’ (Jeremiah or Dermot) and ‘Guilielmus’ (William).  Latin was also used to record marriage dispensations.  Dispensations were used to indicate if the parties were related – the term ‘consanguinati’ was used to note this.  A blood relationship was illustrated by degrees – siblings were first degree, first cousins second degree, and second cousins third dregree.  Therefore a couple recorded as ‘Consanguinati in tertio grado’ were second cousins.  Another Latin term ‘affinitatus’ is also found less frequently in the records.  It records an earlier relationship by marriage between the families of two parties.

Catholic baptismal records usually contain the following information: baptismal (and sometimes birth) date; child’s name; father’s and mother’s name; mother’s maiden name and names of sponsors or Godparents.  The abode of the parents is also often recorded in the register.   The format of marriage records may vary, but the date, names of those who married and names of witnesses are usually always catered for.  Catholic marriage records tend to get more detailed post 1860, with additional information supplied such as the residence of all the people mentioned, ages and parents’ names. 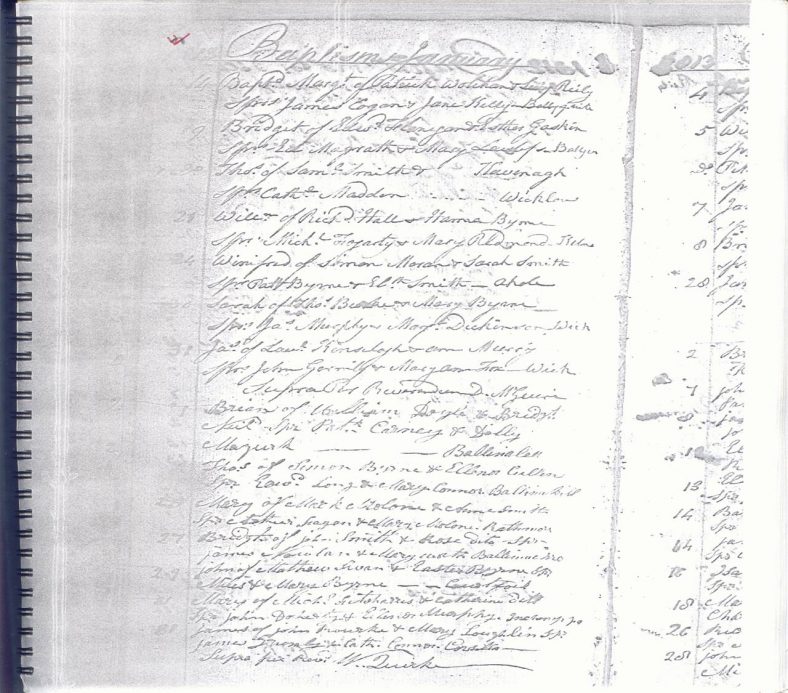 Extract from the Roman Catholic register of Wicklow Parish (1813)

In researching parish records, you will note variations and inconsistencies in the spelling of surnames, Christian names and placenames. Regarding surnames, until the Gaelic Revival at the end of the 19th century, the Irish surname prefixes “O” and “Mac” were treated as entirely optional in Irish records and in the case of “O” in particular where more often omitted than included.

The records for Catholic parishes as a rule do not start until the nineteenth century.  In County Wicklow the earliest records begin in the parish of Wicklow in 1747 a distinction this parish shares with only a few others in the country.  Catholic parishes are generally larger than any Church of Ireland parishes.  This structure has grown up due to the needs of the Catholic Church and the conditions under which it operated between the sixteenth and nineteenth centuries.  Various restrictions made record keeping difficult before the second half of the eighteenth century, although Catholic records for the County of Wicklow are very extensive and cover a large body of people in different areas.

County Wicklow Roman Catholic records can be searched online on the subscription site Rootsireland.ie  and as well as www.findmypast.ie and www.ancestry.com.  The Wicklow records on the rootsireland.ie site go up to 1900, where-as the other two sites’ parish records stop at 1880.  The pages of the original Roman Catholic register books are freely available online at National Library of Ireland (up to 1880).  Also, each parish priest has custody of the original parish registers and access is at their discretion, depending on the condition of the records and the policy of the parish concerned.