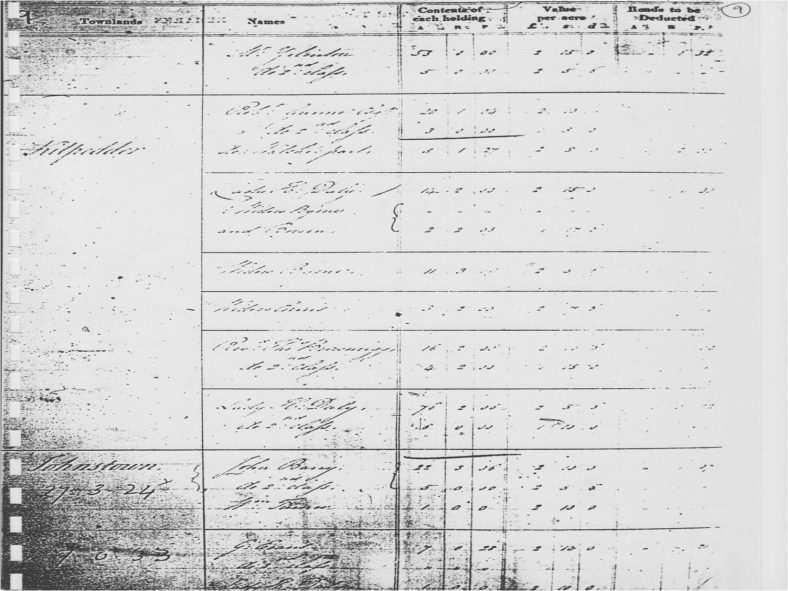 Extract from the Tithe Applotment Book for the civil parish of Kilcoole (1824) showing landholders in the townland of Killpeddar.

The Tithe Composition Acts of 1823 and former years, made provision for the payment of tithes to clergy of the Church of Ireland, which was the established church of the day.  The records were compiled between 1823-1837, when the valuation surveys were carried out in each parish.  Towns and cities were generally excluded as only occupiers of agricultural holdings were liable for the tax.

The Tithe records are arranged by civil parish, and then by townland.  The tenants for each townland are usually listed, but in many cases, only the larger landholders are shown and unlike Griffith’s Valuation, the landlord or immediate lesser of each tenant is not usually given.  Also shown is the amount of acres held, the valuation and tithe payable.  Sometimes, the quality of land is described.  It is interesting to note that the land measurement in the tithe records is given in Irish or plantation acres, as opposed to statute acres in Griffith’s Valuation – where 1 Irish acre is the equivalent to 1.62 statute acres.

These records are now available to search online on the new genealogy website of the National Archives of Ireland.  They can also be researched as part of the services offered by the Wicklow Family History Centre.