The previous articles have described the various genealogical sources available for County Wicklow.  This case study of a Wicklow family will demonstrate how to use these sources.

Our starting point is Bernard Short, who according to family knowledge, was born to Daniel Short in Killoughter before 1900.  He died in Dublin in the 1950s.  The first step was to check the 1911 Census for Bernard.

As you can see below, Bernard is listed on the 1911 Census for Killoughter, aged 26 years, along with his parents Daniel and Jane Short and his siblings Anastasia, Elizabeth, Robert, Eugene and John. 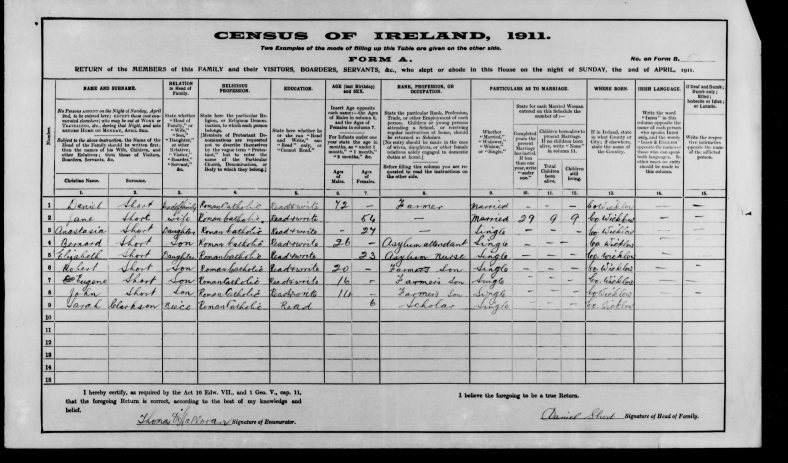 1911 census return for the Shorts of Killoughter, County Wicklow

You will note the couple state they had nine children in total and all were living at the time of the census.  This possibly gives an indication of the family’s standard of living, as sadly it was very common in those days for children to die in infancy.  We also learn approximate years of birth for each person listed, as well as occupation.  Indeed, it is intersting to note that Bernard and his sister Elizabeth were described respectively as “asylum attendant” and “asylum nurse”.

Jumping back ten years to the 1901 Census, we find all nine of Daniel and Jane’s children present, ranging in age from the eldest Anastasia aged 20 years, to the youngest John aged four years.  It is interesting to note that Daniel’s stated age of 56 years does not tally with his age of 72 years listed on his 1911 census return!  Please refer to the article on the 1901 & 1911 Census for a possible explanation! 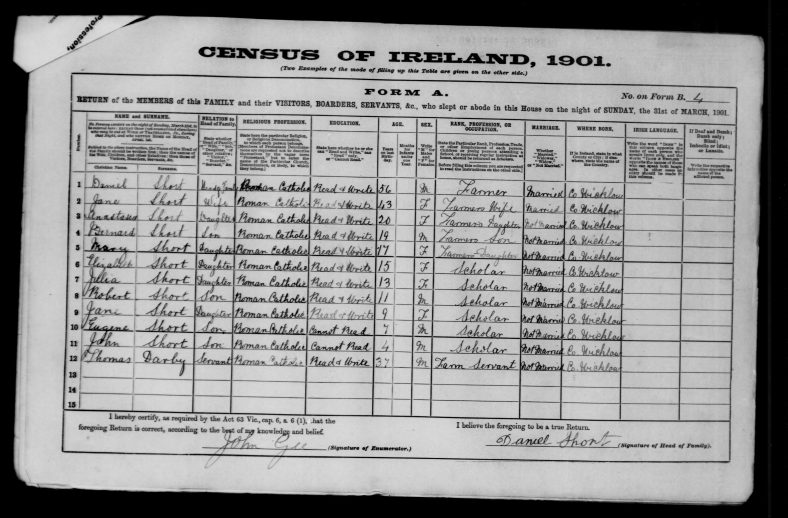 1901 census return for the Shorts of Killoughter

Before searching for the marriage of Daniel and Jane Short, which will hopefully provide their fathers’ names and thus a foothold into the previous generation, we must identify Jane’s maiden name.

Beginning with the civil records, a search of the free index of births on www.familysearch.org was conducted by entering the surname Short and under the “parents” tab, entering Daniel and Jane.  This kind of search is not always fruitful on this site, but on this occasion, we are lucky that more information than just the index information was entered for this family.  otherwise individual records are available on the free site www.irishgenealogy.ie .  As you can see below, the birth records of two of Daniel and Jane’s children were listed, providing Jane’s maiden name of Magee.  (Full birth certificates can then be viewed on www.irishgenealogy.ie or official copies from General Registers Office). 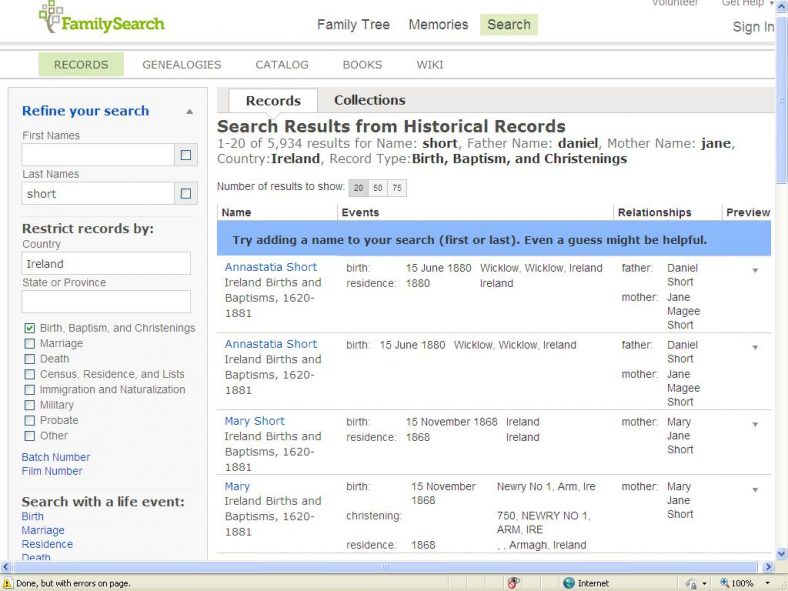 Results of search for Daniel and Jane Short on www.familysearch.org

One of the reasons this search was quite effective on this site is because the Short surname is relatively unusual, making it easier to identify the correct family.  A search of the marriage records on www.irishgenealogy.ie produced the marriage of Daniel Short and Jane McGee in 1879 (it is interesting to note that the couple gave their year of marriage in the 1911 census as 1882, but it is a good idea to always allow a margin of error with these records):

Looking at the option of searching the parish records instead, if using the fee-based site www.rootsireland.ie, a search of the County Wicklow baptism records entering the parents’ names of Daniel and Jane Short will produce the baptism records of the nine children born to this couple, and each record can then be viewed: 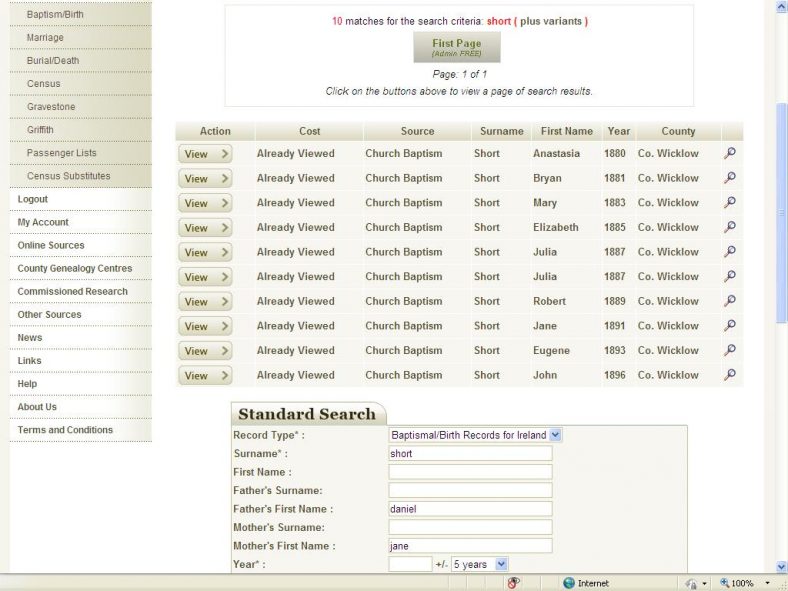 Results of search on www.rootsireland.ie for baptisms of the children of Daniel and Jane Short

Searching the marriage records on www.rootsireland.ie produces the 1879 entry in church register, providing almost the same information as the civil record version of the marriage.  (Sometimes, the Roman Catholic parish register lists both parents of the bride and groom, so it can be worthwhile to check this version of the record when possible).  As the above civil version of the marriage showed, we learn that Daniel was the son of Brian and lived in Killoughter at the time of his marriage, while Jane was the daughter of Robert and lived in nearby Carrigower.  It is often worthwhile to check the parish record version of the marriage record as sometimes the priest noted both father and mother of the bride and groom.  (It is interesting to see that Daniel and Jane followed the naming traditions of the time where the eldest boys were named after their grandfathers). 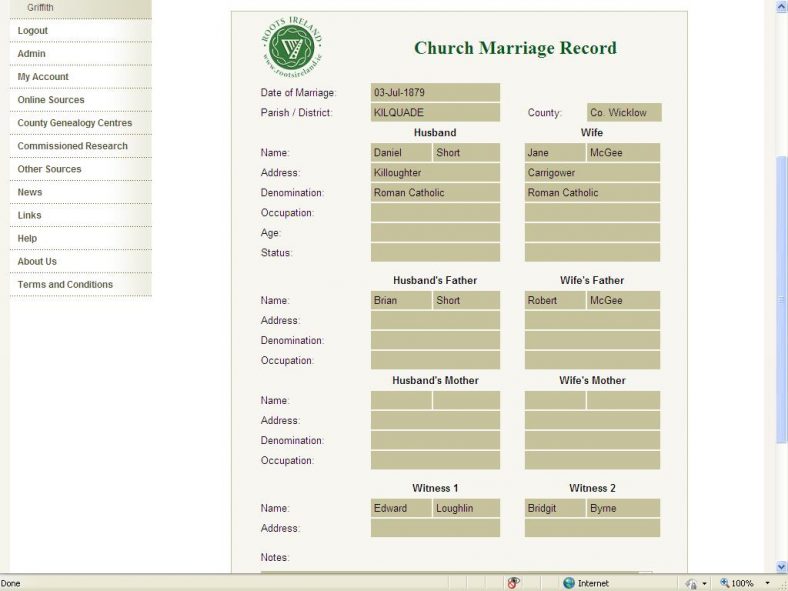 This marriage record provides a foothold into the previous generation of Shorts.  As Daniel married in 1879, his birth occurred before 1864 when civil registration began in Ireland, so we must search the parish records for his baptism record.  Returning to the rootsireland site, see below details of the baptism of Daniel Short in 1838, the son of Brian and Anastasia Short nee Cullen: 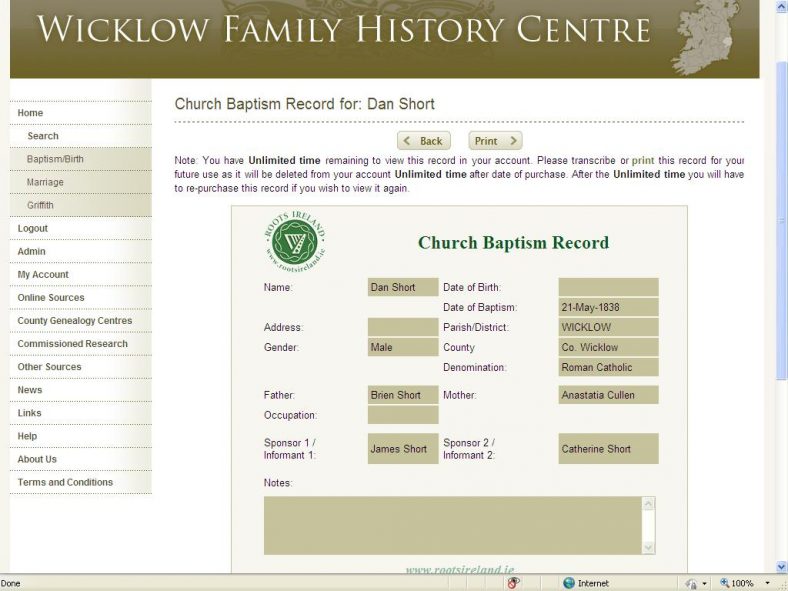 Bear in mind that the records on this site are transcribed as they appear in the parish register.  As you can see in the above baptism, Daniel appears as “Dan”, his father Brian as “Brien” and his mother Anastasia as “Anastatia”.  To give yourself the best chance of a result, search for as many variants of a Christian name as possible by using the wildcard search symbol “%”.  For example, instead of entering Daniel in the search box, enter Dan% which will bring up the variants Daniel, Dan, Danny, etc.  Instead of entering Brian, enter Br%, etc.

Brian Short and Anastasia Cullen married in Wicklow Parish in 1832.  Unfortunately, these earlier marriage records do not provide fathers’ names for the bride and groom.  We can assume Brian was born circa 1800.  A search for his baptism record produced a strong possibility: 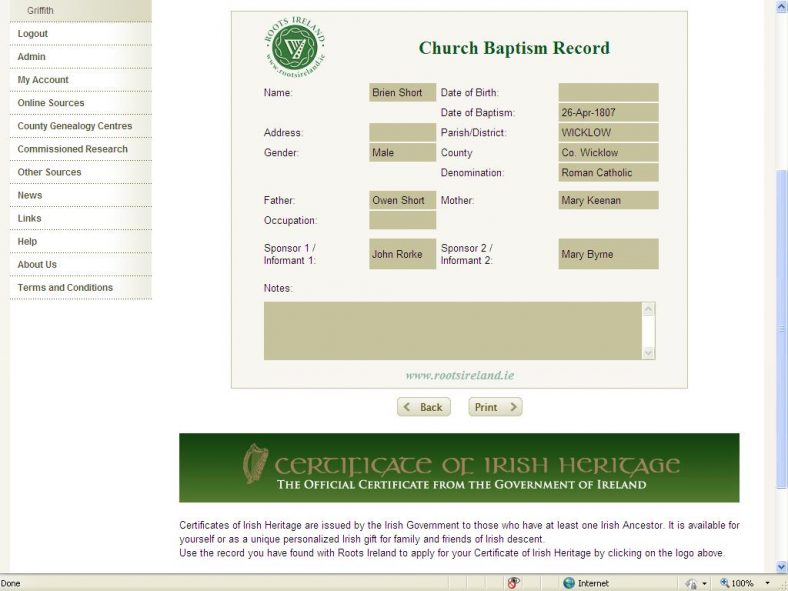 So how do we verify if the above is the correct baptism record for Brian Short, father of Daniel Short?  We can cross-reference with the civil death records (if Brian died after 1864) or we can search for a tombstone for Brian.  (See the article Tombstone Inscriptions: Main Sources for Wicklow Headstones).  Indeed, we are fortunate to have the inscriptions of several Short tombstones at Killoughter Cemetery, including that of Brian Short, and his wife Anastasia: 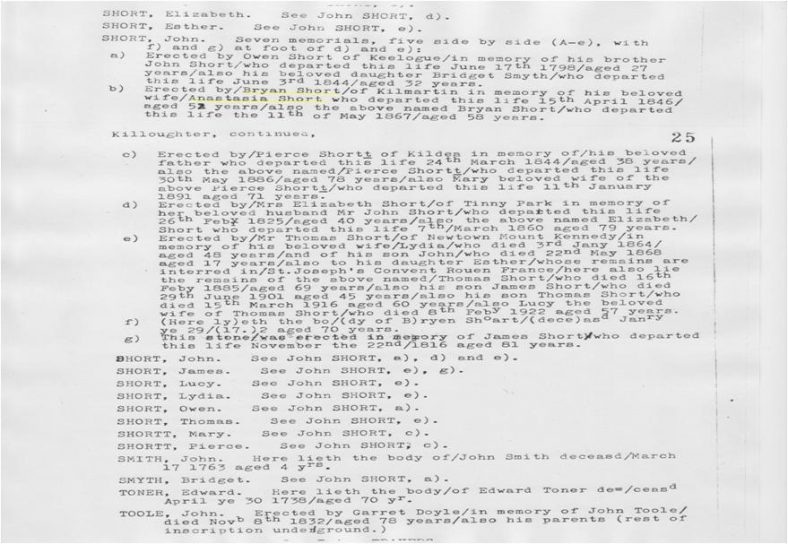 The tombstone states Brian was born circa 1809.  If we check his civil death record on familysearch.org his year of birth is given as 1808.  Both of these sources suggest the baptism found for Brian in 1807 is correct: 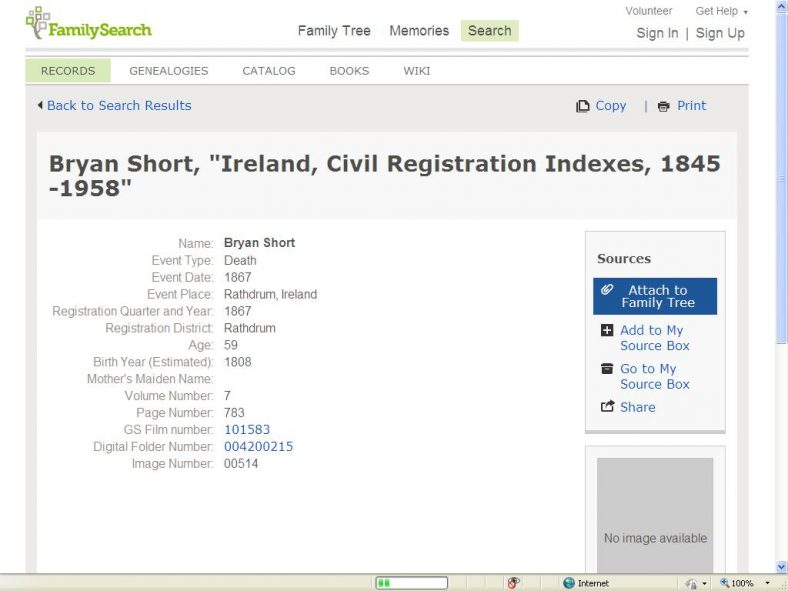 Descendants of the Short family are so fortunate to have these tombstone inscriptions as they provide evidence of several family lines, including some individuals who pre-date the parish registers of baptisms and marriages.

Hopefully, this case study demonstrates how the researcher can use the above records to establish a family line.  The next case study (to follow soon) will show how to use 19th century sources such as Griffith’s Valuation and the Tithe Applotment Books to learn more about your ancestors.