You are here: HomenextTopicsnextGenealogynextOnline ResourcesnextFind your First World War Ancestor 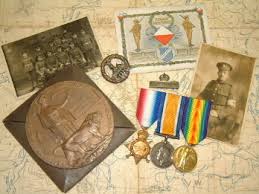 You may be interested in searching for your ancestors on this new site of Ireland’s Memorial Records, which lists 49,000 soldiers from Ireland who died during the First World War or as a result of wounds sustained during battle.

The date of death may lead you to which battle your ancestor died in – there is a list of first world war battles on Wikipedia.

The website established by the Commonwealth War Graves Commission can assist in locating the cemetery where your ancestor was buried.