The admission and discharge registers of the Rathdrum and Shillelagh workhouses can now be accessed online in the digitised collections section of Wicklow.ie.  Dating from just before the Famine in the early 1840s, these registers have only survived for a few counties.  Telling the story of the poor and destitute in stark reality, some of the headings under which information was recorded include:

Each volume begins with a name index, listing individuals in alphabetical order along with their allocated number.  This makes it relatively easy to locate your ancestor as each entry in the register is numbered. 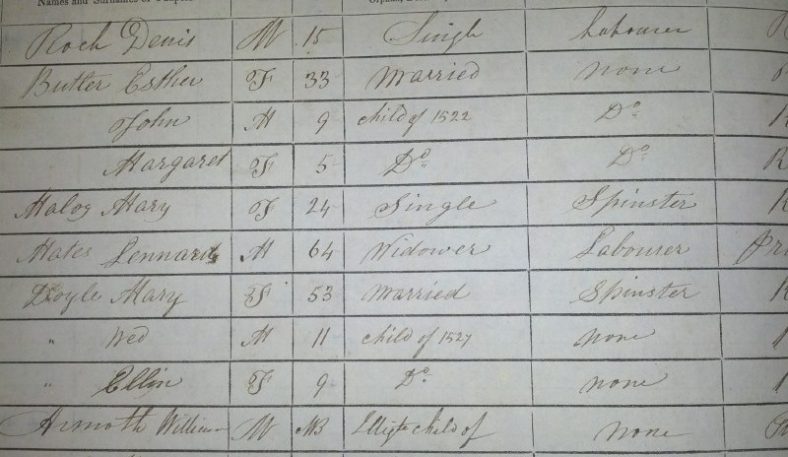 Starvation was a constant threat for the labouring classes. A labourer earned about two to six pence a day if he could find work. Large tracts of land were let at a fixed rent to a single individual on a longterm lease. The middleman, as he was referred to, sublet this land and split the farms into smaller and smaller holdings to increase his profits. This resulted in great misery, as tenants had no security of tenure on their small holdings. They were almost invariably without capital and paid the rent when and if the harvest came in. When the harvest failed, unable to pay rent the tenants were evicted. Many could only wander the roads destitute.

The Rathdrum Workhouse opened its doors to the destitute poor in March 1842.  Built to accommodate 600 paupers, it along with similar institutions throughout Ireland, was ill prepared to cope with the onslaught of the catastrophe of the Great Famine in 1845.   Numbers exceeding thirteen hundred were admitted in 1850.  This institution gradually evolved into a hospital for the poor and in 1922 became St. Colman’s Hospital under the care of the Sisters of the Poor Servants of God (also known as the County Home). 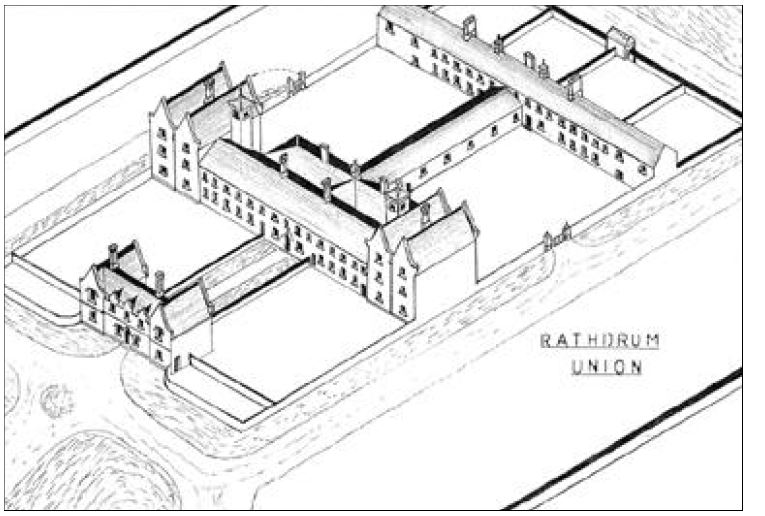 Kevin Byrne’s book Time Did Not Stand Still paints an evocative picture of life in the workhouse, including a description of the equipment purchased and the typical diet:

“When fitting out the building all the usual items you would expect were purchased; 100 sheets, counterpanes, bed ticks (mattress), blankets, all with the Workhouse logo, footwear and clothing for the inmates, “The Workhouse Uniform”. The orders for the kitchen included 200 potato nets sorted at 22d each, one machine for cleaning potatoes at £4, one scraper for stirabout, and 200 iron spoons. Andrew Belton of Rathdrum supplied 100 quart drinking tins at 5 pence per dozen and 100 pint drinking tins at 3 pence per dozen. The Board of Guardians also ordered for the grounds; wheelbarrows, dung forks, spades, hatchets and 24 stone hammers. The most expensive items purchased were the furniture for the Board Room, which included one oak table at £8 10s 0d, one elbowed chair, 24 oak chairs, a hat rail, a press for papers and a large deal table with four drawers and locks, with an arched centre. 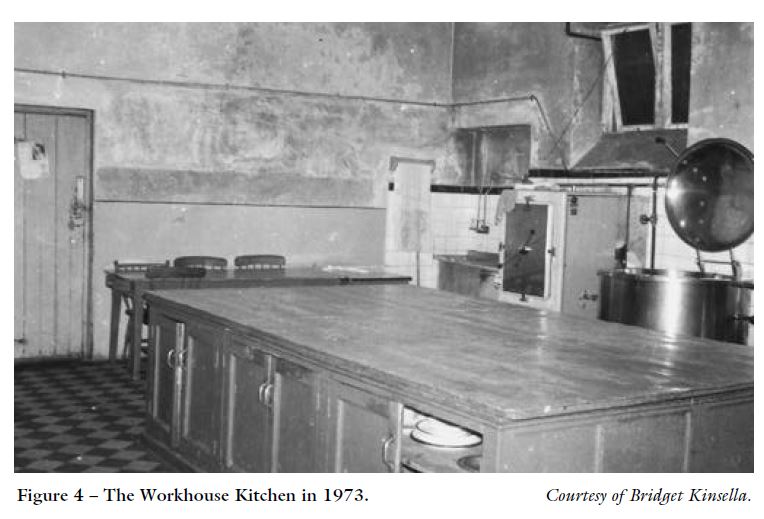 The Workhouse kitchen in 1973 (see above) provides a realistic view of this very important part of the building…..on opening, the Board of Guardians ordered that only two meals be served per day. These consisted of oatmeal stirabout and potatoes with buttermilk”:

Diet in the Rathdrum Workhouse, 1847

Shillelagh Union was established on 20 July 1839 and the poorhouse opened on 18 February 1842 with accommodation for 400 people.  Situated on a six-acre site half a mile to the south west of the village, It was built like other workhouses, to the design of architect George Wilkinson.  Consisting of three blocks, the admissions building contained the porter’s office, probationary wards and the Guardians’ boardroom; behind was the main building, also known as the able-bodied quarters. It housed the dormitories, school and dayrooms and master and matron’s accommodation. The third block contained the infirmary and lunatic wards. The dining hall, which doubled up as the chapel, connected the main building with the infirmary. Kitchens and washrooms were in an annex behind the main workhouse. The whole complex was divided into male and female compartments and surrounded by high walls.

The Famine created an unprecedented demand for workhouse places and by January 1847, Shillelagh Workhouse was declared full. Admissions reached an all-time high in February 1850, with more than 800 inmates recorded as receiving relief in Shillelagh.

By early 1847, fever had reached epidemic proportions all over the country. Due to the lack of accommodation in the workhouse, new admissions, whether sick or healthy, were crowded into already full wards, leading to the rapid spread of disease. Patients presenting with fever at Shillelagh Workhouse were sent to Carnew Fever Hospital but by 1848, a fever hospital had been erected to the south of the Shillelagh workhouse.  (Information from the Shillelagh Pure Mile Project).

Suffering of the poor

Perhaps the County Archives’ most poignant records, these volumes illustrate the suffering of the poor in the lists of names and descriptions of those admitted to the workhouses of Wicklow, not only during famine times but throughout the 19th and early 20th century.

These records can be accessed online at the following link: https://www.wicklow.ie/Living/Services/Arts-Heritage-Archives/Archives/Collections/Digitised-Collections